Is the worst over for the Russian economy?

For investors, business owners and everybody else with an interest or involvement in the Russian economy, this is now a period of waiting; waiting to see whether the relatively good start to 2015 for the ruble, investment returns and some segments of the economy mean that we can all breathe a huge sigh of relief that the predictions of doom and gloom in late 2014 have not materialized, or whether this is just the eye of the storm and another battering still awaits. 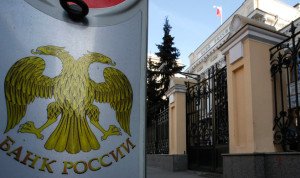 Symbol and headquarters of the Russian State Bank, image by Sergei Karpukhin, Reuters

Equity investors still generally believe the former, and Russian indices are the best-performing of the major markets so far in 2015 with the RTS up 17.5 percent and MICEX 11.2 percent better, although those returns were higher at the end of February. The indices have fallen by 5 percent this month as concerns about growth re-emerge.

The yield on Russia’s 30-year sovereign eurobond is now at 4.9 percent compared to 6.4 percent at the start of the year, and this is despite the downgrade by two of the three international rating agencies of the country’s credit status to junk.

In my last column, I wrote about the surprising strength of the ruble, which has, at least temporarily, suspended its vulnerability to the oil price. Year to date, the ruble has rallied 6.4 percent against the U.S. dollar, with 4 percent of that move since the start of March, during which time the price of Brent crude has fallen 11.5 percent.

The macroeconomic indicators are also generally trending on the positive side of expectations and are pointing to a full-year contraction in gross domestic product of about 3 percent, which would be a positive outcome given the prevailing winds hitting the country.

The continuing positive contribution from import substitution and the substantial increase in federal budget spending have gone a long way to balance out the decline in the consumer and construction sectors and in investment spending.

The state has also played its part in creating the more optimistic backdrop. The Minsk II ceasefire agreement certainly helps because, despite the still-tough rhetoric from EU leaders at their recent summit, it still offers hope of easing restrictions against raising new external debt in the summer or autumn.

The Central Bank’s decision to start easing its benchmark interest rate in anticipation of an earlier, and lower, peak in inflation has also added to the more confident mood as well as reducing debt service costs.

By now you know that there is a “but” coming, and it is a big one. It really is far too early to be confident about the trend in the economy over the medium term or for the next 12 to 24 months. The second quarter was always expected to be the big testing period, and that is the way events are shaping up.

Business and consumer confidence, interest rates and inflation form a big part of what drives activity and investment in any economy, so government spending, which has resulted in a budget deficit equal to more than 10 percent of GDP since the start of the year, and the Central Bank’s change in approach to interest rates are a worthwhile gamble to try and improve confidence and provide short-term stability.

But these actions are a gamble nevertheless. The current administrative measures being employed to support the ruble, including a steady conversion of foreign currencies held in the Reserve Fund into rubles, only have a limited shelf life.

The ruble is unlikely to be able to withstand a falling oil price for much longer. If Brent tracks back to $50 per barrel, or lower, then the ruble-dollar rate will move back above 65. The price of Brent crude moved above $60 per barrel in February because of hopes that there would soon be a cut in U.S. shale oil production and that OPEC may be forced into an emergency supply cut.

Neither has happened. U.S. production continues to rise as technology improvements steadily reduce costs and, in any event, producers are making money at the current oil price on a marginal cost basis.

Saudi Arabia and its Gulf allies are refusing to agree to an early meeting to consider a cut in production, while a deal with Iran regarding its nuclear program will open up the country’s energy sector for investment and eventually lead not only to a restoration of the 1 million barrels of daily output lost since sanctions were tightened against Tehran, but will lead to a longer-term rise in both oil and gas output.

Iran needs the cash to rebuild its economy and will not agree to hold back as part of an OPEC supply reduction deal. If it is announced that a nuclear deal has been agreed, this will knock the oil price further as traders will factor in future supply growth. In addition to the over-supply issues, the steadily rising value of the U.S. dollar, which is reacting to the expectation of a Fed rate rise this summer, is also a negative factor for the oil price.

For investors and business owners, the Russia challenge goes beyond economics and ruble concerns. The Kremlin’s global swagger means that investing in Russia is a lot more difficult than is the case for almost all other emerging economies.

Sentiment, rumors and conspiracies all play a part in creating greater relative volatility and uncertainty, as well as the more tangible factors such as poor rule of law and corruption.

All of which drive the perception of risk and reward and lead to such market swings as, for example, the RTS Index collapsing from over 2,500 to under 500 from May 2008 to January 2009 and then doubling to over 1,000 three months later. We saw the same effect in the ruble market since last September. It is that volatility which both attracts speculative investors and drives longer-term investors crazy.

I recently came across a book, which, while not directly about investment, offers a good template for looking at Russia. Published in 2012, ”Thinking, Fast and Slow” is by Nobel laureate Daniel Kahneman. One of the topics he discusses is how and why people initially react to news and then change their stance on reflection. He elaborates on that, and makes it very relevant for the Russia story, in a discussion of “what you see is all there is” or WYSIATI.

In other words, people are far too quick to dismiss what they actually see and instead try to create conspiracies or other factors that are simply not there. We see a great deal of this with regard to Ukraine and even recently, Putin’s absence from public view has led to dozens of conspiracies and will be a factor in investment risk perception for weeks, if not months. Simple explanations based on WYSIATI are almost always dismissed when it comes to Russia.

Another of Kahneman’s discussion points is about “regression to the mean,” i.e. nothing ever stays bad or good forever. We saw that with the stock market and the economy in 2008-09 and it provides an explanation as to why investors were willing to pile into Russian equities in January and February.

It also helps explain why there is greater optimism concerning the ruble and the economy today than there was at the end of last year. However, based on the visible facts, it is far too early to assume the worst has passed.