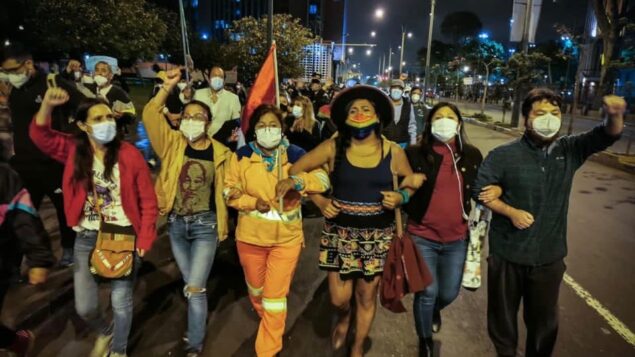 Members of the progressive New Peru Party on the streets on November 9 to protest the coup d’etat against Martín Vizcarra. Photo: Nuevo Perú

What are the forces behind Peruvian president Martín Vizcarra’s impeachment following a rapid and bizarre session of the Congress? Who stands to benefit? Why have thousands taken to the streets to protest?

Peruvians have  been taking to the streets to reject the impeachment and removal of Martín Vizcarra from the office of president on Monday, November 9. After a four-hour debate in the Peruvian Congress on Monday evening, Vizcarra was impeached with 105 members of Congress voting to remove him on account of “moral incapacity” due to his alleged involvement in acts of corruption. The impeachment is the tipping point in a conflict between the legislative and executive branches of government of Peru which had intensified in the last two years.

Congressional leader Manuel Merino of the center-right Popular Action party was sworn in as president on Tuesday. Merino’s party had been in the forefront of the impeachment.

The decision sent a shockwave through Peruvian society and hundreds spontaneously took to the streets on Monday night. On Tuesday, progressive movements and organizations called for their members and allies to stage protests in cities and towns across the country and they continued on Thursday. The massive protests have been met with heavy repression. Police have detained dozens and attacked protesters with tear gas and water cannon tanks. During the protests on Thursday, journalists from AFP, El Comercio and other outlets were injured by pellet guns and tear gas canisters.

“On Monday we were hundreds of people in the streets, and by Tuesday we were thousands, mobilizing against what is, without a doubt, a coup d’état,” said Lucía Alvites a member of the Peruvian people’s movement La Junta and a pre-candidate for Congress with the New Peru left political party.

The situation in Peru and the deep rejection of impeachment by the people can be confusing for some. Martín Vizcarra is far from a progressive leader and does not represent the interests of the working-class and progressive movements. Why are thousands on the street rejecting his impeachment and even calling it a coup?

Alvites explained that the widespread protests are about what the impeachment implies and seeks to achieve beyond the removal of Vizcarra. “The massive rejection by the people has to do with the degeneration of the traditional political class that is represented, above all, by the Congress,” Alvites said. “The people are rejecting this corrupt and rotting political class and this political system that is outdated and subordinated to the interests of big business owners,” she elaborated.

For her, the 130 members of Congress, with some exceptions, do not represent or work in the interest of the people. Peru has recorded over 930,000 cases of COVID-19 (the 12th worst affected country) and has had one of the highest mortality rates in the world (over 35,000 deaths). The serious public health crisis has also triggered an economic emergency, with a majority of people worried about basic issues of survival such as food, making ends meet and paying rent. However, the members of Congress, instead of uniting to address these pressing issues, have focused on the impeachment and removal measures, stirring up crisis and chaos in an already unstable moment. 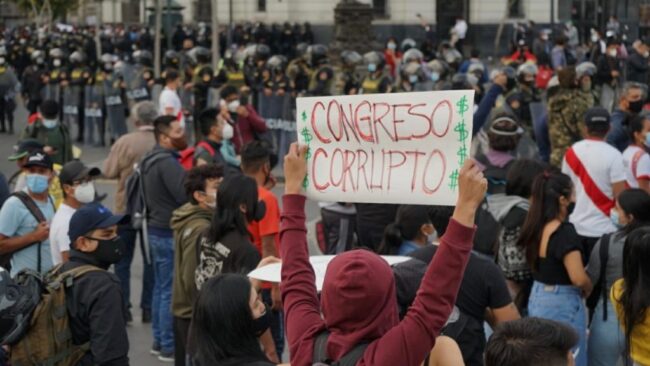 Corruption and the rejection to corruption have been at the center of Peruvian politics for the past couple of years. Following Pedro Pablo Kuzcinksy’s impeachment and resignation in 2018 over a series of corruption charges, the then vice-president Vizcarra who assumed the presidency in March 2018, vowed to double down on the fight against corruption.

Ironically, once again, it was corruption allegations against Vizcarra (which are under investigation by Peru’s attorney general) that were the motivation for the impeachment motion supported by a group of senators from the right-wing parties Popular Action, Alliance for Progress, Popular Force, and others. Social movements have stated that while they of course do not condone corruption or support Vizcarra, they believe that the corruption allegations should have been resolved by the court, and not in the hasty impeachment hearing.

In July, a new battle had erupted between the executive and legislative branches over a proposed constitutional reform to end parliamentary immunity. The reform was brought to Congress by Vizcarra as part of his vow to fight corruption. The measure was swiftly defeated by Congress on July 4. Following this, Vizcarra announced that he would bring the proposed reform to a referendum in April 2021 during the general elections so that the people could decide whether or not members of Congress should have to face the justice system for crimes committed during their mandate. He also proposed to add a ban on political participation for those who have been sentenced for crimes with more than a four-year sentence.

Congress responded with a counter proposal. This involved ending immunity for high-ranking officials of the executive branch and constitutional court, and modifying elements of the parliamentary immunity. Even this ‘concession’ came with the caveat that it had to undergo a second round of approval.

In September, members of Congress pushed the first impeachment motion against Vizcarra which was approved but the attempt to remove him from office failed.

For popular leader and pre-candidate Alvites, these legal maneuvers by Congress have been carried out with the goal of maintaining their parliamentary immunity. “They want to be able to protect themselves so that they do not have to go through a legal process and face the justice system,” she said.

In addition to attempts to ward off corruption investigations and penalties, the move was also motivated by the upcoming elections in Peru, allege Alvites and other left, progressive leaders in Peru. “We are five months away from general elections and these groups that have supported the impeachment do not have good chances in the upcoming elections and opportunistically they put themselves in charge of running the country,” she commented.

She noted that this could be in an effort to better position themselves as candidates. Alternatively they could use the executive authority to postpone elections, using the COVID-19 pandemic and political turmoil as an excuse.

Alvites concluded that, “What they are doing in practice is bending the people’s will because they know that they do not have any appeal with the citizens. The Peruvian people do not believe them. They want them all to leave, and that is why we are marching.”

Alvites’ party, New Peru is part of the Together for Peru alliance and led by Verónika Mendoza. They have, for months, has been calling for the ‘refoundation’ of the country. This call has only been strengthened given the recent events. They believe that it is essential to fundamentally rethink and rebuild the structures and institutions of  the country in order to create a state that works for the people and promotes their interests. Part of the refoundation process involves the drafting of a new constitution. This aligns with similar steps taken by progressive governments across the region as part of their respective projects for rebuilding their nations ‘founded’ in the 19th century as bourgeois democracies. 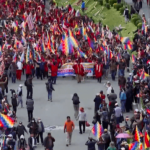 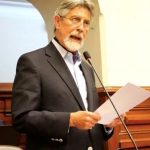