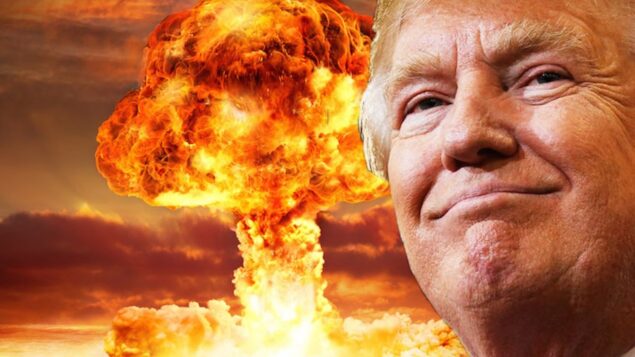 The abstract of a report Dimitris Konstantakopoulos gave to an international conference on NAM, organized by the Paris I Sorbonne and Havres Universities, on February 20-22, 2021.

War, expansion and imperialism have been some of the main paths used by the western capitalist system, in order to overcome its crises and impasses, as proved by colonialism and WWI and II. For a century, we have also been witnessing a clear  totalitarian  tendency  inside  Western  capitalism  leading  to war, in perpetual antagonism with other, more moderate tendencies. Behind the supposed “anti-war”, “anti-establishment” profile cultivated by Donald Trump, we can easily discern the representatives of the pro-war tendency.

It is true that the appearance of the nuclear weapon deeply modified war tactics and strategies, but it did not abolish  the  above  stated  truths.  The quest  for crushing  nuclear  superiority,  ultimately permitting winning a nuclear conflict, without having to suffer unacceptable cost as a result of retaliation, continues unabated to our days. Most people believe a nuclear war is not possible, or at least probable. But this is not true, and a nuclear conflict represents a very real risk. As technology becomes more and more complicated and uncontrollable and all sorts of social and international conflicts get more and more serious, the risk of a catastrophic war tends to increase, not to decrease.

Only the belief in the possibility of being able one day to launch a nuclear war (or to threaten with such a war) and the desire to do so can explain why the USA took the initiative to dismantle nearly all the arms control structures established during the Cold War (ABM, INF, Open Skies Treaties). Trump followed a very aggressive nuclear policy, as he moved from Obama’s “never-ending-wars” to the preparation of “cataclysmic” wars.  Behind this supposedly pacifist, isolationist, pro-Russian president, it is easy to find the most extremist and even irrational powers Western capitalism and imperialism has produced (Netanyahu, Neocons, Pompeo, Bolton, Christian Zionists, Extremist Zionists, Johnson, Bolsonaro, European Far Right etc.). Ii is not the first time in history that the international Far Right is hiding its real programme behind a pro-peace, anti-establishment mask. Adolph Hitler was also elected as a “Socialist” and he pretended quite successfully to be a friend of Moscow. Such illusions were not dissipated until June 22nd 1941.

Irrationalism  and  incoherence  are  the  dominant  characteristics of Trump’s political discourse. During the first imperial expeditions of the Neocons (Iraq War etc.), their imperialist project, in spite of its over-ambitious character, could be considered as having a realistic chance of success; it was therefore sold as a rational imperialist project to the US and other Western citizens. The neocon political discourse (Bush, Cheney, Nuland etc.) corresponds to such a situation.

But in 2017, in order to stop Russia in the Middle East, and to overthrow the Iranian regime, you have to resort to the threat, or the use, of nuclear arms. This is impossible to sell to a normal Western public. You therefore need a classic totalitarian regime and great doses of irrationalism. People with Trump’s mental and psychological structure only appear when history has to deliver disasters.

Given Trump’s climatic, nuclear, and Middle Eastern policies, and the ideology he is promoting, his removal from one of the main power centres of the still dominant western capitalist system has diminished the  probability  of  a  global  disaster.  But his defeat  is  not  final.  As  for  the opposing  camp  in  the  leadership  of  western  capitalism,  it is  also characterised  by  clear totalitarian tendencies, albeit different in their forms and methods. But, at least, Biden’s tendency seems to understand that, even to be able to dominate the world, the world must exist!

Dimitris Konstantakopoulos is a former adviser to the Greek Prime Minister Andreas Papandreou and former Member of Secretariat of the Central Committee of the SYRIZA Party.