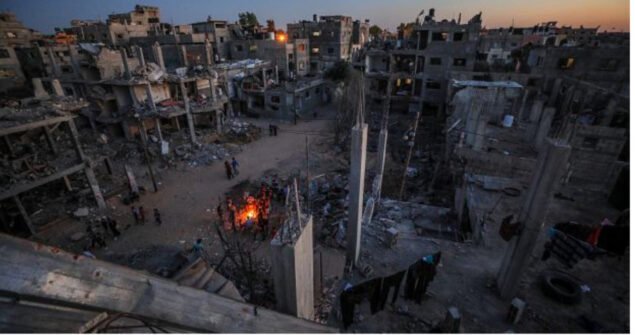 Ireland has become the first EU member state to declare the building of Israeli settlements in Palestinian territories as de facto annexation, after the Dáil on Wednesday night passed a motion tabled by Sinn Fein.

By Marie O’Halloran and Ellen O’Riordan

Ireland has become the first EU member state to declare the building of Israeli settlements in Palestinian territories as de facto annexation, after the Dáil on Wednesday night passed a motion tabled by Sinn Fein.

The Dáil rejected, however, a proposal to expel the Israeli ambassador to the Republic and impose comprehensive sanctions against Israel by 87 votes to 46, with no abstentions.

A spokesman for Israel’s foreign ministry said it “outright rejects” the motion.

Lior Haiat said on Twitter that Ireland’s “outrageous and baseless” position regarding some Israeli settlements reflects a “blatantly one-sided and simplistic policy” and constitutes a “victory for extremist Palestinian factions”.

“The motion distances Ireland from its ambition to contribute and play a constructive role in the Israeli-Palestinian context,” he wrote.

Mr Haiat said the vote followed “unacceptable anti-Israel statements that were heard in Ireland at a time when the citizens of Israel were being subject to terror attacks by the more than 4,000 rockets that were launched from the Gaza Strip by the Hamas terrorist organization.”

The Government had in a debate on Tuesday night supported the Sinn Féin proposal and Minister for Foreign Affairs Simon Coveney said during debate on the issue that “we need to be honest with what is happening on the ground and call it out” as “de facto annexation”.

He added that the Republic is the first EU country to state this and it could be a message to the global community.

Mr Coveney echoed the comments of Sinn Féin foreign affairs spokesman John Brady, who said that “we are baldly stating that Israel is acting illegally under international law”.

Sinn Féin had accepted for their motion a Government amendment condemning the actions of militant Palestinian group Hamas.

A Cabinet meeting was held on Tuesday and agreed to back the Sinn Féin proposal if the party included reference to violence “on all sides in the conflict”, following intense violence in the Gaza region over the past two weeks before a ceasefire was called.

More than 240 Palestinians have been killed in the outbreak of violence, including 66 children, with 10 Israeli deaths, including two children.

Mr Coveney had said he found it “deeply troubling” that Sinn Féin could not bring itself to also condemn the actions of Hamas for also killing children and innocent civilians.

However, when the Minister insisted in Tuesday’s debate on the condemnation of “the killing of civilians by both sides in this conflict”, Sinn Féin accepted this amendment without a vote.

People Before Profit TD Richard Boyd Barrett, speaking before the vote on his party’s amendment, described it as “historic” and said that it was the first time the Irish parliament would vote on the expulsion of the Israeli ambassador.

“Most likely it is the first time any parliament in the EU has held such a vote,” he said.

The rejected amendment stated that “the Israeli apartheid system through its ongoing ethnic cleansing, brutal state repression and murderous military violence, including four savage military assaults on Gaza in recent years, has no place among the international community of nations”.

It called for the expulsion of the Israeli ambassador and “all Israeli diplomatic staff”, as well as for the application of “a comprehensive package of economic, political and cultural sanctions against the state of Israel, similar to that applied to apartheid South Africa”.

The amendment also called for the maintenance of such sanctions and their promotion within the EU and internationally “until the entire Israeli apartheid system is dismantled and all the Palestinian people enjoy national self-determination and full and equal rights”.