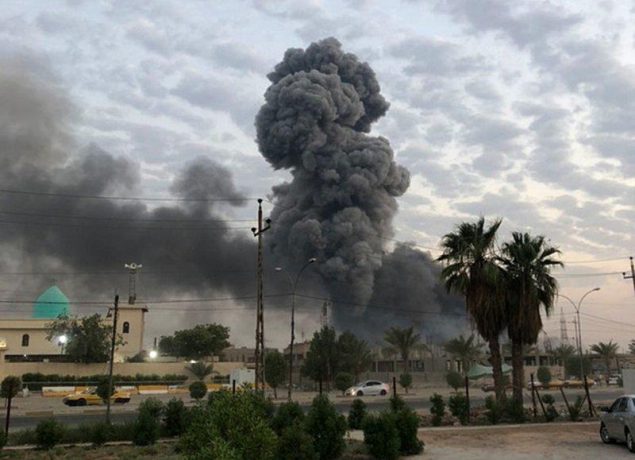 Last week’s blast in SW Baghdad: via the AP

Following last week’s suspected Israeli air raid in Iraq, the country’s government has closed its airspace and says it will down any aircraft violating its airspace.

In what is a severely under reported but perhaps the most alarming development out of the Middle East this week, Iraq’s government has said it’s ready to down any aircraft violating its airspace amid a blanket ban on ‘unauthorized’ flights not specifically approved by the prime minister’s office. Military Times reported the day after Iraq closed its airspace on Thursday:

U.S. military officials in Iraq will now seek out Iraqi approval before launching any air operations, a move made a day after that nation’s prime minister announced a ban of unauthorized flights, including those involving coalition forces fighting ISIS.

Prime Minister Abdul-Mahdi called for an end to all “unauthorized flights” including US drones, spy planes, jets, or helicopters on Thursday. The directive demanded that all aerial vehicles comply with Iraqi law and operations must be under Iraqi government authorization.

The US Coalition on Friday issued a statement saying that it is ready to comply with the order:

The US-led Coalition says it is complying with an order by Iraq's Prime Minister banning airspace access to international aircraft [following a recent claimed US or Israeli strike on an arms dump near Baghdad, which killed a civilian and destroyed c$100m of munitions] pic.twitter.com/qtafT7csEH

The drastic Baghdad decision came after on Monday a massive blast ripped through a neighborhood in the city, which Iraqi officials believe was the result of an Israeli strike on a pro-Iranian militia ammunition depot.

The resulting fire had raged throughout the day not far from the ‘Green Zone’ and sent mortars and exploding munitions across the city, resulting in the death of at least one civilian and wounding of nearly 40 others, many of them children. The weapons base reportedly belonged to the pro-Iran Kataib Sayyid Al-Shuhada militia, and an estimated $110 million worth of munitions were wiped out.

“The prime minister ordered to revoke all special flight permits in Iraqi airspace for reconnaissance aircraft, reconnaissance aircraft with weapons, fighters, helicopters, unmanned aerial vehicles of all kinds available to the Iraqi and non-Iraqi sides”, an official Iraq government statement  said after an Iraqi National Security Council meeting this week.

“All authorities are required to comply with this order. Any flights that violate this regulation will be considered an aggression, which our air defense will immediately respond to,” the statement added.

While there’s been no official government statement out of Baghdad confirming an Israeli jet or drone was behind the attack amid an ongoing investigation, Iraqi militia commanders and military leaders were quick to name Israel, and not for the first time (prior recent ‘mystery’ explosions at Iran-backed militia bases have also been blamed on Israeli). “We believe that the US and Israel were behind these explosions,” one Shiite commander told Arab News.

Indeed even Israeli media has been source of widespread speculation that Israeli planes have been conducting raids in Iraqi airspace of late. All of this also comes as Iraq’s parliament has increasingly voiced anger and frustration at the continued US troop presence even after the Islamic State has been defeated.