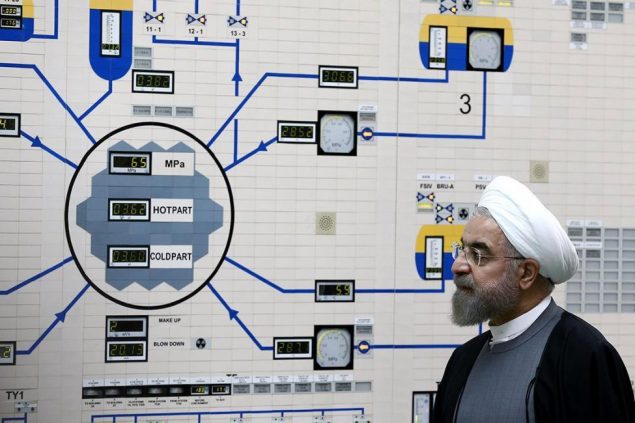 Iran’s Fars News Agency has cited a top Iranian official who said that Tehran would return to its nuclear deal commitments only if it receives $15 billion for oil sales by the end of the year.

Iran’s Fars News Agency has cited a top Iranian official who said that Tehran would return to its nuclear deal commitments only if it receives $15 billion for oil sales by the end of the year.

It appears President Macron’s last ditch effort to create conditions to eventually bring Tehran and Washington back to the nuclear negotiating table by offering Iran a $15 billion credit line as an incentive to come back into compliance with the nuclear deal is making headway. However, the US would have to soften on its harsh 100% Iran oil sanctions to meet Tehran’s conditions for the credit line.

“Iran… will return to full implementation of the JCPOA only if it is able to sell its oil and to fully benefit from the income from these sales,” saidDeputy Foreign Minister Abbas Araghchi on Wednesday. “The French proposal goes in that direction.”

However, massive and significant obstacles remain – not the least of which is that Iran’s President Hassan Rouhani just issued new ultimatums to European signatories to the 2015 nuclear deal. The European powers have another two months to save the JCPOA, Rouhani said in a speech Wednesday.

Meanwhile as details of the $15BN credit line are hammered out, Iran said it’s prepared to take further measures to walk away from its terms under the nuclear deal, likely in the form of another uranium enrichment cap breach, which would mark the third such purposeful violation designed to pressure Europe and Washington.

Rouhani had threatened to take the extra step by Thursday unless France and others act quick: “I think it is unlikely that we will reach a result with Europe by today or tomorrow … Europe will have another two months to fulfill its commitments,” Rouhani said according to state sources.

“The talks between Iran and European countries are moving forward … but we have yet to reach a conclusion,” he added. “Iran’s third step is of an extraordinarily significant nature,” he warned of plans to further remove Iran from conformity to the nuclear deal.

The International Atomic Energy Agency issued a report last week stating Iran is still enriching uranium up to 4.5 percent, which is above the 3.67% stipulated by the JCPOA but still significantly below weapons-grade levels of 90%.

As for France’s $15BN credit line plan, for it to actually work it’s crucial that the Trump administration would have to buy in – which is the main obstacle. A US decision is expected by the end of the week as a French delegation is in Washington to discuss the proposal.