IPCC climate report author: our final plea to the world 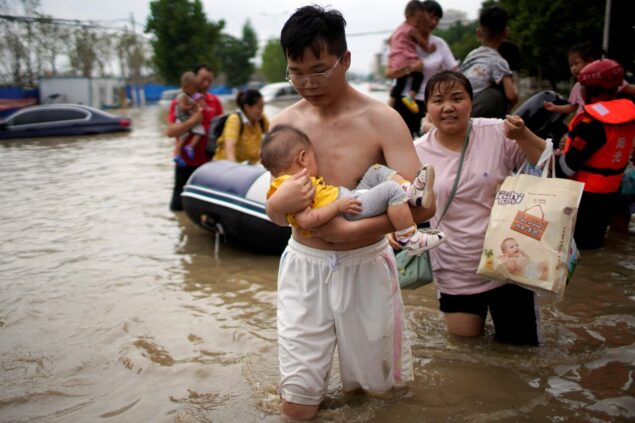 For the first time, the IPCC has been able to emphatically conclude that human influence is responsible for almost all global warming experienced since pre-industrial times. All model scenarios show a breach of the Paris Agreement’s 1.5 degree Celsius target in the early 2030s.

This week, the Intergovernmental Panel on Climate Change (IPCC) released its Sixth Assessment Report on the state of the global climate into a world ravaged by unprecedented wildfires, flooding, heatwaves and disease. The assessment was written by a team of 234 scientist from 66 countries who volunteered our time – alongside the commitments of our regular day jobs – working thousands of hours over the course of three years to draft technical summaries of complex topics, including the causes of chronic drought, modelling sea level rise and changes in regional monsoons.

Our work evaluated more than 14,000 individual climate change research papers that were published since the previous IPCC report was released in 2013. The report then went out for two rounds of expert and government review, after which we faced the gruelling task of responding to tens of thousands of reviewer comments, attending meetings across several time zones to make sure all revisions were implemented. In the end, we responded individually to 78,007 technical queries throughout the review process – all made publicly available in a database alongside the final report, a document well in excess of one million words.

Our latest report is a terrifying catalogue of how climate change is now affecting every continent and ocean on Earth. Warming unseen in 125,000 years. Ocean acidification reaching depths of 2000 metres. Melting glaciers in densely populated lands. Rainfall zones drifting away from continents, slipping towards the poles. Carbon dioxide levels the highest they have been in at least two million years. The burning of fossil fuels is causing such disruption to Earth’s equilibrium that some changes, such as long-term sea level rise and the melting of glaciers, are now irreversible over hundreds to thousands of years.

The assessment clearly highlights how human activities are now causing widespread, rapid and intensifying changes in our climate, making extreme events such as heatwaves, heavy rainfall and droughts more frequent and severe. For the first time, the IPCC has been able to emphatically conclude that human influence on the climate system is an established fact. Humans are responsible for virtually all of the 1.1 degrees Celsius increase in global average temperature experienced since pre-industrial times, swamping natural processes that have dominated for millennia. Our latest report also shows that the rate of warming is now accelerating, with temperatures observed between 1970-2020 rising faster than any other 50-year period over the past 2000 years, with no slowdown in sight.

Another new feature of this IPCC report is a specific chapter that assesses changes in the water cycle, the section of the report on which I was a lead author. After evaluating evidence from around the globe, we concluded, with high confidence, that human-caused climate change has driven changes in the global water cycle since at least the mid-20th century. We found that a warmer climate intensifies both very wet and very dry weather, influencing the impacts of flooding and drought across the world.

As the planet has warmed, we have seen an increase in the frequency and intensity of heavy rainfall and flooding. Extreme rainfall events are becoming more likely because a warmer atmosphere is able to hold more moisture – about 7 per cent more for each additional degree of temperature – which makes wet seasons and rainfall events wetter. Recently observed extremes, such as the devastating conditions experienced in northern Europe, China and India in July, are exactly what we expect as climate change continues to play out. Close to a year’s worth of rain fell in just three days in the Hunan province in southern China, resulting in catastrophic flooding that affected close to 14 million people. If this is the type of extreme rainfall we can experience with just 1 degree Celsius of warming, it’s frightening to think about what the impacts will be under higher levels of global warming.

The evening news now looks like a disaster movie. As a climate scientist, I know it’s far worse than that – it’s the reality of a rapidly destabilising world.

Warming over land also drives an increase in evapotranspiration – the combined process of evaporation and the release of water from leaves – which has increased the severity of drought in places including the Mediterranean, western North America and south-western Australia, particularly since the 1970s. As these regions continue to warm and dry out, extreme fire weather conditions are becoming more common. The summer wildfires that are currently devastating places such as Turkey, Greece, and California are – once again – precisely what scientists expect to see more of as our climate continues to warm.

Releasing our report against the backdrop of these disasters makes me hope people no longer need to use their imaginations to picture climate change – it’s here, right now, part of life for every single person on the planet. The evening news now looks like a disaster movie. As a climate scientist, I know it’s far worse than that – it’s the reality of a rapidly destabilising world.

One of the most confronting conclusions of the IPCC report is that all the climate model scenarios it assessed see us sail through the Paris Agreement’s 1.5 degrees target in the early 2030s. Global warming will continue to increase until at least 2050 under all emission scenarios, breaching 2 degrees sometime around mid-century unless deep reductions in carbon dioxide and other greenhouse gases such as methane occur. In a nutshell, unless there are immediate, rapid and large-scale reductions in greenhouse gas emissions, the Paris Agreement targets are beyond reach.

The report explains that global warming stays below 2 degrees during this century only under scenarios where carbon dioxide emissions reach net zero by 2050. Right now, global emission pledges submitted as of 2020 under the Paris Agreement – known as Nationally Determined Contributions, or NDCs – are insufficient to achieve either of the low emission scenarios assessed in the report (SSP1–1.9 and SSP1–2.6).

More than that, these low emission scenarios include varying levels of what is termed “negative emissions” – large-scale carbon dioxide removal from the atmosphere over a sustained period through unproven and as yet unavailable technologies such as carbon capture and storage, as well as ready-to-implement nature-based solutions such as planting trees and restoring coastal and ocean ecosystems. These are key to Australia’s planned reductions.

If current, global NDC pledges for 2030 are implemented, we would be approximately in line with the IPCC’s intermediate emission pathway, known as SSP2-4.5. This results in global temperature increases of 2.1 to 3.5 degrees above pre-industrial levels by the end of the century, with a central estimate warming of 2.7 degrees.

Given that global emissions are rising despite policy pledges, and the fact that non-linear processes associated with extreme conditions we are observing right now are not well captured by climate models, only focusing on the best-case scenario feels overly optimistic to me. Leaving aside the very real barriers to implementing strong climate policy during a pandemic, these intermediate projections may underestimate the true extent of the physical changes we may experience, so the scientific reality of our true position may catch society off guard.

That brings us to the sobering set of high emission projections (SSP3-7.0 and SSP5-8.5) that result from no or no additional climate policies and a failure to substantially reduce greenhouse gas emissions before 2050. You can think of these as our worst-case scenarios. SSP3-7.0 lies between the intermediate SSP2-4.5 pathway and the lower end of the SSP5-8.5 scenario based on unmitigated fossil fuel use. In this case, we see global warming in the range of 2.8 to 4.6 degrees above pre-industrial levels by 2100, with a best estimate of 3.6 degrees of warming. I consider SSP3-7.0 a realistic possibility based on currently implemented policies – not well-intentioned promises – and uncertainties in climate modelling and the higher sensitivity of temperature to increases in carbon dioxide than previously estimated.

Finally, we have the nightmarish “no policy” pathway (SSP5-8.5) that can be considered the most extreme end of the worst-case scenario, involving high population growth and continued reliance on fossil fuel-based development. This very high emissions scenario is a warning of what could happen if we continue to rely on fossil fuels. The models indicating a temperature increase of 3.3 to 5.7 degrees by 2100 above pre-industrial levels, with a best estimate of 4.4 degrees. While some experts believe that major improvements in renewable energy technology and the overly high sensitivity of some models make this outcome unlikely, it is still considered possible to reach very high levels of greenhouse gas concentrations under lower emission trajectories due to carbon cycle feedbacks that amplify warming.

Consequently, the IPCC report presents the SSP5-8.5 pathway as a useful scenario for examining extreme warming arising from unexpected non-linear processes, such as abrupt permafrost thaw, which are currently inadequately captured by climate models. It also serves as a stark warning of the consequences of weak climate policy and the absence of readily deployable carbon capture and storage technology to remove large volumes of carbon dioxide from the atmosphere.

What really concerns me is how far away scientific reality is from the reality of world politics. The latest IPCC assessment states that at sustained warming levels between 2 and 3 degrees, there is emerging evidence to suggest the Greenland and West Antarctic ice sheets could be lost almost completely and irreversibly over thousands of years. With 2 degrees of warming, committed global mean sea level rise will be about two to six metres over 2000 years. The IPCC estimates that sea level will increase by 12 to 16 metres over 2000 years with 4 degrees of warming, and an inconceivable 19 to 22 metres with 5 degrees of warming – within both the high emission scenario ranges.

Currently at least 10 per cent of the world’s population lives in areas located less than 10 metres above sea level, including the cities of Bangkok, New York, Shanghai, London, Kolkata and Sydney. Such extreme increases in global sea level will completely reconfigure life on our planet, in ways that people can’t possibly imagine.

The scientific community has done its job. We have compiled the most comprehensive global climate assessment humanly possible. We volunteered thousands of unpaid hours because we know that nothing could be more important at this moment in human history than averting planetary disaster. We know better than anyone that decisions being made today will have profound and permanent consequences for the future of our world.

During my time working on the Sixth Assessment Report, it dawned on me that this IPCC assessment is the scientific community’s last chance to really make a difference. If our latest report and the intensifying evidence now all around us doesn’t persuade this generation of political leaders that we must stabilise Earth’s climate immediately, nothing ever will.

Let’s hope the governments of the world are finally ready to listen.

This article was first published in the print edition of The Saturday Paper on Aug 14, 2021 as “Dire warming”.

Dr Joëlle Gergis is an award-winning climate scientist and writer from the Australian National University. She is an internationally recognised expert in Australian and Southern Hemisphere climate variability and change; based in the Australian Research Council (ARC) Centre of Excellence for Climate Extremes. Her research focuses on providing a long-term historical context for assessing recently observed climate variability and extremes.