As officials investigate Egypt plane crash that killed 224 people, a Russian TV channel quoted the wife of a co-pilot as saying her husband had complained about the jetliner’s condition.

SHARM EL-SHEIKH, EGYPT—The Russian jetliner that crashed shortly after takeoff from an Egyptian resort city broke up at high altitude, scattering fragments of wreckage over a wide area in the Sinai Peninsula, Russia’s top aviation official said Sunday as search teams raced to recover the bodies of the 224 people who died. 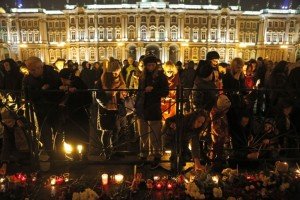 Meanwhile in Russia, an outpouring of grief gripped the historic city of St. Petersburg, home of many of the victims. President Vladimir Putin declared a nationwide day of mourning, and flags flew at half-staff.

Aviation experts joined the searchers in a remote part of the Sinai, seeking any clues to what caused the Metrojet Airbus A321-200 to plummet abruptly from nearly 9,450 metres just 23 minutes after it departed from the Red Sea resort of Sharm el-Sheikh bound for St. Petersburg.

Aviation experts and the search teams were combing an area of 16 square kilometres to find bodies and pieces of the jet. By midday, 163 bodies had been recovered, according to the Egyptian government. Some of the dead were expected to be flown to Russia later Sunday.

In St. Petersburg, hundreds of mourners brought flowers, pictures of the victims, stuffed animals and paper planes to the city’s airport. Others went to churches and lit candles in memory of the dead.

Elena Vikhareva had no relatives aboard the flight, but she went with her son to lay flowers, saying that pain was “piercing” her heart.

Vladimir Povarov and a friend did the same, explaining that they couldn’t “remain indifferent.”

The large area over which fragments were found indicates the jet disintegrated while flying high, said Alexander Neradko, head of Russia’s federal aviation agency. He would not comment on any possible reason for the crash, citing the ongoing investigation. Neradko was in Egypt to inspect the crash site along with Russia’s emergency and transport ministers.

Transport Minister Maxim Sokolov thanked Egyptian authorities for their help and said work on analyzing the data and cockpit voice recorders had not yet begun.

An Egyptian ground service official who carried out a pre-flight inspection of the plane said the aircraft appeared to be in good shape. Speaking on condition of anonymity because he was not authorized to talk to the media, he said he was a member of a technical inspection team that included two Russians.

“We are all shocked. It was a good plane. Everything checked out in 35 minutes,” the official told The Associated Press on Sunday. The closest the plane came to being in trouble, he said, was three months ago when the pilot aborted takeoff halfway through because of a system error. “That’s almost routine though,” he said.

However, a Russian TV channel late Saturday quoted the wife of the co-pilot as saying her husband had complained about the plane’s condition. Natalya Trukhacheva, identified as the wife of Sergei Trukhachev, said a daughter “called him up before he flew out. He complained before the flight that the technical condition of the aircraft left much to be desired.”

An Egyptian official had previously said that before the plane lost contact with air-traffic controllers, the pilot radioed that the aircraft was experiencing technical problems and that he intended to try to land at the nearest airport.

Most airline accidents occur in the early or late stages of a flight, around takeoff or landing, according to Todd Curtis, a former safety engineer with Boeing. “Once you’re in cruise, many of the risks that exist at lower altitudes, from bird strikes to running into things, don’t happen,” said Curtis, who is now director of the Airsafe.com Foundation.

“And ultimately, when you have a problem in cruise, you typically have time to fix it.”

When planes do break up in mid-air it’s usually because of one of three factors: a catastrophic weather event, a mid-air collision or an external threat, such as a bomb or a missile.

With no indication that those events played a role in the crash, Curtis said investigators will be looking at more unusual events, such as an on-board fire or corrosion that caused a structural failure. The flight recorders will provide key information, including the plane’s airspeed and whether it was on autopilot.

“The good news is with the recorders in hand, both the French and Russian investigators should have a good idea in very short time what did occur,” said Jim Hall, former chairman of the U.S. National Transportation Safety Board.

Alexander Smirnov, Metrojet’s deputy director, described the A321 as a reliable aircraft that would not fall into a spin even if the pilots made a grave error because automatic systems correct crew mistakes.

A local affiliate of the extremist Islamic State group claimed it brought down the aircraft, which crashed in the same general area of northern Sinai where the Egyptian military and security forces have battled militants for years. The claim, in a statement posted on social media, provided no supporting evidence. The militants are not known to be capable of downing an aircraft at cruising altitude, although there have been persistent media reports that they have acquired Russian shoulder-fired, anti-aircraft missiles that are effective against low-flying warplanes or helicopters.

Lufthansa, Air France, Dubai-based Emirates and Qatar Airways said they would suspend flights over the Sinai until the reason for the crash is known. British Airways, easyJet and Virgin Atlantic said they were operating as usual in the region and would not comment on flight paths.

Germany’s transport ministry warned the country’s airlines on Sunday not to follow the same route taken by the Russian plane before it crashed. A ministry spokesman, who did not give his name in keeping with department policy, said an existing flight warning for northern Sinai because of the Islamic insurgency would be kept in place.

Russia’s air-safety regulator on Sunday ordered Moscow-based Metrojet to temporarily suspend flights. The transport safety watchdog, known as Rostransnadzor, said Metrojet needed to thoroughly analyze the situation and weigh all risks before authorities decide on Monday whether to lift the suspension.

Despite the order, Metrojet continued operating its six remaining A321s, saying the regulator order meant that planes would be checked one by one and continue flying if they passed inspections.

Excerpt from an article by Paul Koring in the Globe and Mail, Nov 2, 2015:

Investigators in Egypt will look for traces of explosives residues and the tell-tail curling of aircraft aluminum indicative of blastdriven shrapnel puncturing the fuselage.

They will also closely examine the tail of the Airbus A321, which was repaired after it suffered significant damage when the underside of the rear fuselage slammed into the runway during a bad landing in Cairo in 2001. The aircraft, then owned by Beirutbased Middle East Airlines, was out of service for months for major repairs.

In at least one previous air disaster, a faulty repair of a rear pressure bulkhead that – seven years later – failed at altitude, ended in disaster. In 1985, the rear pressure bulkhead failed, blowing the tailfin off a Japan Airlines Boeing 747 and, although the pilots managed to keep the airliner aloft for more than half an hour, it eventually crashed into a mountain killing 520 passengers and crew. Four survived. 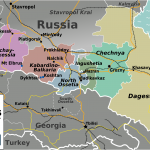