Interview with Ivan Katchanovski, Ph.D., researcher and lecturer at the University of Ottawa, June 19, 2015, for Jyllands-Posten daily newspaper in Denmark (translated to English and posted on Academia.edu.)

How has the Ukrainian investigation in your view progressed over the past six-seven months? 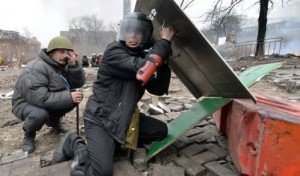 A trial of two policemen from a Berkut special company began in January 2015. They are charged with killing 39 protesters. But this trial, like the investigation, has been delayed, and currently the court proceedings still concern selection of members of the jury. The lawyers of the two arrested Berkut members stated that the 71-volume investigative file of the Maidan massacre does not identify specific protesters purportedly killed by specific Berkut members, and that the evidence of their responsibility for killings of the protesters is based on their presence in the area of the massacre and videos of Berkut shooting from Kalashnikovs there. The investigation established the exact place of the killing for only half of these 39 protesters. The evidence in killings of specific protesters, such as results of ballistic and medical examinations, ammunition, is still not made public by the investigation. A pro-Maidan journalist reported that the government investigation failed to the establish circumstances of killings of nine other protesters.

A report of the International Advisory Panel, which was set up by the Council of Europe, revealed that, contrary to public statements by the Prosecutor General Office, the official investigation had evidence that at least three protesters were killed from the Maidan-controlled Hotel Ukraina and that at least 10 protesters killed from other buildings. However, the version of Maidan shooters killing both the protesters and the police has not been pursued by the investigation in spite of various evidence pointing to them.

One of them is Oleh Ushnevych. A video showing massacre of his group of the  protesters was broadcast by numerous Western and Ukrainian TV channels and social media. This video was likely watched by millions of people around the world, and it was presented as the evidence that government snipers or the police killed these protesters. He is seen falling to the ground during gunfire at 9:44am while trying to run away with a few other protesters: https://www.youtube.com/watch?v=Fns42rViXlA.

In my paper, I cited testimonies of two of these wounded protesters that their group was targeted from the Hotel Ukraina, from which the video was filmed, and from other Maidan-controlled buildings. The revelation made in this report confirms my analysis and provides other evidence that the official investigation is fabricated and that the Ukrainian and the Western media, with some exceptions, misrepresented the massacre. My study, based on numerous videos, two eyewitness reports, and other sources, show that at least 22 protesters were killed in in the same exact area, and the evidence indicates that they were also shot by concealed groups of Maidan shooters from the Hotel Ukraina and other Maidan-controlled buildings. But while the investigation finally admitted presence of “snipers” at the Hotel Ukraina, it still claims that their affiliation remains unknown and it continues to deny that there were any “snipers” in other Maidan-controlled buildings.

A report from the Council of Europe earlier this year criticized the pace and quality of the investigation. Do you expect this to have any impact and do you see any room for Western governments to push for a more transparent investigation?

As my comments above indicate, the Council of Europe report has not had any apparent impact on the progress and quality of the investigation. Interpol recently rejected the Ukrainian government’s requests to put ex-president Viktor Yanukovych, a number of his ministers and the commander and members of the Berkut special company on its wanted list on murder-related charges for the Maidan massacre.

The Western governments have shown little interest in transparent investigation of the Maidan massacre, in spite of it being one the worst human rights violations in Ukraine and entire Europe in recent years. It is almost certain that at least some of these governments, particularly American and British, know from their analysis of open sources and intelligence information that the actual organizers and perpetrators of the massacre were from the Maidan side. The U.S. Congress and U.S. government officials are also aware about my analysis of the Maidan massacre. The office of a senior U.S. congressman requested my academic study of the massacre when the U.S. Congress considered legislation concerning Ukraine. I was informed that my analysis of the massacre was brought by an American scholar to the attention of U.S. diplomats working in the region.

A few days after the mass killing on February 20, 2014, British experts, reportedly working for the government of the UK, examined the site of the massacre. But in their BBC interview, they only revealed bullet impact signs from the positions held by the government forces and failed to disclose easily visible live ammunition impact signs pointing to shooters from the Hotel Ukraina and other Maidan-controlled buildings: http://www.bbc.com/news/uk-26333525.

Results of the British and other Western government assessments of the massacre have not been made public. The puzzling lack of interest in such transparent investigation of the Maidan massacre by governments of the Western democratic countries can be explained by the priority to geopolitical considerations in the internal and international conflict in Ukraine over human rights and democratic values.

Have you been able over the past months to strengthen the case for the views you laid out in your paper last fall?

My findings that Maidan shooters killed and wounded the police and forced them to flee in the morning of February 20 were confirmed by investigative reports produced by BBC and Frankfurter Allgemeine Zeitung on the first anniversary of the massacre. I also completed a revised and updated version of my paper on this anniversary: https://www.academia.edu/8776021/The_Snipers_Massacre_on_the_Maidan_in_Ukraine.

I am preparing a new version of this study for the Annual Meeting of the American Political Science Association in San Francisco [in September]. This version would include important new evidence that I found recently and video appendixes containing relevant excerpts from numerous videos referred to in my paper. My new findings include publicly available but previously unreported videos confirming  presence of “snipers,” spotters, and their coordinators in the Hotel Ukraina, Zhovtnevyi (October) Palace, Kinopalats, Finbank, and Trade Union buildings during the massacre and control of these buildings at that time by the Maidan side. There are several videos, such as a German ZDF video, showing groups of the Maidan shooters who were armed with Kalashnikov assault rifles and hunting rifles and shotguns on the top floors of the Hotel Ukraina at the same very time or within minutes when protesters and a BBC crew were shot from the same floors of this hotel, specifically with Kalashnikov-caliber bullets and hunting ammunition: https://www.facebook.com/ivan.katchanovski/videos/vb.100000596862745/989716864391533/?type=2&theater .

Other videos show one of these groups of armed shooters led by a special Maidan company commander, entering and leaving the hotel Ukraina in presence of Svoboda deputies during the time when protesters were massacred from the hotel: https://www.youtube.com/watch?v=0YUDbQ-4r6w.

The same Maidan commander recently admitted that his unit shot the police in the morning of February 20, 2014 and he issued an ultimatum from the Maidan stage the next day to Yanukovych to resign. I also found videos and a testimony by one of the wounded protesters suggesting that the protesters were lured to the site of their massacre by one of the members of this armed group of Maidan “snipers,” and that this and some other members of his group then went the hotel roof, which was another location of “snipers” reported by eyewitnesses among the protesters.

A recently posted video provides a direct evidence of shooters killing an entire group of Maidan protesters from the Hotel Ukraina near Zhovtnevyi Palace. It corroborates other evidence mentioned in my study, such as eyewitness reports, directions of entry wounds, and bullet trajectories. During the time when this video was filmed at 9:28-9:32am and a few minutes before and after at least 11 protesters were killed and many other wounded in this area. https://www.youtube.com/watch?v=akVXLbkJsX0

I established specific time, locations, likely directions, and eyewitness testimonies concerning killings of the absolute majority of protesters on February 20. My timeline of the massacre was generally corroborated by a precise time-stamped synchronization of various videos. This video synchronization confirms that specific live ammunition shots by government forces in widely reported videos do not coincide with the known exact time of killings of the specific protesters: https://www.youtube.com/watch?v=ZYjEp1C4hzI.

The new finding also point towards the Maidan shooters. But the shooting of some of the protesters by the police still cannot be excluded, because specific location, time, and other circumstances of killings of several protesters remain undisclosed.

How do you rate the so-called “Rossisky Sled,” the view that Kremlin-loyal forces and/or advisers were active on and around Independence Square in February 2014?

Maidan massacre. The head of the Security Service of Ukraine claimed on the first anniversary of this mass killing that Vladislav Surkov, President Putin’s aide, was personally coordinating “snipers” on the Maidan. The claims about Surkov’s involvement in the Maidan massacre were also made then by President of Ukraine and the Head of the National Security and Defense Council, and they were disseminated by the media in Ukraine and the West. However, Serhii Leshchenko, a member of the Poroshenko’s faction in the parliament and a former

Ukrainska  pravda journalist, later revealed that Surkov arrived in Kyiv by plane in the evening of February 20 after the massacre was over.

The Prosecutor General of Ukraine said in his interview in April 2015 that he did not have any information about Surkov’s involvement in the massacre. The head of the investigative unit stated recently that the investigation did not have any evidence of such involvement and that the documents submitted by the SBU head in support of his claims were in fact unrelated to the massacre. This is another confirmation that the Maidan massacre is deliberately misrepresented at the highest level of the Ukrainian government.

*  The Snipers’ Massacre on the Maidan in Ukraine (revised and updated version), document by Ivan Katchanovski, Feb. 20, 2015