Into the Quagmire with Donald Rumsfeld 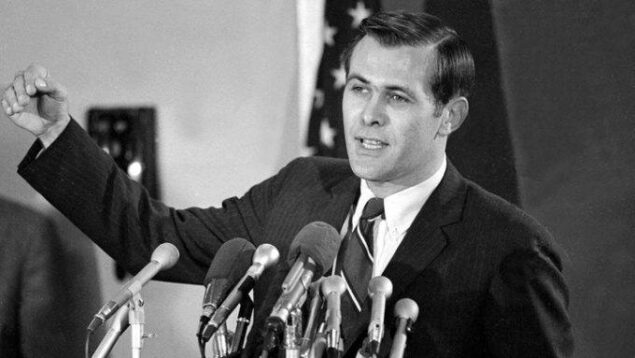 “A ruthless little bastard,” was President Richard Nixon’s verdict on Donald Rumsfeld as recorded by the Watergate tapes – and everything in his career, supremely successful until the Iraq war, confirmed that Nixon had read him correctly.

“A ruthless little bastard,” was President Richard Nixon’s verdict on Donald Rumsfeld as recorded by the Watergate tapes – and everything in his career, supremely successful until the Iraq war, confirmed that Nixon had read him correctly.

Rumsfeld relished such tributes to his toughness, but he was above all else a skilful bureaucratic warrior in Washington and never the warlord he pretended to be. As defence secretary between 2001 and 2006, he gloried in his role as America’s military chief avenging 9/11, but his arrogance and inability to adjust to the realities of the Afghan and Iraq wars produced frustration or failure on the battlefield.

Manoeuvre though Rumsfeld did to avoid responsibility for the Iraq war, he became the living symbol of America’s plunge into the quagmire. Typically, he responded to this by banning his staff at the Pentagon from using the word “quagmire” along with “resistance” and “insurgents”.

Rumsfeld started his career as a Republican Congressman from Illinois and moved on to serve four Republican presidents. He headed the Office for Economic Opportunity under Nixon, became defence secretary and ambassador to Nato in the Ford administration. As President Ronald Reagan’s special envoy to the Middle East, he travelled to Baghdad to shake hands with Saddam Hussein and assure him of US support in the eight-year war that the Iraqi dictator had launched against Iran. His camaraderie with Saddam reflected American strategy at the time, but it also showed Rumsfeld’s liking for people with power and his dismissiveness towards those without it.

It was Iraq that turned out to be his nemesis. He promoted his public image as the man who did not blench when al-Qaeda flew a plane into the Pentagon on 9/11. He had personally rushed to succour survivors, though witnesses later said that stories of his heroism were exaggerated. By that evening he was giving a press conference from a bunker in the Pentagon demonstrating that, though President George W Bush might have been evacuated to safety, his defence secretary was standing tall.

Within hours of the al-Qaeda attack Rumsfeld was looking to use it as justification for a war against Iraq. He sent a note to General Richard Myers, vice chairman of the joint chiefs of staff, looking for “best info fast … judge whether good enough [to] hit SH [Saddam Hussein] @same time – not only UBL [Usama bin Laden]”. This detail – along with much else in this piece – is derived from Rumsfeld: His Rise, Fall and Catastrophic Legacy by Andrew Cockburn.

Rumsfeld sought in his memoirs to evade responsibility for launching the Iraq war, claiming that President Bush had never asked him if he was in favour of it. The excuse is absurd since the defence secretary had constant one-on-one meetings with Bush who might well assume that the man in charge of gathering America’s armies for the invasion was in favour of doing so.

Rumsfeld enjoyed flying around the world in his giant C-17 transport plane, addressing assemblies of US troops, but he was essentially a palace politician. Not only did he have access to the Oval Office himself, but he fought determined campaigns to exclude other top officials from meetings with the president. He was even upset when Jerry Bremer, the newly-appointed US viceroy in Iraq, had a private lunch with Bush in May 2003.

Rumsfeld never had much understanding of Iraq or Afghanistan and probably did not think that he had any need to do so because the military might of the US appeared overwhelming. He reacted furiously when the chair of the joint chiefs of staff, General Eric Shinseki, told a Senate hearing that several hundred thousand troops might be needed as an occupation force after the invasion.

Rumsfeld’s pretence that he did not favour the Iraq war is easily disproved, but a better line of defence from his point of view was that almost no members of America’s political-military elite were opposed to the war at the time. Critics counter this by saying that military officers whose promotion was in the hands of Rumsfeld were unlikely to express scepticism about his plans.

Rumsfeld produced a much quoted but fallacious explanation which was used to explain why the US was so often caught by surprise by disastrous events in Iraq. He said that some facts were known and others unknown facts, “but there are also unknown unknowns—the ones we don’t know we don’t know”.

Rumsfeld said this in 2002 in relation to the shortage of evidence for the presence of Weapons of Mass Destruction in Iraq and it briefly won him a reputation for intellectual brilliance. But it masked the damning fact that there were “known knowns” about Iraq that were good reasons for believing that regime change would lead to a prolonged military and political crisis.

I remember a leader of the Iraqi opposition, who was very keen to overthrow Saddam, saying to me a few more months before the invasion that “I just hope that the Americans do not realise what they are about to do is not in their interests.”

Patrick Cockburn is the author of War in the Age of Trump (Verso).