Syrian Democratic Council (MSD) Co-President İlham Ehmed explains in a February 21, 2016 interview that discussion is growing in Syria of forming a federal system in which Kurds in Federal Northern Syria would exercise political autonomy in the system they have been building. Ehmed spoke to ANF on the latest military developments in Rojava, Turkey’s attacks on Rojava and the status of the Geneva-3 ceasefire talks for Syria. ANF herewith publishes the second part of an interview; part one is here. The interview was broadcast on YouTube.


The failed Geneva-3 talks are expected re-begin on 25 February but the current developments on the ground may result in another suspension of the talks. What do you think in this regard?

We don’t believe that talks can be held under these circumstances. There may be no Geneva-3 at all. The situation of the opposition is different now than what it was before the Geneva meeting. They had been present in and around Aleppo before, but lost it, too, now. If the Damascus regime takes the entire control of Aleppo, it might also refuse negotiations because there will be no opposition.

What about the forces in Rojava?

In the current state of affairs, Kurds and other forces in Rojava are determining how the Syrian system should be through the military achievements and the policy they put forward where they are present. It is now being discussed about a federal system in Syria in which Kurds in Federal Northern Syria will sustain an autonomous organisation and the system they have been building.

Do you mean the existing system in Syria will turn into a federal structure and a decision on this has already been made?

I do not want to broach this matter in detail for now. What is essential is the fight waged in Rojava and it is inevitable to achieve the democratization of Syria in line with this struggle.

Observations made during the discussions of structures that include international powers are for the formation of 3 federal regions in Syria. This is what is wanted by the peoples of Syria, and the states, parties and groups that seek a political solution in Syria. America and Russia are also of the same opinion.

Has this decision been made already and how will the formation of 3 federal regions be recognized?

As I’ve just said, I do not want to detail this issue for now. Yet, I can say that it is this idea that will be discussed from now on; i.e. formation of a Federal Syria to be constituted by Northern Syria, Southern Syria and Central Syria. Every one of these federal regions will preserve its own distinctness of identities and ethnic diversities. Each federal region will have its own parliament. This is all I can say for now.

What about the attitude of the regime and opposition towards the federal system intended to be formed?

In comparison to the opposition, the regime is much more moderate on this subject. Those seeking a political solution in Syria believe that the Syrian crisis can be resolved through this system.

If it happens as you say, Geneva-3 will be rendered meaningless. In this case, will the case end up in a Syria sought by Kurds since the very beginning?

I do not want to say anything else on this. We will wait and see.

As a last thing, I would like to ask you what will happen with the Syrian regime, and if it will continue with Assad in such a case.

An election to involve the 3 federal regions could be held in order to choose whom the people want.

In line with the military initiatives of the Syrian Democratic Forces, will it take time to unify the Canton of Efrîn with the other cantons?

It requires some time to unify this line. The military operations are aimed at not only unifying the cantons but also eliminating the threat of ISIS in these regions. ISIS is a major threat on this line, and not only for Kurds but also for Arabs. This threat needs to be removed.

Despite Turkey’s growing reaction, does the U.S. also want the unification of this line?

The U.S. and Russia know it is ISIS that hinders the unification of the cantons and that its elimination will enable the achievement of this objective.

Britain said on Tuesday it had seen disturbing evidence that Syrian Kurds were coordinating with the Syrian government of President Bashar al-Assad and the Russian air force.

“What we have seen over the last weeks is very disturbing evidence of coordination between Syrian Kurdish forces, the Syrian regime and the Russian air force which are making us distinctly uneasy about the Kurds’ role in all of this,” Foreign Secretary Philip Hammond told the British Parliament.
[end]

The Syrian government said on Tuesday it accepted a halt to “combat operations” that does not include the Islamic State group, the al Qaeda-linked Nusra Front, or groups connected to it, in line with a US-Russian plan. It said it would coordinate with Russia to decide which groups and areas would be included in the “cessation of hostilities” plan which is due to take effect on Saturday according to the US-Russian plan…

In a statement, the government stressed the importance of sealing the borders and halting foreign support to armed groups and “preventing these organisations from strengthening their capabilities or changing their positions, in order to avoid what may lead to wrecking this agreement” … 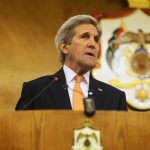