Interview: How did chaos and war arrive on Russia’s border with Ukraine?

On December 10, 2015, the video channel of the Russian web publication Svobodnaya Pressa (Free Press) broadcast an informative interview-exchange between Igor Korotchenko and Rostislav Ischenko on the situation in Ukraine, the conflict of its governing regime with Russia, and how events in the Middle East are reshaping politics in the world. The interview has been sub-titled in English by the website The Saker and broadcast on YouTube here on January 30, 2016. 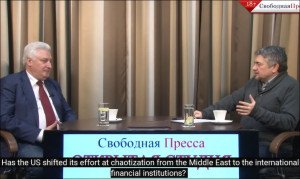 Rostislav Ischenko is a Ukrainian and Russian political scientist and a columnist for Russia Today. He moved to Russia from Ukraine in March 2014. Igor Korotchenko is the editor-in-chief of the Russian magazine ‘National Defense‘ . He is a journalist and military expert, a retired colonel from the Russian army and director of the Centre for Analysis of the Global Arms Trade.

The original broadcast by the video channel of Russian media Svobodnaya Pressa is here.

The main topic covered in the 80-minute exchange is the geopolitical war for control of Ukraine and the chaos and destruction engendered by the Western and NATO intervention there. Many other issues are addressed, as well, including the war in Syria, the role of the IMF and NATO in today’s workd, and the situation in Turkey.