International statement in support of memorial event in Odessa, Ukraine on May 2, 2016

Statement in support of the May 2 memorial to be held in Odessa, Ukraine, and for a United Nations investigation into the tragic events of May 2, 2014

On May 2, 2016, a memorial will be held in Odessa, Ukraine, to honor the memory of scores of pro-democracy activists who were brutally murdered on that date in Odessa two years ago. 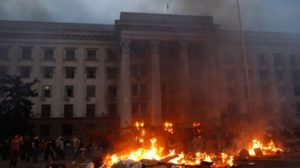 There is no reason for the Odessa City authorities to forbid a peaceful memorial, but right-wing radicals – some of whom are believed to have been involved in the events of 2014 – have declared that they will not allow it to proceed.

The tragedy of Odessa and the continuing danger of right-wing violence in that beautiful city is of growing concern to decent-minded people around the world. Therefore, we the undersigned representatives of human rights organizations in the United States and other countries hereby call on the governments of Odessa, Ukraine and the United States to ensure that the civic rights of those attending the May 2 memorial in Odessa will be respected, including the delegations of international monitors who will be present on that day.

We further respectfully appeal to the United Nations Human Rights Committee to initiate an international investigation into the events of May 2, 2014, as requested by family members, friends and supporters of those who died on that day.

According to widely published reports, protesters opposed to the February 2014 coup that overthrew Ukrainian President Viktor Yanukovych had set up a symbolic tent city in Odessa’s Kulikovo Square, in front of the five-story House of Trade Unions. On May 2, right-wing soccer fans, whipped up by pro-coup activists, attacked and burned the tent city, driving the much smaller group of protesters into the union building. The mob then set the building on fire. At least 46 people died from burns, smoke inhalation, gunfire and beatings. Many more were wounded. It was the worst case of violence in Odessa in many decades.

Ever since the massacre, representatives of the families of those who died have held weekly vigils to honor the memory of their loved ones. Many of these memorials have been harassed by pro-coup groups. As recently as April 10, a large gathering of people celebrating the liberation of Odessa from Nazi occupation was attacked by right-wing thugs. These same forces are now are threatening to physically prevent the second May 2 anniversary memorial from taking place.

At a formal meeting of the U.N. Human Rights Committee held on March 21 in Geneva, family members and their supporters asked the committee to initiate a long-overdue impartial investigation into the events of May 2, 2014. For their part, the pro-coup forces are expressing their opposition to such an investigation. This contradiction alone should make clear which side wants the truth to be revealed and which side wants it to remain hidden.

Again, we call on the United Nations to initiate the requested investigation. And we call on the governments of Odessa, Ukraine and the United States to ensure that the civic rights of those attending the May 2 memorial in Odessa are respected.

This statement was initiated by the United National Antiwar Coalition, a broad coalition of peace and justice organizations in the United States. UNAC encourages the circulation of this petition among human rights organizations all over the world. Please send all new endorsements to:
UNAC, PO Box 123, Delmar, NY 12054 USA
Email: [email protected]
Website: www.unacpeace.org
Click here to sign this petition.

Nicolas J.S. Davies – Author, “Blood On Our Hands: the American Invasion and Destruction of Iraq”

Bob Kinsey – Colorado Coalition for the Prevention of Nuclear War *

Roza Husseini – Student of PACE at University of Winnipeg, Manitoba

Aaron Tovish – “Cities are not targets!” Project of Mayors for Peace

* Organization listed for Identification purposes only