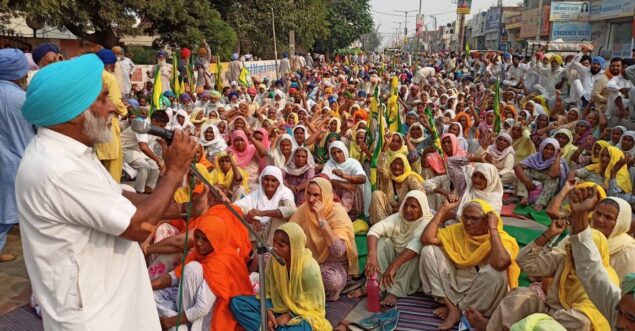 The Government of India passed several proposed laws regarding agricultural reforms in early June last year and the legislation was implemented in September. The farmers’ movement is continuing to make it clear that these laws are anti-farmer, anti agricultural labourers, anti poor people and also anti those living in towns and cities.

This article, written exclusively for the New Cold War website, is an analysis of the farmers’ movement against these laws.

The Government of India passed several proposed laws regarding agricultural reforms on June 5, 2020 and the legislation was implemented by the Parliament of India with no voting in Rajya Sabha, on September 22.

Many questions are continuing to be raised about these laws by leaders of farmers’ organisations, pro-people intellectuals and others. Questions are also being asked about the legality of these laws as agricultural production comes under the preview of the State governments, according to the State list of Indian Constitution. The farmers’ movement is making it clear that these Acts are anti-farmer, anti agricultural labourers, anti poor people and also anti those living in towns and cities. This is an analysis of the farmers’ movement against these laws.

Immediately after the passing of the three Ordinances on June 5, 2020, the leaders of farmers’ organisations and pro-people intellectuals initiated some dialogue/conversation regarding the devastating effects of these Ordinances on the farmers and the people. Slowly, various farmers’ organisations organised meetings for farmers to make them aware of the anti-farmer provisions of the laws. Some protests were held during July 2020 and on July 20, farmers burnt effigies of BJP-SAD in a large number of villages. Then on July 27, there was an impressive Tractor March at the call of farmers’ organisations and a memorandum was submitted to the relevant Members of Parliament for the areas.

A Famers’ Tractor March was also held at Bathinda and a memorandum was handed to Harsimrat Kaur Badal, who was minister at that time. In this way the tractor has emerged as a symbol of protest by farmers against the three “black agricultural Ordinances”. Following this, tractor marches were also held by some political parties, in Punjab, except for the BJP. As the campaign advanced, the participation of youth and women has gradually increased. In the first week of August, on the call of the  farmers’ organisations, a memorandum was submitted to the Deputy Commissions/Collectors. By now, there was a campaign at village level against these three laws.

The month of August also saw some organisations banning the entry of the BJP and Shimani Akal Dal leaders in the villages of Punjab. Then the organisations called for a ‘Jail Bharo’ on September 7-10, and the submission of a memorandum to the Prime Minister through government officials. By this time, farmers had become aware of this anti-farmer legislation and they started to attend rallies and dharnas in large numbers. The Government of Punjab started filing criminal cases against farmers for violating Section 144 of Criminal Procedure Code and guidelines of Covid-19. By this time protests were started in Haryana.

By the end of August there were reports  that farmers are protesting almost in 20 States. Strong protests  were held in Pipli and Karnal in the State of Haryana in the second week of September where the police lathi charged the protesting farmers. Punjab farmers protested against this lathi charge on September 11. Under pressure of increasing anger and struggle of farmers on September 16, the Chief Minister of Punjab announced to withdraw all FIRs filed against protesting farmers.

Farmers’ Organisations of Punjab called for Punjab Bandh on September 25 and to block roads and rails. But the Modi government presented the three farmers related ordinances as Bills in the Indian Parliament on September 14 and on the same day all the 31 Farmers’ Organisations called for ‘Lalkar Rallies’, which were very successful at Patiala, Phagwara, Barnala, Amritsar and Moga. And in these rallies farmers called upon the Shiromani Akali Dal (SAD) to clarify its stand. Then SAD came out of the Union Council of Ministers and started speaking against these laws and Harsimrat Kaur Badal resigned from the Union Cabinet on September 17. On September 27 the President of India signed these Bills passed by the  Parliament (without voting in the Rajya Sabha). On September 27 SAD came out of NDA after 27 years of alliance with BJP.

During this struggle, for the first time the Farmers’ Organisations were approached by the Union government on October 7, and organisations were called to Delhi to provide information regarding agricultural reforms/Acts. All the 31 organisations of farmers rejected this invitation. After that on October 13, Farmers’ Organisations went to Delhi for talks but there was only Joint Secretary, Ministry of Agriculture, Government of India to talk to farmers so the farmers boycotted this meeting as there was no government minister present. Instead of government ministers talking to the farmers’ organisations, Modi’s government formed a group of eight Union Ministers to hold virtual conferences in Punjab, to provide information to farmers about the laws.

During all this ‘Rail Roko’ protest was continue but then on October 21, 2020 the Central government itself stopped the trains up to November 23 and put the condition that till the passenger trains will not be allowed no train will run. After that AIKSCC call for ‘Chakka Jam’ (Block the roads) on November 5, and ‘Delhi Chalo’ on November, 26-27, 2020. By this time and through this call this movement started spreading all over India.

After this call by AIKSCC ( now called United Kisan Morcha) the Modi government held regular meetings with Farmers’ Organisations of Punjab on  November 13, in which Railway Minister Pyush Goyal and Minister of Agriculture & Farmers Welfare Narendra Singh Tomar and  Minister of State for Commerce and Industry Som Nath were present.

Then the farmers of Punjab started moving towards Delhi on November 24, 25 on the call of Farmers’ Organisations. But on November 26, thousands and thousands Punjab farmers broke the barricades at the borders of Haryana (at Sambhu, Khanori and Mandi Dabhwali) and moved towards Delhi. In this struggle to reach Delhi the farmers of Haryana helped in a big way the Punjab farmers. Then the farmers started Morcha (Blockade) at Singhu and Tikri borders from November 27, 2020 onwards.

The Farmers’ Organisations have failed all the schemes and ill wills of the Modi government With thousands and thousands tractors-trolleys, buses, cars etc. lakhs and lakhs farmers sit at the borders of Delhi and started three stages to address the farmers and other people to educate them regarding these Acts. Then artists, employees. workers, students, intellectuals and other sections of people started to come to Delhi in support of the farmers. Even the NRIs provide support to these struggling farmers. Large number ladies and children also fully participating  in these morchas against the Modi government. The Union government tried to confine these farmers at some stadiums/open spaces like Burari.

Even Home Minister of India, Amit Shah appealed to the farmers to come to open space Burari but the experienced leadership of farmers failed all these ill-intentioned acts by the Modi government. After this huge gathering is there at the borders of Delhi and farmers have made the trolleys their homes. They established these borders as newly inhibited villages/cities/towns. Lakhs and lakhs people are at the two borders of Singhu and Tikri. There are about 12,500 villages in Punjab and farmers from every village are at these borders of Delhi. From the beginning of December farmers from other States began to travel to Delhi.

Then, from December 1, the Modi government began regular meetings with the farmers organisations. These meeting took place on December 1, 3, 5 and 8. By December 8, with no sign of a result, the farmers’ organisation began to make their case more and more strongly at each consecutive meeting. At the December 8 meeting, the farmers’ organisations demanded a simple yes or no vote to reject the three anti-farmer laws. In the meantime thousands and thousands farmers with tractor-trolleys and other vehicles came to Delhi after breaking through the barricades at Uttra Kand, U.P., M.P., Maharastra, Rajasthan etc. They also blocked the national highways at Hazipur, Shajanpur and Palwal. By this time it had become a movement that united all Indian farmers.

(1) To discuss the process and modalities of repealing/rejecting all the three Union Agricultural Acts.

(2) To discuss the provisions of providing beneficial MSP to all farmers, as suggested by National Farmers Commission.

(3) By amending the Ordinance regarding, exempting farmers from “Commission for Air Quality Management in the National Capital Region and Adjoining Areas, 2020”.

(4) To make the necessary changes in the ‘Electricity Amendment Bill, 2020’ to safeguard the interests of farmers.

But the Modi government changed the date and time of this meeting. This meeting was held on December 30 at 14:00 in Vigyan Bhawan. The Union government agreed to accept the demands relating to Air Quality and the Electricity Bill. But still nothing has come in writing from the government. But let us see what will be provided in writing. As the main demands to repeal the three Acts and to make MSP a legal right along with assured purchase have not been accepted by the Modi government and the meeting held on Jan 4, 2021 between the farmers’ organisations and the Modi government was held without any result with the next meeting taking place on January 8, 2021.

A further meeting was held on January 15, but without result. A subsequent meeting was held on January 19. In the meantime people burnt copies of the law in the Lohri fire on Jan 13 and 18, which is celebrated as  Mahila Kisan Diwas at the call of the KSM.  For these talks Hannan Mollah, nation General Secretary of All India Kisan Sabha (AIKS) and Major Singh Punawal, General Secretary of AIKS Punjab are members of the Committee held a meeting with the government. Lakhs and lakhs farmers, workers, women, children, old people were among those on the roads in the extreme cold. At the time of writing, more that 103 persons have sacrificed their lives in this struggle. Everyday there is sacrifice by farmers and people but the Modi government is not sensitive to the farmers’ demands. Farmers have already scheduled protest actions up to the end of January.

One thing is very clear, this time it is a totally different type of movement by the farmers. Since Indian Independence, this is the first movement in which all farmers’ organisations have participated (more than 500 at national level and 32 at Punjab level) and all sections, apart from corporates, are part of this people’s movement. In terms of political parties, all except the BJP and NDA allies are in support. This has now become an international movement. Farmers will not turn back without the repeal of these three anti farmer laws. If necessary, they will assemble at the borders of Delhi for a further six months or longer.

Let us support this famers’ movement, which has now become a people’s movement, by every means possible. Let us also see how long we have wait for this movement to achieve a decisive victory. 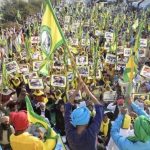 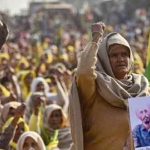 Farmers’ Protest in India – Price of Failure Will Be immenseIndia