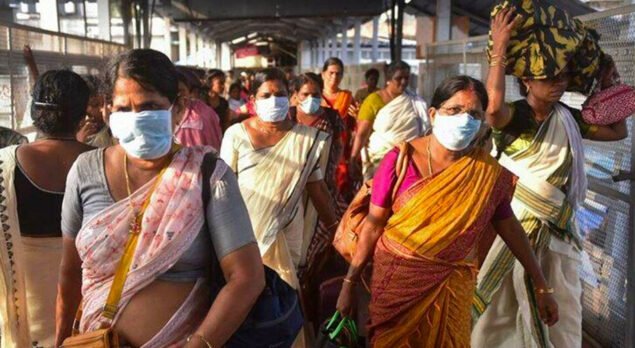 At the height of India’s COVID-19 crisis, some Chinese netizens saw retribution for the Modi government’s aggressive posture towards China. In this essay, Chinese blogger 红色卫士 (Red Defender) instead insists on internationalist solidarity and a distinction between the right-wing Modi government and the working class and low-caste peoples who suffer the most under his regime.

Editors’ note: This essay was originally published in Utopia (乌有之乡) on May 5th, 2021, as India’s daily reported new COVID-19 cases surpassed 400,000. As heartbreaking images of families searching for oxygen tanks, overflowing hospitals, and makeshift funerary pyres circulated around the world, Chinese officials proclaimed support for India’s pandemic fight and pledged aid—eventually sending the largest-ever consignment of oxygen concentrators to New Delhi. Yet an undercurrent of schadenfreude emerged amongst some Chinese netizens, who saw in India’s crisis retribution for the Modi government’s aggressive stance towards China as seen in 2020 border clashes in Ladakh and India’s role in the U.S.-led anti-China “Quad” alliance.

In this essay,  红色卫士 (Red Defender) takes this narrow nationalism to task, calling for criticism of the right-wing Modi regime alongside solidarity with India’s working class and low-caste peoples who suffer the most under their reactionary government. Critiquing national chauvinism as a means to divide internationalist struggle and distract from domestic contradictions, the author insists: there is no enmity between the working class people of each country.

There is no enmity between the working class people of each country. Rather than being duped by the bourgeoisie into stirring hostilities under the banner of “patriotism,” we should instead unite to mutually resist our capitalist oppressors.

In recent days, the pandemic in India has rapidly deteriorated. Without a doubt, it is India’s working class people who suffer the most.

We have always advocated treating our neighbors with kindness, as indicated by the words “世界人民大团结万岁” (“Long Live the Great Unity of the World’s Peoples”) inscribed on the banner atop the Tiananmen gate tower.

So it is perplexing that some of our nation’s pundits took the opportunity to jeer at India in order to flaunt their own superiority.

For example, one Weibo account posted a picture of a rocket launching in China juxtaposed with a picture of deceased COVID-19 victims being burned in India, with the caption “China lighting flames vs. India lighting flames.” The message is as clear as day: China is strong and resilient, whereas India is in hot water.

This post was also endorsed by Fudan University’s famous lecturer Shen Yi, who describes India as “foul” and “bastardly.” Another post comparing “China’s Houshenshan vs. India’s Huoshenshan” also conveys a similar message (Huoshenshan is the emergency capacity hospital rapidly built in Wuhan during the height of China’s pandemic). 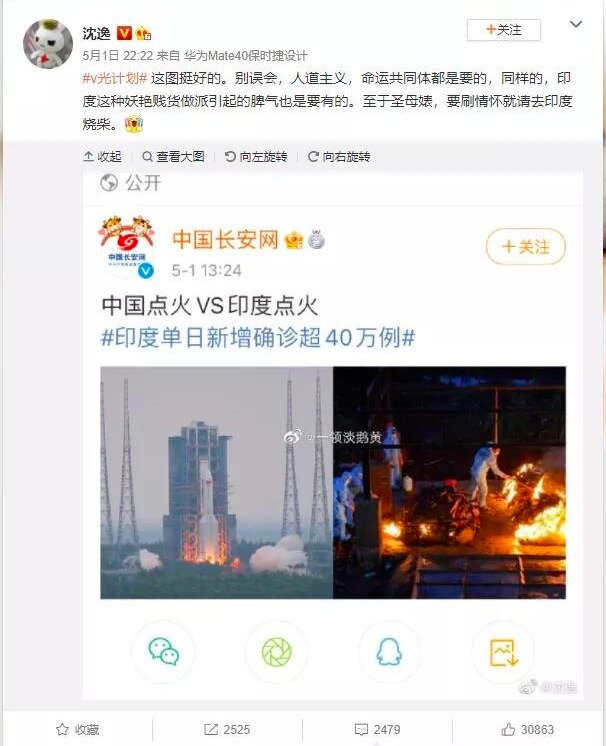 It is without a doubt that China is strong, but is it really appropriate to draw comparison with the catastrophe that the Indian people are facing? Wouldn’t that be rubbing salt in their wounds, treating their suffering as mere spectacle for us?

We should treat others as we want to be treated; what would the Indian people think when they see their suffering being exploited to fulfill our own egos? For a major nation that proclaims itself as “a country of etiquette,” wouldn’t it be out of line to affirm China’s strength and prosperity this way?

If we uphold this attitude, should the banner that reads “Long Live the Great Unity of the World’s Peoples” even continue to be on display?

Even [Chinese journalist and editor of the Global Times] Hu Xijin felt the need to take a stand. While he expressed indifference towards the opinions of the average netizen, he called for official accounts to maintain a humanitarian attitude and not hurl tasteless insults towards others.

But neither official accounts nor the online masses have any justification for resenting the Indian people. As Mr. Hu has said, if government officials should regulate their conduct and express sympathy, what reason is there for us ordinary people to not do the same?

I understand, some of us might be bitter towards India because of the border hostilities it has provoked against us, but we must assign blame correctly. It is the reactionary government that caused the border conflicts; the ordinary people of India not only have nothing to do with them, but they actively oppose the reactionary government. Did we not witness guerilla forces from the Communist Party of India carrying out armed struggles in the countryside?

The Communist Party of India has stated that, with the support of imperialist powers, Modi’s pro-Hindu fascist regime is brutally oppressing the working class Indian people, curtailing the 44 labor laws down to four to appease the interests of imperialist finance capital.

Modi has always opposed the working masses under the pretense of “economic development.” India used to have fairer labor protections, but Modi tore them to shreds. Without a doubt, this was all done in the service of domestic and foreign capitalists.

Although India is said to be “the world’s largest democratic nation,” its state apparatus is repressing progressive democratic movements and imprisoning those who dare to resist. To defend ourselves against imperialism and the reactionary regime, the working class people must start a revolution and mobilize the “criticism of weapons.”

This criticism and struggle against India’s reactionary government is for the sake of India’s proletariat and the liberation of the people.

But the tone of those like Shen Yi is antagonistic towards India as a whole, stoking the flames of animosity. The Modi regime often stirs conflict with neighboring nations, especially against China, to create an external distraction from internal strife. This of course is loathsome.

But even though the Indian government as well as Western media and officials often slanders China, as a major socialist power, do we have to use the same underhanded tactics?

What we should do is to learn from Chairman Mao and support the Indian people’s resistance, not deride them for the sake of our own pride. Only then can we win the respect of others and expand our united front to deliver a crushing blow to reactionary imperialist powers.

If we ridicule the plight of other nation’s people, wouldn’t that play right into the hands of hostile forces which stoke nationalism in order to distract from domestic contradictions?

We the Chinese people are smarter than this. We must not fall into the trap set up by overseas powers. They want to sow discord by stroking ethnic and national tensions so that the spoils will fall to them.

We must not forget the teachings of Chairman Mao to separate imperialism from the people living in imperialist nations. He always abided by this principle when dealing with nations such as the United States and Japan. This is a method rooted in dialectic and class analysis.

Indeed, even if the Modi regime’s border conflict against China leads to the successful occupation of Chinese territories, is that going to help the inhabitants of slum areas afford housing, healthcare, and an education?

If these contradictions are transferred onto foreign countries, would that make lower castes and Brahmans see each other on equal footing? What do the ordinary people stand to gain from war, other than serving as cannon fodder? Who else other than politicians and capitalists profit from it?

What enmity is there between China and the working class people around the world? Last year, when the pandemic in China was at its peak, the people of India supported our pandemic prevention efforts and prayed for us. 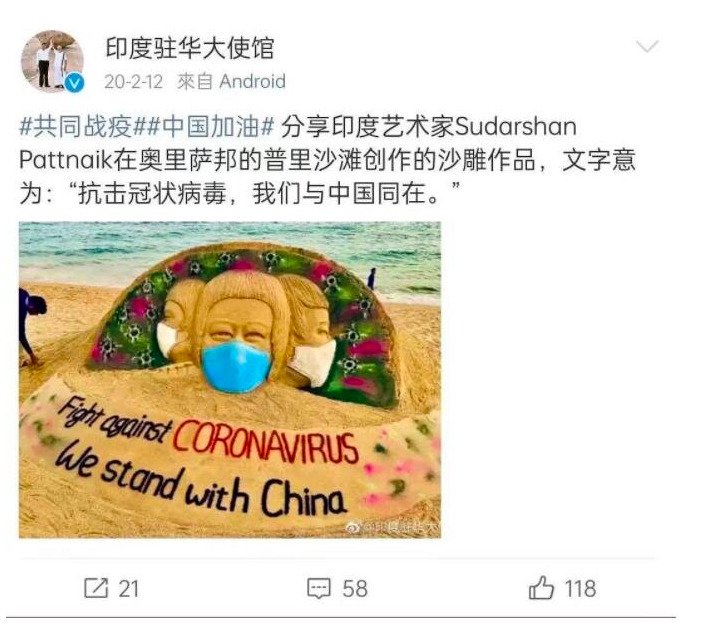 Throughout history, China has always despised the act of paying back kindness with scorn; those who antagonize and deride the people of India are bringing shame to the nation.

Japanese imperialism burned and pillaged China during the War of Japanese Aggression, but there were Japanese people with a conscience who were sympathetic to China and opposed the emperor. Many Japanese Communists even joined China’s 八路军 (Eighth Route Army) to oppose their nation of birth. Field marshal 聂荣臻 (Nie Rongzhen) adopted two Japanese orphans, and this friendship continued after the war.

These examples fully demonstrate that there is no enmity between the oppressed working class people of the world, so rather than being duped by the bourgeoisie into stirring hostilities under the banner of “patriotism,” we should instead unite to mutually resist our capitalist oppressors.

Of course we should express our love for our country, but it is not the bourgeois love of country which we express.

Chairman Mao insisted on internationalism, inscribing the motto “Long Live the Great Unity of the World’s Peoples” on the Tiananmen gate tower. In all parts of the world, he supported popular struggle and opposed the reactionary states. This is why he won the respect of the masses and became a mentor for revolutionaries around the world.

But now, there are those who seemingly wanted to tear down the legacy he had built, are they not?

After the founding of New China, U.S. imperialist forces invaded China’s neighbors in an attempt to “contain” the spread of socialism. Chairman Mao gave immense sympathy and support to the people of those nations. One such example is him sending military reinforcements to Korea and Vietnam, making massive sacrifices to support their struggle against the United States.

Professor Shen Yi had said that those who sympathized with India are “social justice warriors,” who should demonstrate their sympathy by helping burn firewood there. If that’s the case, then Chairman Mao would be considered a dupe for sending aid towards neighboring nations. Whoever was sympathetic towards Korea or Vietnam at the time should be sent there to be firebombed by U.S. imperialism while the rest can live idly in China. This is precisely a display of opportunism towards international issues.

Proletarian parties and communists, on the other hand, are adamant internationalists. In 1848, the first page on The Communist Manifesto declared: “Proletarians of all countries, unite!” This has been the tenet of socialism to this day.

Atop the Tiananmen gate tower lay the words “Long Live the Great Unity of the World’s Peoples.” Meanwhile, some individuals gained a substantial following advocating for nationalism and agitating ethnic rivalries.

Even our opinion leader Old Hu has to be extremely careful when dealing with these people, and still he was lambasted viciously. As someone who is very experienced in public discourse, this was the issue that overwhelmed him.

Is that not deserving of our caution?

Chairman Mao teaches us: “Who are our enemies? Who are our friends? This is a question of the first importance for the revolution.” We must take this lesson to heart. 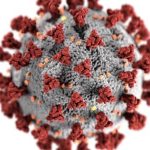 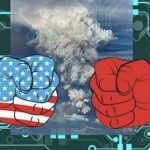