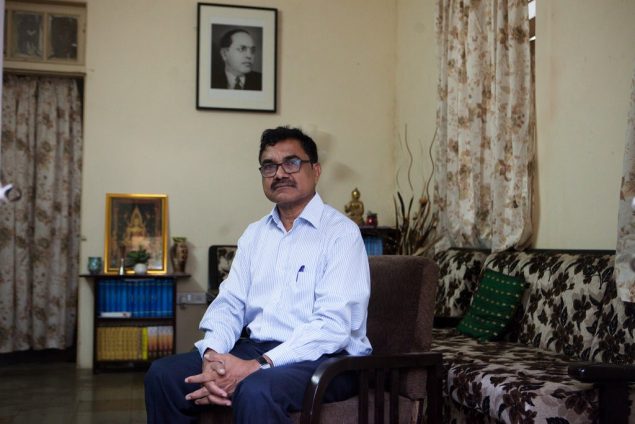 Prof. Anand Teltumbde, a well-known champion of India’s lower castes, has been accused of plotting against the government. “I cannot describe the humiliation,” he said.
Credit: Prarthna Singh for The New York Times

Human rights activists say that the allegations against Prof. Anand Teltumbde and his likely arrest are part of a wider crackdown on intellectuals who criticize Prime Minister Narendra Modi’s record, especially his government’s treatment of religious minorities and lower castes. They also say that, as a well-known champion of Dalits (formerly known as untouchables), a prolific writer with a wide audience, and an unrelenting critic of Modi, Teltumbde was an obvious target. Around the world Prof. Anand Teltumbde’s supporters are signing petitions and protesting against the action of the Indian police.

Returning from a lecture in southern India a few weeks ago, Prof. Anand Teltumbde was booking a cab outside Mumbai’s airport after midnight when security officers approached him in the dark and took him away.

Mr. Teltumbde, a prominent scholar and writer on Indian social issues, was locked in an iron-grilled cell in the nearby city of Pune. For eight hours, he sat behind bars on a dirty mat until a court intervened, ruling that the arrest was illegal.

But it was not entirely a surprise. Last year, the police in Maharashtra, one of India’s largest states, said they had uncovered a vast conspiracy to topple the Indian government that involved Mr. Teltumbde and other well-known writers, academics and lawyers.

Officers raided more than a dozen of their homes, confiscating hard drives and documents. Citing a broad antiterrorism law, the police have put nine of them in jail, accusing them of helping Maoist insurgents, trying to procure grenade launchers, inciting a riot and plotting to assassinate Prime Minister Narendra Modi.

“I cannot describe the humiliation,” Mr. Teltumbde, 67, who denies the accusations, said in an interview.

Human rights activists say the allegations are part of a crackdown on intellectuals who criticize Mr. Modi’s record, especially his government’s treatment of religious minorities and lower castes.

Mr. Teltumbde was an obvious target, activists say. He is a well-known champion of Dalits (the group formerly known as untouchables), a prolific writer with a wide audience, and an unrelenting critic of Mr. Modi.

At a literary festival in 2017, Mr. Teltumbde called the prime minister a “narcissist par excellence” who could prove to be more dangerous than Hitler. He said Mr. Modi’s politics, which are rooted in Hindu nationalism, amounted to “fascism plus something.”

“I cannot describe the humiliation,” Mr. Teltumbde, 67, who denies the accusations, said in an interview.

Human rights activists say the allegations are part of a crackdown on intellectuals who criticize Mr. Modi’s record, especially his government’s treatment of religious minorities and lower castes.

Mr. Teltumbde was an obvious target, activists say. He is a well-known champion of Dalits (the group formerly known as untouchables), a prolific writer with a wide audience, and an unrelenting critic of Mr. Modi.

At a literary festival in 2017, Mr. Teltumbde called the prime minister a “narcissist par excellence” who could prove to be more dangerous than Hitler. He said Mr. Modi’s politics, which are rooted in Hindu nationalism, amounted to “fascism plus something.”

In the same speech, Mr. Teltumbde pressed an even more sensitive button by saying Mr. Modi had “enacted the carnage of Muslims in 2002,” referring to religious riots that killed more than 1,000 people in Gujarat when Mr. Modi was the chief minister of that state. Mr. Modi has never been charged with a crime in connection with the violence. 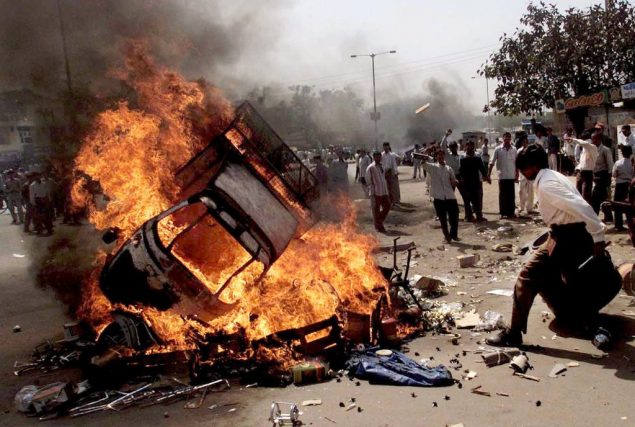 Mr. Teltumbde has accused Prime Minister Narendra Modi of complicity in the killings of Muslims during riots in 2002 in the state of Gujarat, where Mr. Modi was then the chief minister.
Credit: Manish Swarup/Associated Press

The case against Mr. Teltumbde has alarmed scholars across the world. Hundreds of academics, including Noam Chomsky and Cornel West, have signed petitions calling for the United Nations to interveneand for the police’s “fabricated charges” to be withdrawn.

“I enthusiastically signed this,’’ Mr. West said in an interview last week. “Anand is my brother and comrade, and I wanted to show my support for him as well as the Dalit freedom struggle.’’

Sangeeta Kamat, a public policy professor at the University of Massachusetts, Amherst, who also signed a petition supporting Mr. Teltumbde, called him the best-known of the Indian academics under official scrutiny. She said he had made a “compelling case for how and why the present regime is anti-democratic, anti-Dalit and anti-poor.”

As India’s national elections draw closer — they are expected in April and May — intellectuals fear that pressure on outspoken dissidents among them will only intensify.

“The idea is to crush such people and others will become silent on their own,” said Chandra Bhan Prasad, a journalist and commentator.

A. Bharat Bhushan Babu, a spokesman for the federal Ministry of Home Affairs, said the investigation was being handled by the Pune police, who he said had presented substantial evidence that the accused had traded arms and targeted “important V.I.P.s” in the government.

Police officials in Pune did not respond to numerous requests for comment. Pune is one of the largest cities in Maharashtra, which is controlled by some of Mr. Modi’s closest and most powerful political allies.

Param Bir Singh, the director general of the Maharashtra police, said at a news conference last year that the intellectuals were conspiring to “create chaos and overthrow the established government.”

If the Indian authorities are trying to quash dissent, it would hardly be the first time. Indira Gandhi, to cite one example, cut deeply into civil liberties when she was prime minister. During a 21-month period in the 1970s, she censored the press and jailed opponents.

But today is worse, in Ms. Kamat’s opinion. “The law, the judiciary, the bureaucracy, the police are being weaponized,” she said.

The police’s case against Mr. Teltumbde and the other intellectuals hinges on violence that erupted on Jan. 1, 2018, after thousands of Dalits gathered to commemorate the 200th anniversary of the Battle of Koregaon, a small town near Pune. 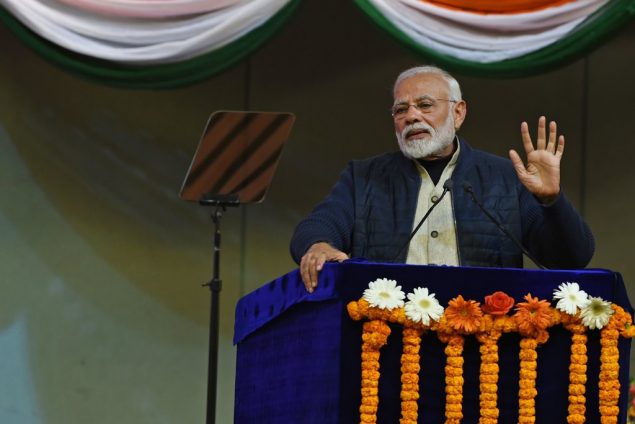 In 1818, members of the Mahar community, who would have been considered Dalits, joined British colonizers there to fight off other Indians who were trying to get rid of the British. As the story goes, a small group of British soldiers, aided by a spirited Dalit contingent, stopped thousands of high-caste Peshwas from taking a British base in Pune.

The battle has left a complicated legacy. Some higher-caste Hindus object to its commemoration, saying Dalits should be ashamed to have sided with the British. But many Dalits see the battle as a victory over an oppressive class.

The commemoration last year quickly turned into a brawl, with upper-caste Hindus fighting on one side, Dalits on the other. At least one person was killed.

Police officials in Pune initially turned their attention to hard-line Hindu leaders. Then they changed tack, accusing Mr. Teltumbde and the other academics and writers of instigating the unrest.

Five of them have already been charged. At least seven others, including Mr. Teltumbde, have been named by the police in court submissions as having colluded in the plot. They are waiting to see if the authorities file formal charges later this month.

The police say the scholars are part of a Maoist conspiracy. They say they found several incriminating letters during the raids, including one addressed to “Comrade Anand,” identified by investigators as Mr. Teltumbde. The officials said the letter urged him to “give more traction to domestic chaos.”

Some security analysts believe the letters were falsified — in some cases, laughably.

Ajai Sahni, executive director of the Institute for Conflict Management in New Delhi, said they resembled “the work of a satirist or comedian.” They bear little resemblance to how Maoist militants usually communicate and have “all the hallmarks of mischievous fabrication,” he wrote in an essay for the South Asia Intelligence Review.

Julio Ribeiro, a former police commissioner in Mumbai, said it was unlikely that all the evidence would have been fabricated. But he said the most extreme accusations against the scholars, including the supposed plot to assassinate Mr. Modi, sounded like a “political gimmick.”

Mr. Teltumbde says the only reason he is not in jail is that he happened not to be at his house when it was raided in August. Since then, he has appealed to the courts — successfully, so far — to prevent his arrest. On Thursday, investigators questioned him for six hours.

He said he had to step away from a teaching job in Goa that he loved because he could no longer concentrate. He is now staying at his in-laws’ house in Mumbai, waiting for the next shoe to drop.

“In my innocence, I thought that there was absolutely nothing and that it would boomerang on them,” Mr. Teltumbde said. “That’s what I was confident about, but all my hopes have shattered.”

Rally for Teltumbde and other activists held in Canada