India is confused; where does it go from here? 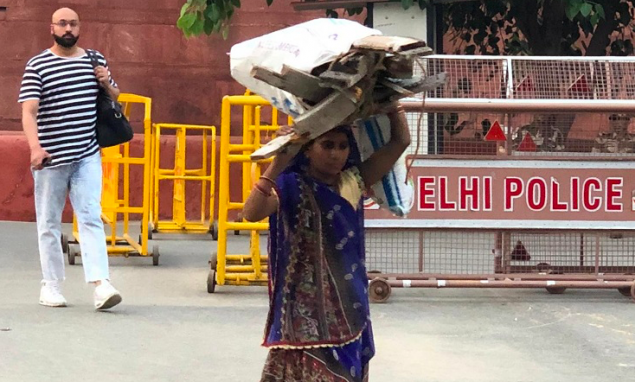 At J. Nehru University, most students know about China and Russia only from the BBC, Reuters and other Western media outlets. Even those individuals who claim they belong to the left are not immune; influenced mainly by the British propaganda.

It has been like this for years: usual confusion, all around India: tough nationalistic, even chauvinistic rhetoric, mixed with almost religious economic submission to the West, and often, to Western geo-political interests.

During the last few years, nationalism, as well as Hindu religious dogmatism have been gaining ground, while capitalism, often in its most vulgar and grotesque form, has been turned into a worshipped and bulletproof demagogy.

Gone are the days of Pandit Jawaharlal Nehru and Indira Gandhi. Now, there is no flirtation with socialism, anymore, and no attempt to create a country that would serve all of its citizens.

Like in Thailand, which is now the country with the most unequally distributed income on earth, Indian elites are thriving on their exceptionalism, on being separated from the poor majority by entire galaxies.

Here, Bentley and Jaguar showrooms rub shoulders with terrible, impenetrable slums. Expensive private hospitals are shamelessly seducing foreigners into “cheap” medical tourism, while the local poor are dying in pain and misery, often with no help at all.

For many years, I have been writing about this country, from Kerala and Tamil Nadu to the oppressed Northeast and Kashmir. I have encountered, and worked with, many local thinkers, opposition figures and artists.

Then, four years ago, after covering Kashmir, Assam and the deprived villages north of Delhi, something broke inside me, and I couldn’t stand what I saw here, anymore. I could not deal with the gang rapes, with people being tortured and forced to eat their own flesh. And I refused to be subjected to the most grotesque “security”measurements and bullying on earth.

“Democracy!”, people laughed at me, when I mentioned the word. “Yes, democracy, for them, for the rich. We the poor only stick pieces of paper into a box, take small bribes and alcohol from various political parties, before elections. We get beaten up if we do something the rulers and the rich consider wrong.”

I have had enough of the farce: in India, Indonesia, Thailand – wherever the brutal, nihilist regimes which have been reducing the majority of the population into beggars, have been clinging, almost unopposed, to power.

Then two months ago, the Student Association at Jawaharlal Nehru University, wrote me a letter, inviting me back to speak, this time about China and the conflict between the PRC and the United States.

The email exchange with the Students Union Leaders included a piece of information which I was actually aware of:

“Everybody here is occupied with JNU student union elections next week. It is one of the most important places of ideological resistance to the current Fascist government in India. “

Modi… Yes. They hate Modi at JNU. Many do. But then later, in Delhi, after accepting the invitation, in an Uber from my hotel to the university, I was told, bluntly:

“Your friends, including Arundhati Roy and a Kashmiri documentary film director Sanjay Kak, used to speak at this university, often. Now they cannot even show their faces here, or there would be a riot organized by the RSS.”

At that moment I knew that I am on my own. Ready to face the students at the school which could be still considered the best public university in India, but which was hostile to even the most luminous intellectuals this nation has recently produced.

I recalled how, four years ago, in a café in New Delhi, sitting at a table with Arundhati Roy and Sanjay Kak, I committed an indiscretion, exclaiming:

“But India has such great opposition figures!”

Arundhati looked at me, sarcastically, and uttered:

“Yes, and most of us are sitting, right now here, at this table.”

My encounter with the JNU students and researchers was colorful; from the beginning to the end. They wanted me to speak about the “Global South”, and about the conflict between the West and both China and Russia.

I did. But I also wanted to “take the pulse”, to understand, from their questions and statements, what they actually know, and what they would like to learn from exchanges like this.

For two full hours we faced each other, and these were not always pleasant moments.

I spoke about China and Russia as I knew them, experienced, and wrote about. They were shooting many questions at me, questions that were often shaped by the Western propaganda language, and by mass media jargon.

I stood my ground.

“Why did China do nothing to help Cuba?”

I patiently explained that China saved Cuba, after the Soviet Union decomposed under Gorbachev and Yeltsin. Sarcastic sounds followed.

“Fidel Castro quoted me, and wrote that I was correct,” I uttered. This restored order. There was not much to add.

There were questions about Hong Kong. Confrontational questions. Definitely not questions that are asked among comrades. I did not lose my temper. Patiently, I explained what I recently witnessed in Hong Kong: the confusion of the rioters backed by European and North American countries. Violence and hate; destruction.

At the end, one young man asked me, with a smile: “And what about Iranian imperialism?”

“Iranian imperialism?” I couldn’t understand. I still did not fully comprehend that this was different India that I knew in quite a recent past.

I recalled how I was approached: [JNU] is one of the most important places of ideological resistance to the current Fascist government in India.

One of the left-activists and research scholars at JNU who asked not to be identified, and who was present during my presentation, later wrote for this essay:

“On the extreme right-wing violence kind of things like lynching, riots, hate speech, Hindutva interpretation of history etc. – there is some resistance from a section of liberal elites. Or resistance on caste issues from people who care about these issues.

But on long term policies of Indian state – pro-US foreign policy, neoliberal economic policies, etc – there is hardly any understanding or resistance.

I even heard one ex-WTO guy in a seminar here – who was surprised to see the consensus among students on the ‘rule-based international trading system’ in contrast to fierce disagreements when he came a few years back.

There are few teachers who are exceptions – but in general a far-right shift (in economic and foreign policy) is unfortunately true.”

That is obviously and unfortunately what is happening. I witnessed it at JNU, I was told this by my friends, and I felt it on the street.

Binu Mathew, the legendary Editor of “Countercurrents” magazine, based in Kerala, explained:

“During the cold war India was one of the conscience keepers of the world. It took a moral stand on world issues. Jawaharlal Nehru was one of the founders of the Non Aligned Movement during the Cold War. It was a huge moral force during those maddening times. It has completely lost now. It was done by the very followers of Nehru’s Congress party. They made India a minion of the USA by signing a military strategic partnership in 2008. The Bharatiya Janata Party (BJP) which came to power after the Congress-led government, took it to another level. In 2016, the US designated India a “Major Defense Partner”. Now India is following the dictate from Washington… I think the USA is using India as a bulwark against the growing Chinese influence in the Indo-Pacific region.”

Narendra Modi used to be the Chief Minister of Gujarat, during those brutal massacres that I covered. The right-wing, Hindu nationalist, paramilitary volunteer organization, RSS, responsible for those massacres, is now a major force on the Indian political scene. Mr. Modi is held responsible for the pogroms. The academic view of the “events” is summarized by Martha Nussbaum, who said:

“There is by now a broad consensus that the Gujarat violence was a form of ethnic cleansing, that in many ways it was premeditated, and that it was carried out with the complicity of the state government and officers of the law.”

Mr. Modi is now Prime Minister of India. Under his rule, the misery of the poor (the majority of the nation) is deepening. The shameful cast system is still firmly in place.

Leaving India for Thailand, I watched the extremely long Hindi film, called “Guru”. Melodramatic, badly acted and directed, but it was still worth watching.

Nowhere else in the world, would such films be possible to make a film glorifying capitalist, thuggish cronyism and corruption, a feel-good film about an ambitious young man becoming the owner of an industrial empire. In India, no one laughs at such propaganda, turbo-capitalist monstrosities. Such films are actually admired. People are dreaming to be like the main character.

While right-wing publications were lying everywhere, I couldn’t find or purchase the relatively progressive weekly news magazine Frontline; in my hotel, at the airport or on board the airplane.

A few years ago, I wrote an essay: “India Is Where? On Two Chairs!” Now, it is clearly sitting on the lap of the West. It has found “its place”.

The Global South? BRICS? Just words; at least for now. A few great individuals, like Arundhati Roy, are still fighting, but they are locked out, even from the J. Nehru University.

It is painful to accept, but it is the reality.

Andre Vltchek is philosopher, novelist, filmmaker and investigative journalist. He’s a creator of Vltchek’s World in Word and Images, and a writer that penned a number of books, including China and Ecological Civilization. He writes especially for the online magazine “New Eastern Outlook.”