In violation of Minsk-2 agreement, Kyiv’s foreign minister says no special status for Donbas and no amnesty for self-defense forces

Kiev authorities are not considering the issues of a special status to Donbass or amnesty, Ukrainian Foreign Minister Pavel Klimkin told the country’s parliament on Wednesday. 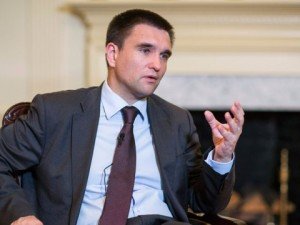 “They tried to impose on us an ‘amnesty list’ or a special status. There will be no such things,” Klimkin stressed.

The minister said the French initiative on immunity is discussed in the format of post-conflict settlement. “Amnesty is a judicial process rather than a political one, it may take place only when Ukrainian prosecutors and the court will be situated locally,” Klimkin said. “The Balkan states have the experience of such an amnesty.”

“We have the law on peculiarities of local self-government and the references to this law are included in the constitution. It is the only [law] that solves the situation with the special local self-rule in these regions,” he said.

The Donbass special status and amnesty are required under the Minsk-2 agreement signed on February 12 in the Belarusian capital, which also envisage the ceasefire, weaponry withdrawal, prisoner exchange, local election in Donbas and constitutional reform in Ukraine.

*  Rada chairman Groysman: “No special status to occupied territories, or amnesty to criminals”, report on the website of the Verkhovna Rada, Oct 7, 2015 (full text)

Commenting on the speech by Foreign Affairs Minister of Ukraine Pavlo Klimkin on results of the latest meeting [Oct 2] of the Normandy Four in Paris, Chairperson of the Verkhovna Rada Volodymyr Groysman stressed: “The draft constitutional amendments do not envision any special status to any of the territories. No amnesty to the persons, who committed crimes against humanity, is possible.”

Clause 6: Provide release and exchange of all hostages and illegally held persons, based on the principle of “all for all”. This process has to end – at the latest – on the fifth day after the pullout (of weapons).

Clause 12: Based on the Law of Ukraine “On temporary Order of Local Self-Governance in Particular Districts of Donetsk and Luhansk Oblasts”, questions related to local elections will be discussed and agreed upon with representatives of particular districts of Donetsk and Luhansk oblasts in the framework of the Trilateral Contact Group. Elections will be held in accordance with relevant OSCE standards and monitored by OSCE/ODIHR.