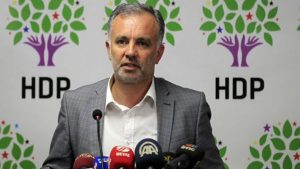 Peoples’ Democratic Party deputy for Kars and party spokesperson Ayhan Bilgen has said 441 HDP members have been detained since the arrest and imprisonment of 10 HDP MPs on November 4.

Speaking to the press in Ankara this morning, Bilgen said there had been a systematic crackdown on HDP members and those protesting the imprisonment of the left-wing pro-autonomy HDP’s MPs, including co-chairs Selahattin Demirtas and Figen Yuksekdag.

The HDP mobilized its members and supporters to oppose the attempted military coup in July.

The spokesperson also said posters of the party’s co-chair Selahattin Demirtas had been banned in Mersin while across the country banners reading, ‘Hands off my MP, hands off my political will’ were also banned and confiscated.

“Even though the judicial process regarding our MPs and co-chairs is continuing and they have not been charged with anything, these illegal practices are being implemented.”

Bilgen called the arrest and imprisonment of HDP members a “post-modern way of closing down a political party.”

The HDP group decided on 9 November to boycott Parliament and ‘return to the public domain’ to discuss the party’s future strategy.

All the HDP’s predecessor parties have been shut down by the Turkish Constitutional Court on grounds of promoting separatism and terror.

The Turkish government has been accused of using the failed coup attempt on 15 July to suppress political opposition within the country.

Also in Istanbul, 15 construction workers who made a press statement and marched to condemn the arrest of HDP MPs two days ago were referred to court for arrest today without giving statements.