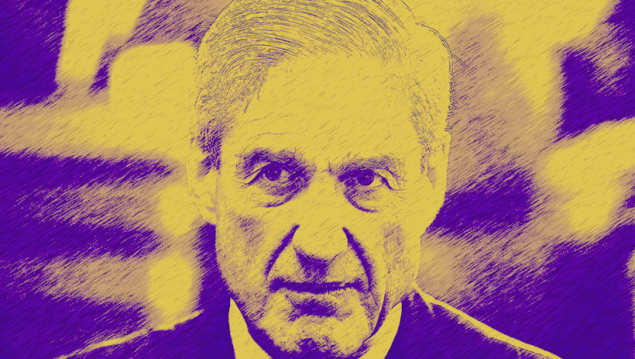 The fake news agenda of the establishment is getting a tad ragged at the edges. Just wait till the economic crash hits then there’ll be some sparks…

All of this is known to be true by every Blairite, every Clintonite, by the BBC, by CNN, by the Guardian, the New York Times and the Washington Post. “The Russians did it” is the article of faith for the political elite who cannot understand why the electorate rejected the triangulated “consensus” the elite constructed and sold to us, where the filthy rich get ever richer and the rest of us have falling incomes, low employment rights and scanty welfare benefits. You don’t like that system? You have been hypnotised and misled by evil Russian trolls and hackers.

[Whether Trump and/or Brexit were worthy beneficiaries of the popular desire to express discontent is an entirely different argument and not one I address here].

Except virtually none of this is true. Mueller’s inability to defend in person his deeply flawed report took a certain amount of steam out of the blame Russia campaign. But what should have killed off “Russiagate” forever is the judgement of Judge John G Koeltl of the Federal District Court of New York.

In a lawsuit brought by the Democratic National Committee against Russia and against Wikileaks, and against inter alia Donald Trump Jr, Jared Kushner, Paul Manafort and Julian Assange, for the first time the claims of collusion between Trump and Russia were subjected to actual scrutiny in a court of law. And Judge Koeltl concluded that, quite simply, the claims made as the basis of Russiagate are insufficient to even warrant a hearing.

The judgement is 81 pages long, but if you want to understand the truth about the entire “Russiagate” spin it is well worth reading it in full. Otherwise let me walk you through it. 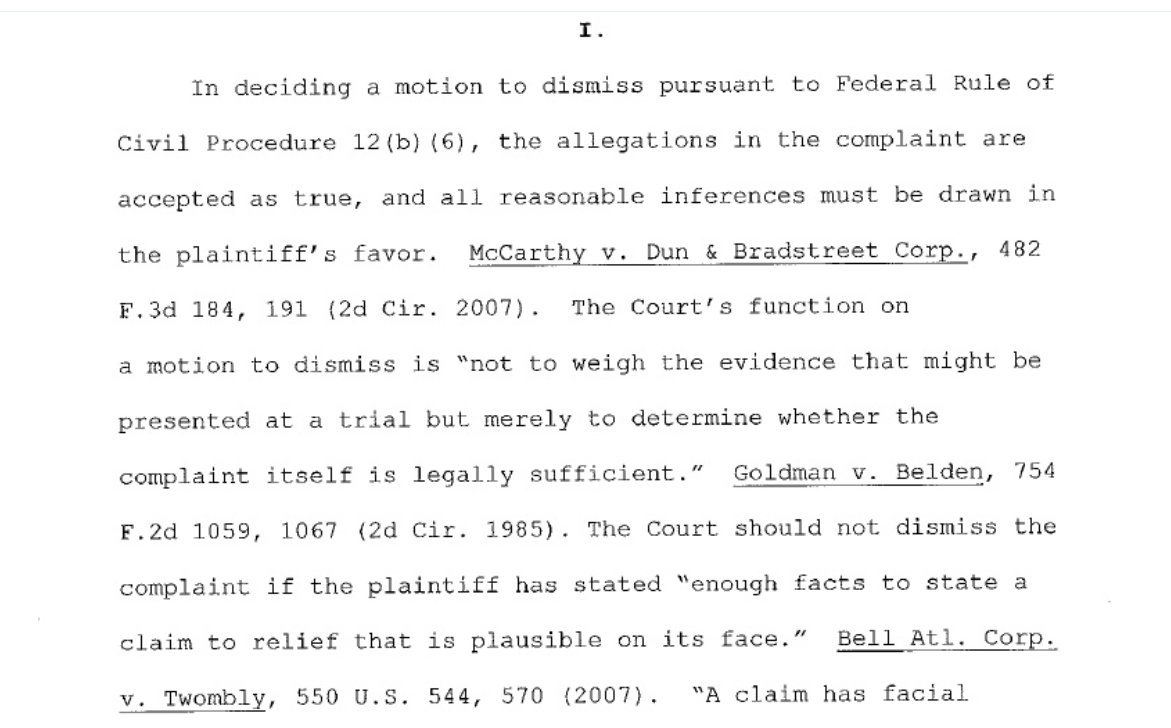 This is the crucial point about Koeltl’s judgement. In considering dismissing a case at the outset in response to a motion to dismiss from the defence, the judge is obliged to give the plaintiff every benefit and to take the alleged facts described by the DNC as true. The stage of challenging and testing those facts has not been reached. The question Koeltl is answering is this. Accepting for the moment the DNC’s facts as true, on the face of it, even if everything that the Democratic National Committee alleged happened, did indeed happen, is there the basis for a case? And his answer is a comprehensive no. Even the facts alleged to comprise the Russiagate narrative do not mount up to a plausible case.

The consequence of this procedure is of course that in this judgement Koeltl is accepting the DNC’s “facts”. The judgement is therefore written entirely on the assumption that the Russians did hack the DNC computers as alleged by the plaintiff (the Democratic National Committee), and that meetings and correspondence took place as the DNC alleged and their content was also what the DNC alleged. It is vital to understand in reading the document that Koeltl is not stating that he finds these “facts” to be true. Doubtless had the trial proceeded many of them would have been challenged by the defendants and their evidentiary basis tested in court. It is simply at this stage the only question Koeltl is answering is whether, assuming the facts alleged all to be true, there are grounds for trial. 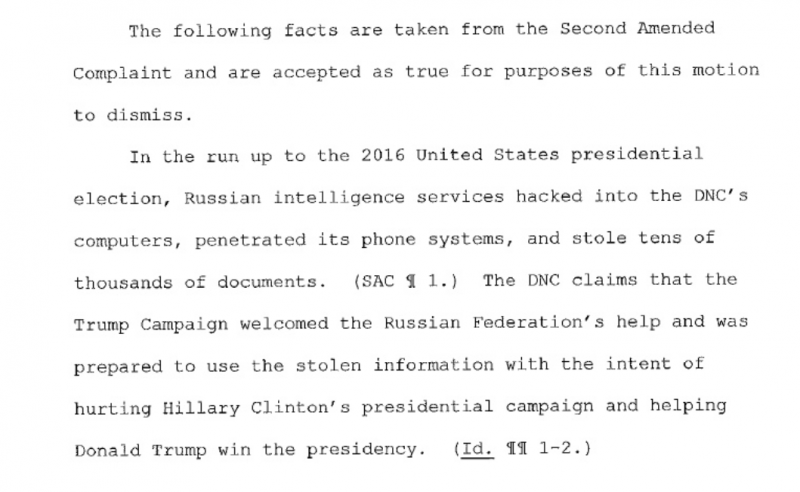 Judge Koeltl’s subsequent dismissal of the Russiagate nonsense is a problem for the mainstream media and their favourite narrative. They have largely chosen to pretend it never happened, but when obliged to mention it have attempted to misrepresent this as the judge confirming that the Russians hacked the DNC. It very definitely and specifically is not that; the judge was obliged to rule on the procedural motion to dismiss on the basis of assuming the allegation to be true. Legal distinctions, even very plain ones like this, are perhaps difficult for the average cut and paste mainstream media stenographer to understand. But the widespread failure to report the meaning of Koeltl’s judgement fairly is inexcusable.

The key finding is this. Even accepting the DNC’s evidence at face value, the judge ruled that it provides no evidence of collusion between Russia, Wikileaks or any of the named parties to hack the DNC’s computers. It is best expressed here in this dismissal of the charge that a property violation was committed, but in fact the same ruling by the judge that no evidence has been presented of any collusion for an illegal purpose, runs through the dismissal of each and every one of the varied charges put forward by the DNC as grounds for their suit. 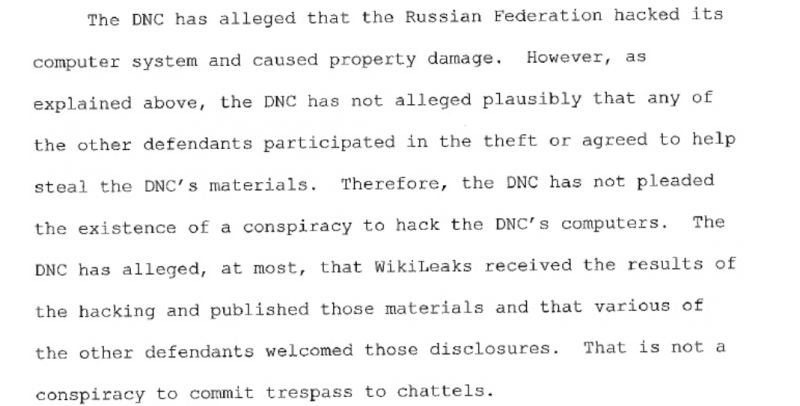 Judge Koeltl goes further and asserts that Wikileaks, as a news organisation, had every right to obtain and publish the emails in exercise of a fundamental First Amendment right. The judge also specifically notes that no evidence has been put forward by the DNC that shows any relationship between Russia and Wikileaks. Wikileaks, accepting the DNC’s version of events, merely contacted the website that first leaked some of the emails, in order to ask to publish them.

Judge Koeltl also notes firmly that while various contacts are alleged by the DNC between individuals from Trump’s campaign and individuals allegedly linked to the Russian government, no evidence at all has been put forward to show that the content of any of those meetings had anything to do with either Wikileaks or the DNC’s emails.

In short, Koeltl dismissed the case entirely because simply no evidence has been produced of the existence of any collusion between Wikileaks, the Trump campaign and Russia. That does not mean that the evidence has been seen and is judged unconvincing. In a situation where the judge is duty bound to give credence to the plaintiff’s evidence and not judge its probability, there simply was no evidence of collusion to which he could give credence. The entire Russia-Wikileaks-Trump fabrication is a total nonsense. But I don’t suppose that fact will kill it off.

The major implication for the Assange extradition case of the Koeltl judgement is his robust and unequivocal statement of the obvious truth that Wikileaks is a news organisation and its right to publish documents, specifically including stolen documents, is protected by the First Amendment when those documents touch on the public interest. 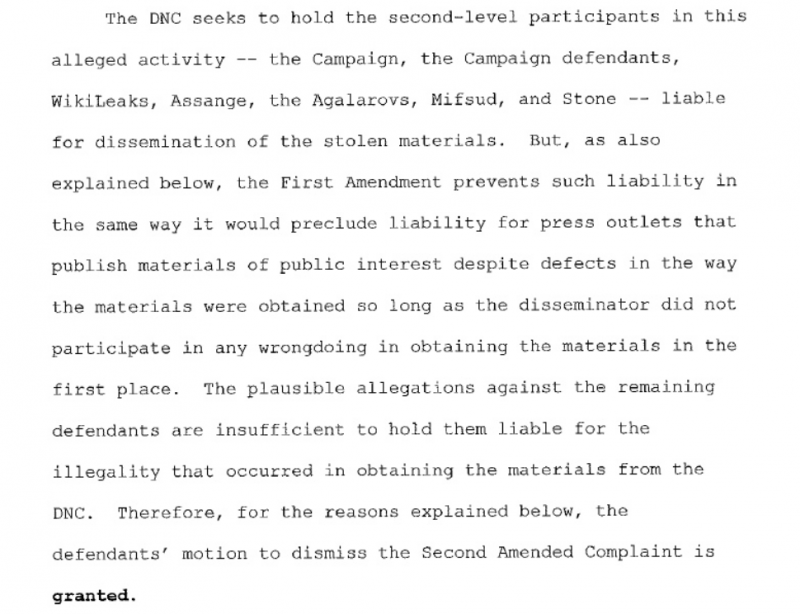 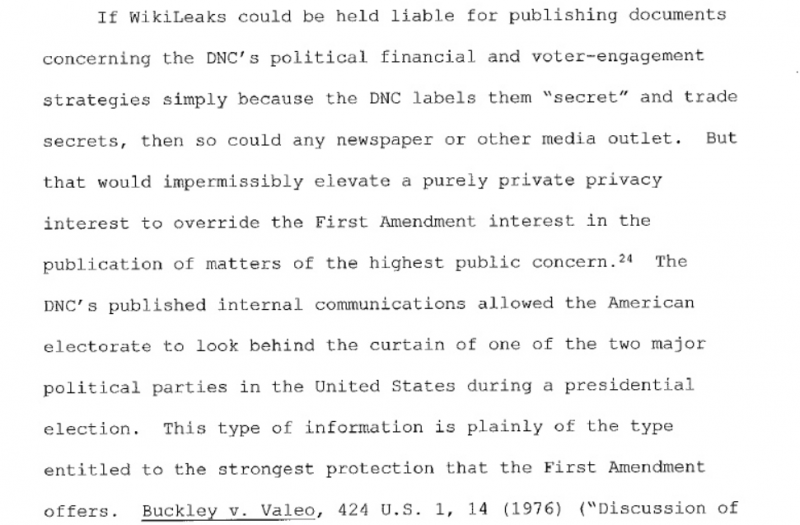 These arguments are certainly helpful to Assange in the extradition case. But it must be noted that the extradition request has been drafted to try to get round the law by alleging that Wikileaks were complicit in the actual theft of documents by Chelsea Manning. Judge Koeltl does not address this question as he was presented with no evidence that Wikileaks had contact with the “hackers” prior to their obtaining the documents, so the question did not arise before him. In the extradition request, the attempt is to argue that Assange encouraged and abetted Manning in obtaining the material. This is supposed to be a different argument.

In fact this attempt to undermine the First Amendment has no merit. Cultivation of an insider source is a normal part of journalistic activity, and encouraging an official to leak material in the public interest is an everyday occurrence in such cultivation. In the “Watergate” precedent, for example, the “Deep Throat” source, Mark Felt of the FBI, was cultivated and encouraged over a period by Woodward. In addition to which, Manning’s access to the documents could not be characterised as “theft”. Leaking of official secrets by an insider is a very different thing to a hack from outside.

And in conclusion, I should state emphatically that while Judge Koeltl was obliged to accept for the time being the allegation that the Russians had hacked the DNC as alleged, in fact this never happened. The emails came from a leak not a hack. The Mueller Inquiry’s refusal to take evidence from the actual publisher of the leaks, Julian Assange, in itself discredits his report. Mueller should also have taken crucial evidence from Bill Binney, former Technical Director of the NSA, who has explained in detail why an outside hack was technically impossible based on the forensic evidence provided.

The other key point that proves Mueller’s Inquiry was never a serious search for truth is that at no stage was any independent forensic independence taken from the DNC’s servers, instead the word of the DNC’s own security consultants was simply accepted as true. Finally no progress has been made – or is intended to be made – on the question of who killed Seth Rich, while the pretend police investigation has “lost” his laptop.

Though why anybody would believe Robert Mueller about anything is completely beyond me.

So there we have it. Russiagate as a theory is as completely exploded as the appalling Guardian front page lie published by Kath Viner and Luke Harding fabricating the “secret meetings” between Paul Manafort and Julian Assange in the Ecuadorean Embassy. But the political class and the mainstream media, both in the service of billionaires, have moved on to a stage where truth is irrelevant, and I do not doubt that Russiagate stories will thus persist. They are so useful for the finances of the armaments and security industries, and in keeping the population in fear and jingoist politicians in power.