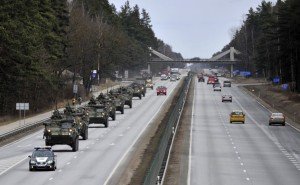 Operation Dragoon Ride is underway, and its purpose seems clear: Show the world some of the firepower the United States and its NATO partners have in Eastern Europe.

The exercise was conceived by Lt. Gen. Ben Hodges, the commanding general of U.S. Army Europe. It launched long convoys of armored Stryker vehicles from Estonia on Saturday that will make their way across Latvia, Lithuania, Poland, the Czech Republic and Germany. Other groups of U.S. soldiers left from bases in Lithuania and Poland, with the three groups of troops meeting next week at Rose Barracks in Vilseck, Germany, Army officials said…

Officials in Washington announced this month that they would send unarmed drones, Humvees and other equipment to Kiev, but thus far have declined to send lethal aid [sic].

A dragoon is a mounted soldier or cavalryman. The operation includes soldiers from the Army’s 3rd Squadron, 2nd Cavalry Regiment, which calls itself the Dragoons and has headquarters in Vilseck, Germany. In addition to the show of force, the operation is designed to have the military interact regularly with civilians across Europe and provide reassurance that the United States is nearby if needed.

[Go to the weblink of this story to see U.S. Army propaganda video and photos contained in the Washington Post report.] 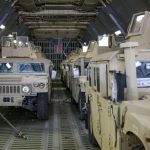 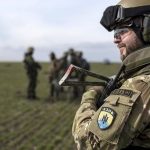