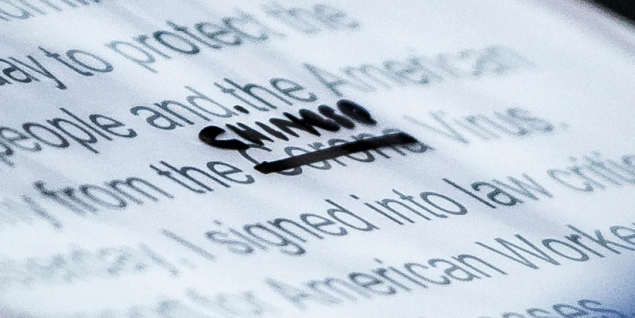 In the interest, first of scoring partisan points and then of finding a scapegoat to blame, the press are ignoring their role as providers of information and refusing to learn the lessons of what techniques work in controlling a pandemic.

We are barely a few months into the year, but it is already clear that the coronavirus will be 2020’s defining event in media and politics. For weeks, conservative media echoed the explicit Trump line that the reaction to COVID-19 was a liberal “hoax” weaponized against the White House. Recent  Presidential Medal of Freedom recipient Rush Limbaugh has been pouring scorn on the media “hysteria”: Extolling how the market was “roaring” (Rush Limbaugh Show, 3/2/20), he claimed it was nothing to worry about. “This virus is the common cold,” he confidently predicted (3/11/20).

Fox News was similar; host Jeanine Pirro (3/7/20) pronouncing that “all the talk about the coronavirus being so much more deadly doesn’t reflect reality. Without a vaccine, the flu would be more deadly.” (The flu kills between 0.1%–0.2% of people catch it, according to the CDC; so far in Italy, 9% of recorded cases have been fatal.) 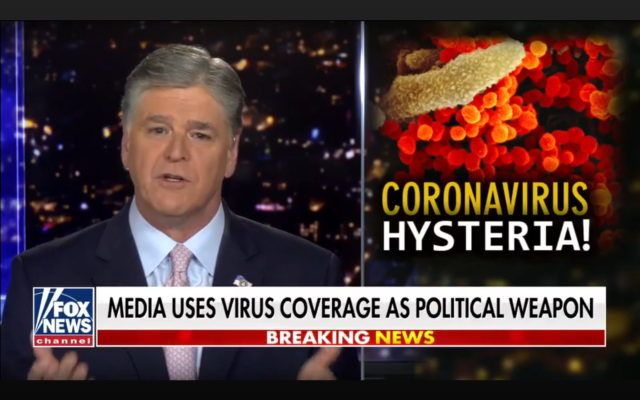 Sean Hannity (Fox News, 3/9/20): “The coverage we are seeing from the media mob is beyond disgusting.”

While posing beside a “Coronavirus Hysteria” graphic, Fox’s Sean Hannity (3/9/20) told viewers, “This scaring the living hell out of people—I see it, again, as, like, let’s bludgeon Trump with this new hoax.” Fox’s medical contributor told Hannity (3/6/20) that, “at worst, worst case scenario it could be the flu.” Host Pete Hegseth (Fox and Friends, 3/8/20) summed up the network’s message: “The more I learn about this, the less there is to worry about.”

Yet, as the bodies piling up across the country became impossible to ignore, the White House—and therefore conservative media—suddenly changed their tone, Pirro (3/22/20) now telling viewers, “We are facing a seemingly incomparable enemy virus inflicting sickness and, in some cases, death as it washes across the world,” and Hannity (3/18/20) outright lying: “This program has always taken the coronavirus seriously. We’ve never called the virus a hoax.” This, while he also complained (3/17/20) about “fake news” and “irresponsible” media spreading disinformation.

The damage has already been done, however; only 47% of Americans (and barely a quarter of Fox viewers) see the virus as a major threat to the country, according to a Pew survey conducted March 10–16, and the necessary generalized lockdown is occurring far too slowly.

Trump has begun deflecting blame away from his administration’s mishandling of the crisis, calling it the “China virus” multiple times (e.g., Twitter, 3/16/20, 3/17/20)—and even being photographed with a script in which he had crossed out the “corona” in “coronavirus” and replaced it with “Chinese” (Washington Post, 3/19/20). Professor Ian Haney Lopez, author of Dog Whistle Politics: How Coded Racial Appeals Have Reinvented Racism and Wrecked the Middle Class, told FAIR that:

Labeling COVID-19 the “Chinese virus” is entirely in keeping with Donald Trump’s pattern of dog-whistling. The term is designed to trigger racist fears (foreigners as disease-carriers), while preserving plausible deniability (defensible as merely a statement about geography). 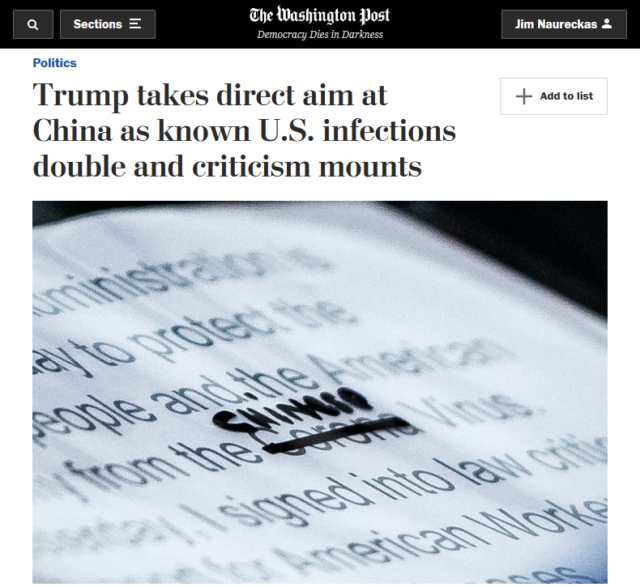 The Washington Post (3/19/20) photographed the text of a Trump speech where “coronavirus” was replaced with “Chinese virus.”

If Trump’s statement was not clear enough, Chinese-American CBS correspondent Weijia Jiang reported that a White House official referred to the virus as the “Kung Flu” in front of her.

As one would expect when the president directs the anxieties of a terrified nation towards foreign scapegoats, the US is in the midst of a wave of anti-Asian racism (New York Times, 3/23/20). A Korean woman was punched in the face in Midtown Manhattan by another woman shouting, “You’ve got coronavirus, you Asian [expletive].” Two Hmong men were refused service by multiple Indiana hotels on the grounds they were likely diseased. Meanwhile, images of Vietnamese-American students being bullied at their California school by other kids yelling “coronavirus” went viral. Given the current environment, it was therefore probably not a good decision by the Sacramento Bee (3/19/20) to publish an article directing readers to where the city’s Asian population live, entitled  “Where Are Sacramento’s Asian and Pacific Islanders Populations? There’s a Map for That.” They have since deleted it.

While there was a good deal of condemnation for the obvious racist undertones in Trump’s speech in “Resistance” media (e.g., New York Times, 3/18/20; CNN, 3/20/20; Washington Post, 3/10/20), many of those same outlets had been using the same or similar phrases for weeks (e.g., New York Times, 1/15/20; CNN, 1/20/20; Washington Post, 1/21/20). Worse still, corporate media have accepted Trump’s premise that China is uniquely to blame and must be “held accountable” for its sins (The Hill, 3/17/20; Fox News, 3/20/20; National Review, 3/21/20). At the March 16 Democratic presidential debate, CNN directly parroted neoconservative deflection tactics, asking both Bernie Sanders and Joe Biden to describe the “consequences” China should face. 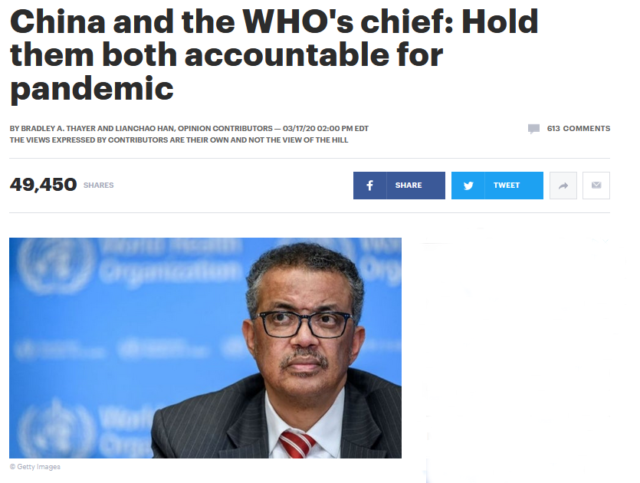 A Hill op-ed (3/17/20) argued that China must be “held accountable” for its “gross mismanagement of the highly contagious disease,” although it is to date the only country to bring a widespread outbreak of COVID-19 under control.

Much of corporate media has played upon Orientalist tropes that the Chinese are inherently sneaky and untrustworthy, and are ruled by an incompetent, authoritarian government that is the “sick man of Asia” (Wall Street Journal, 2/3/20). China appears to be one of the few countries to get a grip on the virus, reporting barely a handful of new local cases this week. Indeed, Chinese-Americans are flying back to China for treatment that is inaccessible in the US. In contrast to the United States, who reportedly attempted to bribe a German pharmaceutical company into giving it exclusive control, access and supply of any coronavirus vaccine it created, making sure it would be available only on a for-profit basis, China has begun sending doctors and huge quantities of medical supplies to other countries.

But much of the media present this action as further proof of the scheming Chinese mindset. On a story about the People’s Republic donating medical personnel, nine pallets of ventilators, tens of thousands of masks and other medical supplies to Italy, CNN (3/19/20) described the action as merely trying to “rehabilitate its image” and “deflect blame,” with correspondent Melissa Bell telling the audience: “But it’s not just Italy. China is also trying to curry favor by helping Japan, the Philippines, South Korea, Iran, Spain as it locked down, and also France.” Those dastardly Asians, currying favor by saving their lives! 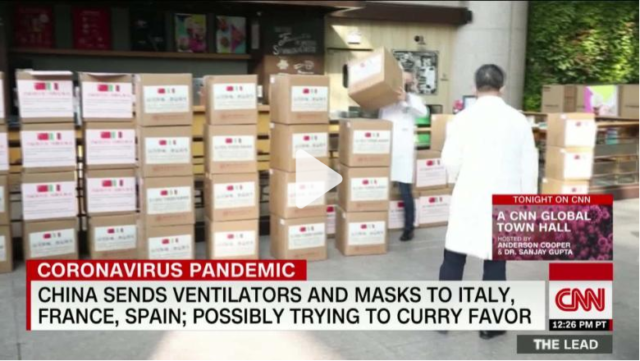 CNN (3/19/20) reported that China was “possibly trying to curry favor” by sending desperately needed equipment “after lying about the virus.”

On the same story, the Guardian (3/19/20) saw this as China’s “propaganda machine” trying to “rewrite history” by using aid as “soft power” and “a propaganda tool,” warning that the aid has “political ends that deserve attention.” The official US propaganda outlet Voice of America (3/19/20), meanwhile, wrote it off as “mask diplomacy” from the “home” of the disease. Thus, an extraordinary lifesaving gesture is written off as more proof of inherent nefariousness. The idea that the Chinese might genuinely wish to stop the rest of the world from dying appears almost unthinkable, so strong is the Sinophobia in much of the reporting.

In its apparent success in bringing a halt to new infections originating within China, it is looking increasingly like China passed the COVID-19 stress test with flying colors. The World Health Organization has heaped effusive praise on China’s total “commitment to transparency” in identifying the virus and sharing information with the world. “I have never seen the scale and commitment of an epidemic response at this level in terms of all of government,” said WHO’s chief executive director for health emergencies, Michael Ryan of Ireland:

The challenge is great, but the response has been massive and the Chinese government deserve huge credit for that response and for the transparency in which they have dealt with this.

Still others believed China did too much. Describing China as a “top-down bureaucracy that brooks no dissent,” the New York Times (3/18/20) argued that Beijing’s “sledgehammer approach” resulted in huge “human trauma” and “public mistrust and resentment toward the government,” and repeating long-debunked narratives (FAIR.org, 3/6/20) about supposed whistleblower Dr. Li Wenliang being silenced. The Guardian (1/23/20) appeared of two minds, unable to decide if China was “botching” its response or “crushing this disease as firmly as it crushes dissent.”

In sum, media are unsure whether China is doing too much or not enough, but they do agree that, whatever it is doing, it is bad.

The idea that whatever China does must be wrong is especially troubling, considering the fact that their tactics appear to have gotten to grips with the pandemic, while at the same time, COVID-19 is on the brink of tearing through the United States with a fury unmatched even in China. While we at FAIR constantly critique corporate media, pointing out how their ownership, structure, funding models and agendas are antithetical to the well-being of the majority of the population, rarely does terrible media coverage so directly threaten human lives. In the interest, first of scoring partisan points and then of finding a scapegoat to blame, the press are ignoring their role as providers of information and refusing to learn the lessons of what techniques work in controlling a pandemic.

Alan MacLeod @AlanRMacLeod is a member of the Glasgow University Media Group. His latest book, Propaganda in the Information Age: Still Manufacturing Consent, was published by Routledge in May 2019.