In photos: The destruction of the Donetsk airport 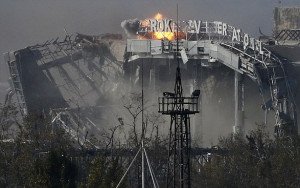 Feb. 26, 2015–The Atlantic magazine has published a stunning series of photographs by various photographers of the destruction by war of the Sergei Prokoviev International Airport at Donetsk, eastern Ukraine. The photo display shows the airport in all its splendour following the major overhaul it received in time for the Euro 2012 Football Championship. Then the photos catalogue the airport’s gradual destruction at the hands of the Ukrainian army and its allied, rightist militias.

Here is The Atlantic‘s introduction to the photo display:

A year of war completely destroyed the Donetsk Airport

In Donetsk, in eastern Ukraine, the Sergey Prokofiev International Airport has been reduced from a modern transportation hub to piles of scorched rubble in less than a year of warfare. As recently as last May, the airport was still operating and in good condition, though international flights had slowed due to the growing unrest. On May 26, Russian-backed separatist forces of the Donetsk People’s Republic seized the airport, losing it to Ukrainian government forces after a brief fight. For months after, battles raged as both sides struggled to hold or retake the facilities, their bombs and rockets destroying practically everything, from buildings and aircraft to roads and trees. This week, as a cease-fire held, rebels (now in control of the ruins) brought Ukrainian war prisoners to the airport to recover bodies of their fellow troops from the rubble, and photojournalists were able to come along and document the scene.