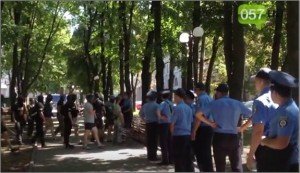 On August 3, the office of the Opposition Bloc party in the center of Kharkiv, the second largest city in Ukraine, came under attack by a mob of 50 or so neo-Nazis  wielding bricks, guns, smoke bombs and concussion grenades. Police stood by and watched, and a little later, a fire brigade called to the scene drove up and then moved on.

The attack on the office followed a decision by the local justice department to deny the Opposition Bloc’s request for registration in order to participate in municipal elections to take place in Ukraine in October.

Below is the text of a statement issued by the Opposition Bloc on August 3. Here is a report (abridged) from a Russian news source:

Offices of the Opposition Bloc party in Kharkiv attacked

He said that on July 24, the party’s deputy to the Rada from Kharkiv, Mikhail Dobkin, filed two documents with judicial officials. One was notice of a request for cessation of the registration of the Party of Regions and its renaming to ‘Opposition Bloc’. The second was to register the regional organization of the new party for the purpose of the October election.

Georgievskiy explained that his office could not fulfill the second requirement. Because it is tied to the decision to cease a previous party, the cessation procedure will take more than two months and for this reason the new party cannot be registered in time for the October election.

He also cited deficiencies in the documents submitted for deregistration of the previous party.

Commenting on the decision, the Opposition Bloc said “We appeal to all democratic countries and international organizations not to recognize the forthcoming elections because they are not permitting the participation of opposition political forces.”

The street riot at the office of the new party began following the court decision. About 50 people bearing flags with black and red colors stormed the office of the former Party of Regions. Unknown persons wearing balaclavas began to dismantle paving stones from a nearby construction site and throw them at the office. They also smashed a nearby parked minibus.

A five-minute video of the attack is posted to the news website 057.ua. The viewer can see the brazen attack on the office. The use of pistols is visible and audible. Also visible is the sacking of a parked minibus. A large squad of police is seen standing by and watching without intervening.

A brief news report of the attack on Radio Free Europe says, “The attackers said they were representing the Ukrainian right-wing nationalist group Right Sector and an organization called Public Guard.”

The RFE report makes no mention  of the firing of weapons by the attackers. On the contrary, it says that it was the mob attacking the office which came under fire. But in the 057.ua video, the attack by the mob is signaled by several pistol shots (at the 2’43” mark). Several dozen defenders of the office are gathered on the street outside its doors. They retreat inside as the attack commences (3’05”). Police are within feet of the attackers, just across the street from the office. They watch, chat and laugh among each other.

As the mob attacks, there is little apparent concern for their own safety as they shoot at the office and throw bricks, some within steps of its entrance. Nor do the police show any concern of a counter-attack from the office.

What may be a few warning shots from the office are heard as the mob retreats from the first wave of attack. Police are shown having retreated by a few feet, but they continue smiling and laughing among each other.

A brief video on UA Today apparently shows  the arrival of heavily-armed soldiers, presumably ending, for now, the attack.

A news report in Russian language is published on Korrespondent.net.

Commenting on the attack on his Facebook page, Ottawa-based researcher Ivan Katchanovski writes, “The Opposition Bloc is an oligarchic organization [ie representing the interests of some of Ukraine’s wealthy oligarchs] which was formed on the basis of the former ruling Party of Regions and which remained the last nominally oppositional faction in the Ukrainian parliament. Its opposition was nominal since the bloc has tended to abstain or not vote on many laws proposed by the government.”

Today in Kharkiv during a peaceful meeting in support of the Opposition Bloc, unknown people in balaclavas kidnapped an activist and attacked the party office. Several dozen youths threw smoke bombs into the building, shots were heard and there is a real threat to people’s lives. A minibus parked near the building was vandalized.

All attempts to register the political party Opposition Bloc in Kharkiv face with fierce resistance from the authorities. In the Kharkiv region, the party has the highest rating of all parties. It looks like this is what frightens the authorities. We state that today’s events are not just a violation of the Constitution and laws of Ukraine; this is also the violation of democratic values, human rights and freedoms.

We demand that law enforcement agencies stop the lawlessness immediately, find the kidnapped person, protect civilians and punish the guilty.

We declare that the Opposition bloc will not back down until our demands are satisfied. The political party Opposition Bloc will be registered.

We will protect our people and make the officials of the Kharkiv regional state administration answer for their action, law enforcement agencies answer for their criminal inaction in the face of those committing lawlessness in the second-largest city of Ukraine. For our part, we will conduct our own investigation concerning the incident. The names of perpetrators of the anti-democratic terror in Kharkiv will be named.