By Yegor Voronov, originally published in Russian on Liva.com, April 8, 2015, translation and editing by New Cold War.org and Counterpunch

The culmination of the Anti-Maidan movement in the Donbas region of eastern Ukraine was the founding of the Donetsk People’s Republic in April 2014. A declaration was issued on April 7. 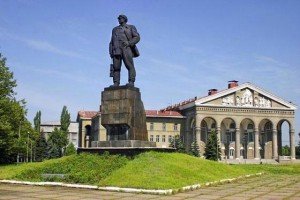 At that time, even the most marginal political figures involved could not have imagined that one year later, the new entity would be on the way to real self-affirmation as a state. Neither “Kremlin agents”, nor “separatists”, of the future Donetsk People’s Republic, occupying the regional administration building in Donetsk at several key moments in March and April of 2014, nor anyone else for that matter, could have given such a powerful momentum for the pro-federalization (autonomy) movement of Donbas as the governing officials in Kyiv.

All along, Kyiv ignored the concerns and basic democratic demands of countless rallies in eastern Ukraine of people who were defending Lenin monuments against destruction and who simply wanted the right to live and work in their language. Their rallies were also forms of popular referendums, demanding an end the reign of the oligarchs (against whom the Maidan movement allegedly fought). Officials of the new government that came to power in Kyiv in February 2014 on the back of the Maidan movement has demonstrated time and again to Donbas residents that it quite literally does not consider them as human beings. 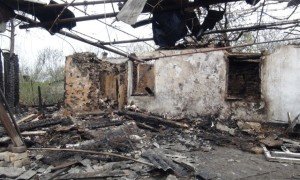 Remains of a house destroyed in a shelling attack on Horlovka, Donetsk region in April 2015 (photo Nikolai Muravyev, ITAR-TASS, published in The Guardian)

Kyiv’s ‘Anti-Terrorist Operation’ launched in April 2014 by the Armed Forces of Ukraine and extreme-right militias convinced thousands of indignant residents of the Donetsk and Lugansk regions to join self-defense militias. These were ordinary citizens who would not have imagined they could take such action, but Kyiv’s violence drove them to create not only self-defense militias but, eventually, something resembling a standing army. Similarly, the cutting by Kyiv of pensions and social payments to Donbas residents beginning last summer [1] has now led to the creation of a pension and social welfare system of the Donetsk People’s Republic.

The fact is, and this may seem a paradox, when Kyiv authorities decided to starve elderly people already suffering from shelling and cold by cutting off their pensions, they expected this would bring the Donetsk People’s Republic to its knees. However, Kyiv officials, who hate the coal dust-tainted proletarians of the Donetsk region, have achieved quite the opposite effect. Their inhumane initiatives have served to further legitimize the new Republic in the eyes of the local residents. They realize, ‘Kyiv does not pay us pensions which we earned and deserved through a life of working hard. It has placed us in a ghetto, surrounded by guns, tanks and soldiers. Isn’t it quite natural for us to assume that this is not our government anymore, that it cares nothing about our fate?’

The actions of the Kyiv government have prompted the development of a new pension system in Donbas. No doubt, it is not yet fully efficient, flawed in many ways. But it is our own system. A parallel development is the emergence of the Central Bank of the Republic, a new taxation agency service and the re-registration of enterprises operating in the DPR. The shortage of Ukrainian currency in the region (created by Kyiv’s economic blockade, which has gone so far as to physically destroy hard currency rather than have it circulate) has led to introduction of a bi-currency system in which the hryvnia and the Russian ruble are legal tender. Dollars and euros are even recognized, for now. 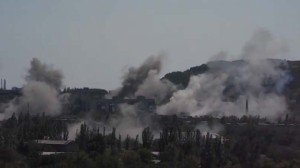 Shelling of Horlovka, near Donetsk, by Ukraine military on July 27, 2014

Indeed, just like one year ago when Kyiv launched its war, the actions to blockade and isolate Donbas economically have created conditions in which Kyiv is the real creator of Donbas independence. Kyiv has literally pushed us out of Ukraine.

What’s more, everyone here understands only too well that were Donbas to rejoin Ukraine, we would receive only “pennies” from lost pensions and, meanwhile, be faced with the new, monstrous tariffs for utilities and other government services which have been imposed by Yatsenyuk’s government as the price of its economic association with the European Union. Our people would not be able to pay for those services with Ukraine’s miserly pensions. We have reached the bottom and are now slowly starting to creep up. Ukraine, on the other hand, is still spiraling downward.

A temporary hut, our Donetsk People’s Republic, is being built among the ruins. Hopefully, it will not be a permanent home, we can move into a larger dwelling with our fellow Donbas people. We actually have nothing to lose – we suffered more than residents of any other region of Ukraine from this war by Kyiv. So all hardships and discomfort are met with stoicism by Donbas residents.

During the past year, the Donbas city of Horlivka [west of Donetsk city] where I live has suffered greatly. Factories have shut down and residents have endured the physical destruction of their homes and communities. We face armed units sometimes not under the control of DPR authorities. There have been grave food shortages, deaths caused by hunger and steady artillery fire into the city by Kyiv armed forces. Yet, despite everything, the city survived and became even stronger. 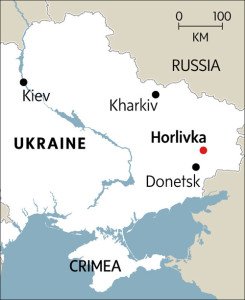 Map by Globe and Mail

Is Horlivka a scarier place now? On the contrary. The residents of Horlivka love their town anew. We have experienced great hardship and we look at life a lot differently now. We have learned how to rejoice with the things that were not noticed and not appreciated before. WE are living the painful rebirth of Horlivka, like a sprout growing through a crack in the wall of a house destroyed by shelling

Do we in Horlivka consider ourselves citizens of the DPR? First of all, we are people who live in the war zone, so we don’t expect to see much justice from authorities or kindness from kings. We appreciate those who help us, and ignore those who hate us. We use the abbreviation ‘DPR’ more and more often as the name of the community to which we belong. You can dissemble it and call it “unrecognized” or “self-declared”. You can even call it a”terrorist organization”. But the fact remains, there are hundreds of thousands of us who are getting used to the fact that we do not live in Ukraine anymore. We breathe, go to work, do chores and accompany kids to school. It’s just like in 1991 when people in Ukraine got used to the fact that they don’t live in the USSR anymore and the capital is no longer in Moscow. It’s a strange and uncomfortable feeling, but it is already quite familiar and people get used to it.

As for the DPR, only one year later it has actually begun the process of becoming a functioning state. The centralization of departmental structures, unification of the armed forces, development of unique laws, resumption duties by law enforcement agencies (courts, prosecution, police), launching of a tax system, reconstruction of the industrial enterprises and hiring for work – all these processes are underway.

Regretfully, too few people thought about these issues last year when, out of protest, they declared the Donetsk People’s Republic. Nobody paid much attention at that time about keeping industry running, ensuring social payments, paying wages, keeping food and other products on the shelves of stores, and so on. A year ago, there was no Donetsk Republic as such – it was slowly born throughout last year. And not in the offices of officials but in the hearts of the people. It was born during air raids and evacuations and on the front lines of battle. As Honoré de Balzac once said: “Suffering is like the iron support placed by the sculptor inside the clay mass to support it and give it strength.”

I would like to write more about the positive things that have happened during this past “republican” year in my city. But I am hearing at this very minute volleys of cannon fire outside my window. So for now, I can’t write more. Being in a state of war, we can hardly speak about peaceful and positive achievements. To demand “improvements in life” when the front line is three km away from your house is like being indignant over the fact that your friend who was knocked down by a car has failed to show up at your party. Now the main task for Donbas is to survive and preserve what remains here. And preserve, as well, the hope that with the end of the war, we will be able restore our region.

One hundred and ten years ago, the left-wing Irish Republicans (people with varying political views, including some quite controversial) created a political movement for independence. It has a poetic name, ‘Sinn Fein’, meaning, ‘Ourselves, together’. These words reflect very well the feelings of our residents as the Ukrainian army and right-wing militias refuse to let us pass to a nearby town without paying a bribe or asking special permission, and as Kiev cuts off the pensions earned by our fathers and mothers.

Notes:
[1] Pensions stopped being paid in the rebel Donbas region in the summer of 2014. In theory, a resident could have traveled outside of the region to collect his or her payment, but at considerable risk. A total cutoff of payments by the government in Kyiv was instituted on December 1, 2014.

This article also appeared in Counterpunch on May 7, 2015. Yegor Voronov is a left-wing activist, blogger and journalist from the coal mining and industrial city of of Horlivka, Donetsk region. He frequently contributes to the Ukrainian left web-journal Liva (English language page here) and reports on the events for Horlivka media 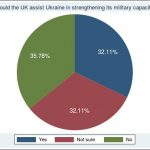 Why Ukraine should take notice of UK Parliamentary electionDigest, Ukraine 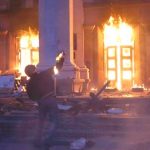