Remarks by Army General Raúl Castro Ruz, First Secretary of the Communist Party of Cuba Central Committee, and President of the Councils of State and Ministers, to the massive, posthumous tribute to Comandante en Jefe Fidel Castro Ruz, in Havana’s Plaza de la Revolución on November 29, 2016, Year 58 of the Cuban Revolution. Published in Granma, daily newspaper of the Communist Party of Cuba. Attending the ceremony were leaders of countries in Latin America and other parts of the world.

Mass commemoration in Havana’s José Martí Plaza de la Revolución on Nov 29, 2016 to honor the memory of the historic leader of the Cuban Revolution, Fidel Castro Ruz (photo on Granma)

Esteemed heads of state and government;

Although it will be my responsibility to present the final speech, this coming December 4, when we gather in Antonio Maceo Plaza de la Revolución in Santiago de Cuba, I wish to express, at this time, in the name of our people, Party, and government, as well as the family, our sincere gratitude for your presence here at this event (Applause), for the moving words you have expressed, and also for the extraordinary, innumerable demonstrations of solidarity, affection, and respect received from the entire planet, in this hour of pain and commitment.

Fidel dedicated his life to solidarity and led a socialist revolution “of the humble, by the humble, for the humble” that became a symbol of the anti-colonial, anti-apartheid, anti-imperialist struggle, for the emancipation and dignity of peoples.

His vibrant words resound in this Plaza today, as they did in the gathering of campesinos July 26, 1959, in support of the agrarian reform, which was like crossing the Rubicon and unleashed a death sentence for the Revolution. Here Fidel reaffirmed, “The agrarian reform is going ahead.” And we did it. Today, 57 years later, we are honoring the person who conceived it and led it.

In this place, we voted to approve, together with him, the First and Second Declarations of Havana, in 1960 and 1962, respectively. (Applause). Faced with aggression by the Organization of American States (OAS), Fidel proclaimed that “behind the Homeland, behind the free flag, behind the redeeming Revolution…. there is an honorable people,” ready to defend its independence and “the common destiny of a freed Latin America.”

I was with Fidel in the building now occupied by the MINFAR, that is, the Ministry of the Revolutionary Armed Forces, (on one side of the Plaza) when we heard the explosion of the French ship La Coubre, which had brought the first and only weapons we were able to purchase in Europe, and we left for the docks to aid the victims, because we knew that that explosion could only have come from the ship that was unloading those weapons, when a few minutes after our arrival, as a lethal trap, a second explosion occurred. The two together caused 101 deaths and numerous injuries.

Here, with him, the Declaration of Cuba as an Illiteracy Free Territory, in December of 1961, was made, (Applause), at the conclusion of the Literacy Campaign carried out by more than 250,000 teachers and students, which did not stop; while this same year, veterans of the Rebel Army and the nascent National Revolutionary Militias battled the mercenaries at Playa Girón, and in mountainous areas, armed bands infiltrated from abroad, which among many other vile acts, murdered 10 young literacy teachers. A victory was won in Girón, and at the same time, the entire country learned to read and write (Applause), to ensure that, as Fidel said at that time, “The young have a future in their hands.” (Applause).

With great emotion, precisely here, we heard the Comandante en Jefe in this Plaza, during the solemn wake of October 1967, to pay tribute to the unforgettable Comandante Che Guevara, and returned here again, 30 years later, during the most difficult stage of the Special Period, to commit ourselves, before his remains, to follow his immortal example.

Moved and indignant, we attended the painful farewell to the 73 persons murdered by state terrorism in the bombing of the Cubana Airlines aircraft over Barbados, among them the young winners of all the gold medals in the 4th Central American and Caribbean Fencing Championships. On that occasion, we repeated with him, “When an energetic and virile people weeps…” (shouts of: Injustice trembles!) Exactly, “Injustice trembles!” (Applause.)

This is the Plaza of important May Day marches in the capital: in 1966, against the Helms-Burton Act, which is still in effect; the enormous march of 1999, and the open tribunal of youth, students, and workers of 2000, when Fidel presented his conception of Revolution, which millions of Cubans have made their own with their signature, over the last few days, in a sacred act of commitment. (Applause).

This is the place where we have come to support the agreements reached at our Congresses of the Communist Party of Cuba.

In this same spirit, the people have come over these last few days, with much participation from youth, to render heartfelt tribute and swear loyalty to the ideas and work of the Comandante en Jefe of the Cuban Revolution (Applause).

Alongside the monument to José Martí, national hero and intellectual author of the assault on the Moncada Garrison, where we have gathered for over half a century in moments of extraordinary pain – and to honor our martyrs, proclaim our ideals, revere our symbols, and consult the people regarding important decisions – precisely here, where we commemorate our victories, we say to you, alongside our self-sacrificing, combative, heroic people: Hasta la victoria siempre! (Onward to victory, always) (Shouts of Siempre! and applause)

Video of the finale of the Sixth Congress of the Communist Party of Cuba, April 2011, with Fidel Castro in attendance

The congress sings ‘The Internationale’, the anthem of international working class unity and struggle. View it here. 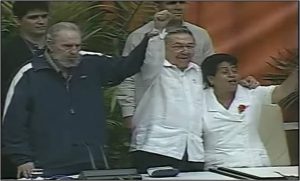