In a bleak and hopeless speech Poroshenko tells his increasingly demoralised army and nation to prepare for “decades of war”. 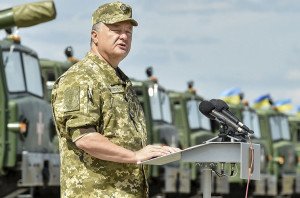 Ukraine’s President Poroshenko has just made yet another  in his seemingly unending series of belligerent speeches. Speaking in Kharkiv on August 22, he openly bragged that Ukraine has used the breathing space provided  by Minsk-2 to build up its army. As he has repeatedly done in the past, he reeled off a long list of ways in which the Ukrainian army has been strengthened with extra men and equipment.

On previous occasions when Poroshenko has made similar boasts, they have turned out to be untrue. Whilst it is undoubtedly the case that the Ukrainian military has built up a numerically large force near the battlefront, reports continue to pour in of poor morale, widespread desertions and equipment failures, and of growing anger and bitterness towards the Ukrainian high command.

It is nonetheless possible – and indeed likely – that some sort of attack on the Donbass is in the offing.  The Saker has provided the fullest discussion of this and I have nothing to add to it.

War-weary Ukrainians listening to Poroshenko’s speech are more likely however to notice the following words: “The military threat from the east is a prospect for decades to come. This threat will not pass anytime soon and every new generation has to have army training.”

In other words, whatever renewed offensive Poroshenko has in mind, he expects the war to go on indefinitely with Ukraine’s youth being increasingly militarised in the process. This is a promise of war without end.

It is also, incidentally, an indication that Poroshenko knows that any offensive Ukraine now launches cannot achieve final victory. In other words, if Poroshenko does now order his army to attack – as seems likely – he is sending his soldiers to fight and die in a battle he knows they cannot win. Nothing perhaps exposes his cynicism – and this war’s futility – more than that.

What these words also show, however, is something else: the extent of Poroshenko’s and of the Maidan movement’s intransigence and their refusal to compromise to the smallest degree on any of Maidan’s maximalist aims even if by doing so they might achieve peace.  Instead, they refuse to compromise even though by doing so they knowingly doom Ukraine to perpetual war.

It should be said clearly that Ukraine does have an alternative to this desperate prospect. It could compromise and work with Russia and the EU to implement fully the terms of Minsk-2. Whilst that might not be a guarantee of peace, it would at least create that possibility.

Instead of implementing Minsk-2 as he promised, Poroshenko has violated it so flagrantly that even those parts of the Western media that habitually support him find it impossible to deny the fact but must instead invent excuses for him (see for example the convoluted reasoning used to justify Ukraine’s failure to carry out Minsk-2 in this editorial in the Financial Times).

Now of course Poroshenko has broken cover and is openly bragging about how he only saw Minsk-2 as giving him a breathing space until he got his army ready.

Even the normally supportive Western media seems startled by the bleak nihilism of his speech.

Meanwhile reports from Ukraine point to a rapidly deteriorating situation.   Reports from eye witnesses and such statistics as the government still provides all point to a situation rapidly approaching breaking point.

The economy is in free fall.  Production continues to collapse, falling far below even the depressed levels of last year.

Attempts to negotiate a write-off with Ukraine’s private creditors are for the moment deadlocked.

Coal production has fallen to World War II levels.  An energy shortage once again beckons and contrary to its boasts Ukraine is once again being forced to turn to Russia for gas, coal and other energy supplies to get through the winter.

As we predicted, the government has proved unable to suppress Right Sector despite the open challenge Right Sector poses to the government. Reports from Kharkiv say Right Sector there is completely out of control, with the police all but vanishing from the streets as the behaviour of Right Sector’s activists becomes ever more brazen.

The situation is becoming so bad that there are signs of growing alarm on the part of Ukraine’s Western backers. Christoph Schiltz, writing for the German newspaper Die Welt, makes his dismay all too obvious:

Ukraine is eroding and the West looks on.  The European Union is helpless. It contents itself with appeals to the parties to the conflict, or demands, as (German) Foreign Minister Frank-Walter Steinmeier has just done, a stronger role for the Organisation for Security and Cooperation in Europe (OSCE) – an observer force that has never played any real role in the conflict in eastern Ukraine.

Ukraine meanwhile is in a vicious circle: threatened by Russia from outside, threatened from within by economic and financial collapse, corruption and militias… (translation from the German by RI)

It says much for the bankruptcy of Western policy that all Schiltz can offer is, however, more of the same: more financial and military support for an obviously failing government in Kiev; more pressure through more  sanctions on Russia. This despite the fact that it is Ukraine not Russia which is refusing to carry out the terms of Minsk-2.

These two realities point to the only way out of this crisis – a change of government in Kiev. If Ukraine cannot be saved because of the intransigent refusal of its government to negotiate in good faith, then it is necessary to change that government to one which will negotiate in good faith – if Ukraine is to be saved. That is the inescapable logic of this situation, which both of Ukraine’s two big outside stakeholders – Russia and the EU – must face.

The EU – which in practice means Germany and Merkel – are still resisting this logic, though Christoph Schiltz’s barren article shows they have no alternative to it.

With events in Ukraine deteriorating fast the time to come up with an alternative may be running short.  A little-noticed comment of Denis Pushilin’s – the DPR’s chief negotiator who is known to be close to Moscow – may point to Moscow’s thinking and to what now lies ahead.

Pushilin said that if Minsk-2 fails, there will be no Minsk-3. That may suggest that if the fighting restarts and Ukraine is defeated – forcing Merkel once more to the negotiating table –  the Russians may refuse to cut any more deals with the present government in Kiev, pointing out how it has failed to honour every one of the commitments it has previously made.

In such a situation, it is easy to see how the Russians – and the east Ukrainians – may instead press for a complete reconstruction of the government in Kiev, putting that rather than a constitutional settlement at the forefront of any future negotiations.

The creation of a government in exile in Moscow looks like it is intended to put the Russians in a stronger position when that moment comes, which given the deteriorating situation will probably be fairly soon.