The government in Pakistan has alleged that Sunday’s no-confidence motion to oust Prime Minister Imran Khan from power was masterminded in Washington.

After a humiliating defeat in Afghanistan and loss of credibility over Ukraine, the era of US unipolarity seems to be entering its terminal phase, marked by lashing out ferociously in all directions. The most recent of these offensives occurred last week when the government of Pakistan alleged that Washington was trying to engineer regime change in Islamabad.

This time the US was caught red handed. The claim was not made via a leak or a fringe observer, but by the prime minister of Pakistan, Imran Khan, himself. While the US State Department has denied any involvement, the political drama has only just begun.

Emerging from a crucial meeting of Afghanistan’s neighbors, China’s top diplomat took a public whack at Washington’s behavior. Foreign Minister Wang Yi said that China will not allow the US to drag smaller nations into conflict and sharply rebuked the ‘US Cold War mentality.’ Beijing is determined not to allow the US to steal Pakistan from its inner circle of vital Asian partners that today include Russia, Iran, Afghanistan, and others.

On Wednesday, when a coalition partner of the governing Pakistan Tehreek-e-Insaf party (PTI) announced its seven members would switch to the opposition, Khan essentially lost his majority in the National Assembly, consisting of 342 parliamentarians. More than a dozen of his party members also threatened to cross the political aisle.

But the Pakistani opposition had mistakenly believed that as soon as they showed their required numerical majority in the parliament, the prime minister would either step down or resign. But that is not what appears to be happening.

Instead, in the next 24 hours, the voting will begin in parliament to count the actual numbers. Many analysts see this as the end of the Khan government in Pakistan; others believe the prime minister’s hold on power will be consolidated and the opposition and their foreign underwriters will suffer a permanent blow.

If the courts entertain the government’s petition to look into the foreign meddling and bribery cases, then Khan may have more time to develop a full court reaction. In just a few days, Khan has already displayed a modest demonstration of his street power. The mood and sentiment across the social media spectrum, as of now, is lopsidedly in favor of the prime minister. Large segments of the public has loudly rallied around him as the spokesman of their aspirations, while opposition party leaders are being characterized as corrupt individuals who want to topple an elected government.

The country’s main opposition parties are the Pakistan Muslim League-N (PML-N) and the Pakistan People’s Party (PPP), both dynastic groups that ruled for decades until Khan came along with his campaign promises to root out the rampant corruption and cronyism that has plagued Pakistani politics for years.

Millions of Pakistanis poured out to see PM Khan speak on 27 March, when he alleged that “foreign powers are engineering a regime change in Pakistan.” Waving a letter drawn from his coat pocket, Khan threatened to reveal direct, written threats to Pakistan and himself.

Top cabinet members [Minister for Planning, Development, Reforms and Special Initiatives] Asad Umar and [Minister of Information] Fawad Chaudhry held a joint press conference where they revealed further details of this controversial letter. Khan then invited several members of his cabinet, media and the Pakistani security community to view the document first hand.

Government opponents dismissed Khan’s allegations outright, amidst an enormous amount of hubris and posturing soon to follow. Pakistani opposition leader Shahbaz Sharif (an aspirant for the prime minister position) proclaimed that he will jump ship and join Imran Khan if the letter is real and the PM was speaking truthfully. Similarly, prominent anti-establishment TV anchor Saleem Safi said that if the letter were real, he would retire from his position and drop out of media altogether.

But within hours, a mysterious petition was filed in the Islamabad High Court (IHC) with the Chief Justice Islamabad Athar Minallah issuing a legal opinion that Imran Khan may not share this letter in public because of his secrecy oath. Such a swift ruling could not have come from Pakistan’s highest judicial authority about a fake letter, surely?

The next day, the country’s National Security Committee (NSC) convened for a meeting. In attendance were Pakistan’s prime minister, the army chief, chairman of the Joint Chiefs of Staff, the Pakistan Air Force (PAF) and naval chiefs, the National Security Advisor (NSA), and several other important officials.

Opposition members boycotted the meeting, but participants took a unanimous decision to reprimand the United States for its actions and ensure that Pakistan would not allow US authorities off the hook so easily. Subsequently, the Foreign Office called the acting US ambassador and reprimanded him – none of which could have conceivably been done on the pretext of a false letter.

What’s in the letter?

According to statements made by Khan during the NSC meeting, senior officials from the US State Department (believed to be an Undersecretary of State) sent the letter on 7 March via Asad Majeed Khan, the Pakistani ambassador in Washington.

The document reportedly states that there will be a no-confidence motion (NCM) against the prime minister soon, that Khan should know that it is coming and that he should not resist the NCM but go down with it. If he tries to resist it, the letter allegedly continues, Khan and Pakistan will face horrible consequences.

The letter mentions the NCM about eight times. The next day, on 8 March, a no-confidence vote was indeed announced. According to Khan, he has security agency information on how the illegal buying and selling of votes took place among Pakistan’s parliamentarians during this time. Then, on 9 March, the nation’s military leadership declared itself ‘neutral’ between the opposition parties and the prime minister.

Khan criticized the military for taking a neutral stance, saying a vital institution of the state should not show “neutrality” to those openly and willfully being used as tools of regime change, orchestrated by the adversaries of Pakistan. But after Foreign Minister Shah Qureshi’s return from Beijing, the military now appears to be favoring Khan’s position. It seems that either a phone call or a message must have come directly from Beijing.

Consequences of US involvement

If the foreign meddling case is a priori to the no-confidence motion, then it is possible that Khan will have legal relief and those accused of collaborating, aiding and assisting an external regime-change conspiracy will be indicted. This would include opposition political party members and Pakistani media personalities who have purportedly been traipsing to and from the US embassy in the days, weeks and months preceding the motion – now set for a seat-gripping vote on Sunday. If this can be proven in a court of law, many opposition leaders may end up behind bars.

According to Pakistan’s highest national security office and judging from the IHC notice, it appears clear that the letter was legitimate and the US is guilty of meddling in Pakistan’s internal affairs. But this is not 2001 when former Pakistani president, General Pervez Musharraf, capitulated to the Americans upon receiving a single phone call. Today’s Pakistan has a stronger self-identity after two decades of grueling and unrecognized sacrifices for Washington’s unsuccessful war on terror. Equally, they now also understand that the US is a declining power.

Most Pakistanis do not care about US sanctions any longer, especially as they watch other nations circumvent them with new allies. The public mood and sentiment is to dismiss sanctions threats, recognizing that there will be consequences from the Pakistani side which could lead to the expulsion of American diktats from the Af-Pak-Iran region.

During his 1 April interview on national television (PTV), Imran Khan exhorted the Pakistani nation to reject the alliance of corrupt parties and western-backed media. He believed that the west’s next step will be to take his life. Pakistan’s information minister had said the same only a day earlier.

If Khan didn’t have the ability to rally the street, they could have spared him, but his current popularity and obstinate resistance to US bullying tactics make him a prime target for assassination. Most Pakistanis have long considered the killing of leaders such as Liaquat Ali Khan, Z.A. Bhutto, Zia al Haq and Benazir Bhutto to be the work of US intelligence. To those citizens, any perceived threat to PM Imran Khan’s life is a real and imminent danger. Very rapidly, the security around him has been reshuffled and new measures have been taken to provide him with extra protection.

Khan’s narrative about US interference has gained heavy momentum in the past week. The storyline is one of two sides butting heads at a critical juncture in the country’s history: on one side, an Indo-US alliance, corrupt Pakistani opposition parties, the country’s corporate media, and a handful of western-styled liberals. On the other side, a legally elected, popular and feisty prime minister, supported by the Russo-China alliance and an overwhelming majority of Pakistanis.

With those odds, it may be politically and legally impossible for Pakistan’s military to maintain its ostensible posture of neutrality no matter how much US pressure comes at it. Time may be on Khan’s side. 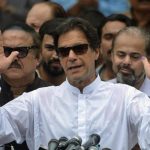 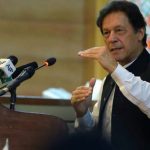