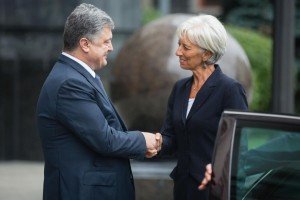 Ukraine’s economy has suffered drastically over the past year or so, in large part due to a still-simmering conflict with Russia-backed separatists in the east.

The Kremlin has rejected Ukraine’s invitation to participate in a debt restructuring, and Kiev has said it won’t be able to pay all of the $3 billion due to Moscow by the end of the year. That could jeopardize Ukraine’s $17 billion IMF bailout and other Western aid that is tied to it, because IMF policy prohibits it from lending to countries that are in arrears to other governments.

But the U.S. and other Western shareholders are preparing next month to change the policy so that the IMF could move ahead with its bailout for Ukraine even if Kiev defaults on some loans to Russia, according to people familiar with the matter.

Ukraine Finance Minister Natalie Jaresko told The Wall Street Journal that Russia’s participation in the debt restructuring is an opportunity to “depoliticize the issue, as it offers the same treatment as our other bondholders.”

In comments after meetings with international officials, Ms. Jaresko signaled the IMF likely wouldn’t let the Russian bond “interfere with the program.”

The IMF’s board is tentatively set to consider the change in late November after leaders from the Group of 20 largest economies meet in Turkey.

Given that Ukraine hopes to secure the next tranche of IMF bailout cash before the end of the year, and the Russian-held bonds are due by the end of December, a November decision would pave the way for a green light from the fund.

Douglas Rediker, a fellow at the Peterson Institute for International Economics and former U.S. representative to the IMF’s board, said changing the arrears policy would allow the IMF “to avoid an outcome where Russia could hold the fund program hostage.”

Mr. Rediker said the fund could create a new exemption to the sovereign-arrears policy that sidestepped official creditors deemed by IMF shareholders as acting in bad faith with a member country.

Moscow bought the $3 billion bond issued in the last days of President Viktor Yanukovych’s government in an attempt to prop up his pro-Russia administration. But a few weeks later, in early 2014, he was ousted by pro-democracy protesters who wanted closer ties with the European Union.

The IMF for years has been considering revising its lending-into-arrears policy, so the current move isn’t exclusively targeted to Ukraine.

Anders Aslund, a senior fellow at the Atlantic Council, said the fund was originally thinking about ensuring China wouldn’t be able to foil IMF lending to member countries seeking bailouts, as Beijing ramped up loans to Africa and other nations.

As with many potential policy overhauls, such a revision was on course for a slow trajectory through the fund’s dense bureaucratic and political machinery.

In March, however, the IMF approved a new loan program for Ukraine that assumed Kiev would seal a $15 billion debt restructuring, which outside economists said couldn’t be completed without including the Russian-held debt.

Three months later, IMF managing director Christine Lagarde announced that the fund would consider in March 2016 a review of the lending-into-arrears policy, with an informal discussion planned for November.

Russian recalcitrance on Ukraine’s debt prompted IMF officials to accelerate the more formal review of the policy, the people familiar with the matter said.

IMF spokesman Gerry Rice said Thursday that “it would be reasonable to expect the board would take up this issue in the near future.” Meanwhile, he said “the IMF encourages both sides to engage in constructive discussions on the restructuring of this bond.”

Clay Berry, the top Europe economist at the Institute of International Finance and the U.S. Treasury’s former attaché in Moscow, sees sufficient support for a policy change.

“There’s enough of a majority on the IMF board that does not want to see the Ukraine IMF program off track,” she said.

Because tweaking its lending rules doesn’t require fiddling with the IMF’s constitution, the supermajority needed for major IMF overhauls isn’t required. In May 2010, for example, the board changed its policy on how much money member countries could tap in an emergency to allow approval of the historic Greek bailout program. It is now considering retracting that change.

‘Ukrainian ideas for defaulting on its debt to Russia cannot be justified on legal grounds. With talks with creditors in deadlock and the economy in a tailspin, default now looks certain.’