Canada’s new prime minister is sounding not-so-new when it comes to the civil war that has devastated the lives of millions of people in eastern Ukraine. CBC News reports that Justin Trudeau directed critical and ill-informed words to Russian President Vladimir Putin two days ago during the G20 summit meeting in Antalya, Turkey. Trudeau’s words portend badly for the people of Ukraine if continued. 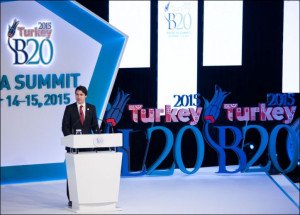 CBC cites Trudeau speaking of his exchange with Putin: “I pointed out that although Canada has shifted its approach on a broad range of multilateral and international issues, we remain committed to the fact that Russia’s interference in Ukraine must cease; that we stand with the Ukrainian people and expect the president to engage fully in the Minsk peace process.”

The reference to the Minsk ceasefire agreement of Feb 12, 2015 (‘Minsk-2’) is ill-informed or malevolent. Russia was a key international sponsor and negotiator of the agreement, along with Germany and France. Canada and the United States were nowhere to be seen or heard from. The agreement was effectively a refutation of the aggressive egging-on of Kyiv’s civil war in which the U.S., Canada and Britain have engaged ever since Kyiv launched its civil war–‘Anti-Terrorist Operation’–in eastern Ukraine in April 2014.

Minsk-2 sets out 13 very specific clauses which must be met by the governing regime in Kyiv and the rebel, pro-autonomy forces in Donetsk and Lugansk. Kyiv has violated every single one of those clauses. Today, only the first two of the clauses are close to being met by Kyiv–a ceasefire, and a withdrawal of heavy weaponry from the front line of the conflict which runs through the heart of the Donbas region (Donetsk and Lugansk oblasts).

Clause four requires the holding of local elections in Donetsk and Lugansk which would recognize principles of local autonomy. Clauses 11 and 12 require constitutional changes that recognize autonomy for Donbas. None of this has happened. On the contrary, Kyiv has crafted new political measures which block and deny said autonomy.

Clauses five and six require Kyiv to provide amnesty to combatants who resisted its civil war and to conduct a full prisoner exchange with the rebel side. It has failed on the first count, and Kyiv continues to hold many combatants and political prisoners it refuses to exchange.

Clause eight requires Kyiv to end its economic sanctions (cutting of social payments) against the population of the east which it implemented in the summer of 2014 and to end its obstruction and blocking of economic transactions. This has not occurred. Indeed, in the the latest in a string of human rights reports critically examining the situation in Ukraine, Commissioner for Human Rights of the Council of Europe Nils Muižnieks admonishes Kyiv for failing to end its economic blockade of eastern Ukraine. His report was issued on November 3.

Clause ten of Minsk-2 reads, “Pullout of all foreign armed formations, military equipment, and also mercenaries from the territory of Ukraine under OSCE supervision. Disarmament of all illegal groups.” Yet Canada, the U.S. and Britain dispatched soldiers to Ukraine in the months following February 12, under the guise of launching “training missions” of the Ukrainian army. And as for the disarming of “illegal groups” (referring to the extremist paramilitary battalions fighting alongside the Ukrainian army), Kyiv has solved that little problem by incorporating the battalions into its National Guard. This effectively worsens the situation by legitimizing the battalions and giving them more formal access to training and weaponry, including from the aforementioned NATO countries.

So if Ukraine has violated the clauses of Minsk-2 so widely, and if the human rights commissioner of the European Union(!) effectively acknowledges much of this, what is Justin Trudeau talking about when he blames a foreign country, Russia, for violations of the agreement?

Trudeau is either being played by the governing regime in Kyiv, or he and his government have decided to play along.

Last summer, Kyiv began to face up to the fact that it could not longer openly flout Minsk-2 and continue its shellings of Donbas. The military setbacks it suffered during 18 months of civil war cannot be easily fixed. Polls of Ukrainians show very high numbers of people wanting an end to the fighting. Kyiv’s economic and social disaster at home is looming ever larger, including an impending default on its foreign debt. And Berlin and Paris decided last summer that a continued war in Ukraine was not in their interest; they had bigger problems requiring their undivided attention. So as of September 1, Kyiv largely ceased its shellings and it began to match the withdrawals of heavy weaponry already begun by rebel forces. This was and remains a significant political setback to Kyiv’s efforts to crush resistance to its pro-Europe, anti-Russia and pro-austerity program.

The one card that remains for Kyiv to play in order to avoid its obligations under Minsk-2 and obfuscate the real situation is the enduring myth of a Russian invasion and occupation of eastern Ukraine. This is what Trudeau is talking about when he speaks of Russian violations of the agreement. He is parroting the wording to this effect that was begun by Kyiv as it faced its forced climbdown on September 1.

Trudeau can get away with uttering nonsense about Russia violating Minsk-2 because the Canadian population has been deeply misled and misinformed about the situation in Ukraine. Parliamentarians of all parties in Ottawa and the country’s corporate media are 100 per cent united behind a hostile, anti-Russia policy that blames all the ills in Ukraine on its large neighbour to the east. Much of the Canadian population knows of no other story of Ukraine than the one it has been aggressively fed for two years now. But the unfolding disaster of U.S., Canadian and European policy taking place in Syria and the Middle East, and the contrast to that of the apparent, early achievements of Russian diplomacy, have growing numbers of Canadians on full alert against more foreign policy deceptions and misadventures.

Justin Trudeau and his government, not to speak of the people of Ukraine, have nothing to gain and much to lose by a continuation of Stephen Harper’s aggressive and hostile policy towards Ukraine and Russia.

The Toronto Star report on Justin Trudeau’s encounter with Vladimir Putin explained, “Trudeau’s brief chat [with Putin] is in contrast with the lengthy discussion that unfolded here between Putin and U.S. President Barack Obama on the crisis in Syria.” 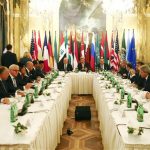