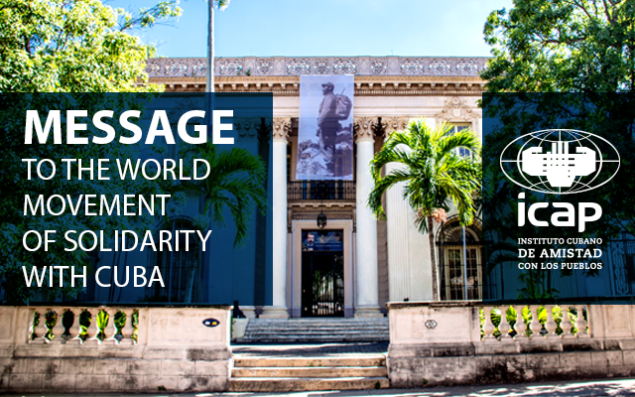 With deep humanistic conviction, the government and people of Cuba offer the world, once again, the example of militant Solidarity at a time when the planet is facing the global pandemic

To the World Movement of Solidarity with Cuba.

With deep humanistic conviction, the government and people of Cuba offer the world, once again, the example of militant Solidarity at a time when the planet is facing the global pandemic of the new Coronavirus Sars Cov-2, Covid-19, which has already claimed the lives of more than 70 thousand people in the world in a very short time.

In the time of Covid-19 the eyes of the world look with hope to Cuba and Cuba, in the midst of an inhuman and genocidal blockade, did not hesitate to respond that with an army of white coats made up of more than 593 health professionals, of them 338 Women, organized in 15 brigades of the Henry Reeve Contingent, already provide their services in Europe, Latin America and the Caribbean, faithful to the Martian and fidelity maxim, ratified by our President Miguel Diaz Canel Bermudez. “Cuba does not go around begging, sisterly”.

Contrary to our humble gesture, President Trump encourages insulting anti-Cuban campaigns to try to discredit the principles of humanity and solidarity on which our medical collaboration defending health care as a human right rests.

This is the time in which the inefficiency of consumer societies of the capitalist system is reveled,   as a result of the anti-popular policies of neoliberal governments subordinated to big capital and US imperialism. Humankind demands solidarity as never before. It is urgent to unite and promote international cooperation.

Our institute proudly recognizes the support of the friendship associations, political organizations, members of Parliament, trade unionists and other political forces that make up the World Movement for Solidarity with Cuba, to our collaborators in the countries where they are already campaigning against Covid 19, as well such as the messages of appreciation sent to the government of Cuba and its people for the solidarity, humanist and altruistic dimension of the Revolution.

For our doctors also our special recognition, respect and admiration wherever they are. They are confronting this pandemic with altruism inside and outside Cuba, as a response of the call of the Cuban government to spread the humanitarian seed of Marti and Fidel, in opposition to actions like those of the United States and other NATO countries, which they spend huge military budgets to the detriment of the living conditions of their populations, fostering fear, hatred and hopelessness.

In the same line, we appreciate the permanent solidarity of the entire Movement that, now in the times of the new Coronavirus, has not stopped acting to demand the lifting of the blockade against Cuba, much more criminal in the current circumstances, also demanding the full application of Resolution “Necessity to end the economic, commercial and financial blockade imposed by the United States of America”, approved in 2019 at the UN by the vast majority of its members.

Together we generate this battle that today tests solidarity between peoples and governments and when it happens, we will embrace with great joy for the victory against the pandemic that is striking us today, to give life to life and celebrate in brotherhood the 60th anniversary from our ICAP.

ICAP message to the World M… by siempreconcuba on Scribd