Iain Macwhirter: Salmond has won one battle. Now another will begin 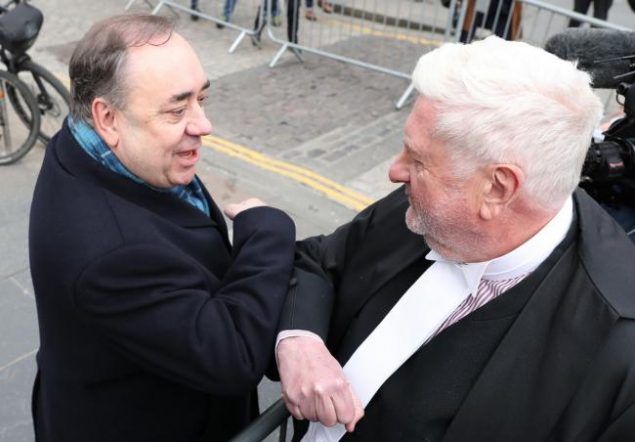 Alex Salmond (left) elbow bumps Gordon Jackson QC as he leaves the High Court in Edinburgh after his acquittal.

“We’ve lost a battle, but we will win the war”. That was how Leslie Evans, the head of the Scottish civil service, messaged a colleague in January 2019 after Alex Salmond won his victory in the Court of Session over sex allegations. This week, they lost the war.

“We’ve lost a battle, but we will win the war”. That was how Leslie Evans, the head of the Scottish civil service, messaged a colleague in January 2019 after Alex Salmond won his victory in the Court of Session over sex allegations. This week, they lost the war.

Mr Salmond did not indulge in triumphalism outside the High Court on Monday after his victory against 13 attempted rape and sexual assault charges. He said the fight against coronavirus was altogether more important right now which is correct. But life will continue after Covid-19 is defeated, and revenge is a dish best served cold.

Mr Salmond believes that a coterie of figures at the highest levels in the Scottish National Party and the Scottish Government connived to have him removed from active politics. That there was a conspiracy by party rivals to use spurious allegations of sexual misconduct to send the most successful SNP politician of his generation to prison.

This is a charge of utmost gravity for the SNP and for Nicola Sturgeon. Some of Mr Salmond’s accusers are among the First Minister’s aides and allies. Their accusations disintegrated under examination in court.

There are questions about what Ms Sturgeon knew about the complaints about Mr Salmond and when she knew about them. But a far bigger question is the extent to which she acquiesced in this attempt to destroy the politician who was her mentor and closest political ally for decades.

Mr Salmond could have gone to jail for the rest of his life. In the era of MeToo and Harvey Weinstein it is extremely difficult for men in public life to mount defences against charges like these. Ms Sturgeon avoided giving evidence in this High Court, but she will have to answer to the parliamentary inquiry, currently suspended.

She continues to defend Mr Salmond’s accusers, who remain in their posts even after their allegations were dismissed by the highest court in the land. I can’t name these people because, even though the jury did not believe them, they still enjoy anonymity.

Complainers are free to make allegations that destroy a politician’s reputation while remaining comfortably in the shadows, and in their highly-paid jobs. Mr Salmond has a legal bill running into hundreds of thousands of pounds. There is no compensation available despite his victory.

They will suffer no penalty. Yet Mr Salmond will surely never live down those lurid headlines about his being a sexual predator. The press had every right to report these claims in an open court, but they will define his character long after his acquittal is forgotten.

Mr Salmond is thought to be considering re-entering public life, but it will be very hard after all this. So, in a sense, his accusers have won even thought they lost – twice.

How much more taxpayers’ money has been expended through the High Court case we will never know. Mr Salmond’s life was minutely dissected in one of the biggest police investigations in Scottish legal history. Approaching 400 people were questioned in around 700 interviews. Scottish Government resources were lavished on this failed effort to prosecute the former First Minister.

So what happens now? Well, Mr Salmond is thought to be writing a book about the case. He’ll spend his coronavirus self-isolation drafting a detailed and damning account that will name names. It will make compelling reading.

He will no doubt be seeking damages from the Scottish Government, not as a result of what happened in the High Court, but over the Judicial Review that he won last year in the Court of Session. The head of the Scottish civil service, Leslie Evans, was responsible for that episode.

Then there is the parliamentary inquiry in which Mr Salmond will reveal the evidence of collusion that his legal team were unable to lead with in his defence. There are reportedly numerous messages and emails shining a light on how his detractors constructed and compiled the evidence of his sexual criminality. These will “see the light of day”, he says.

The repercussions will reverberate through the SNP for years. Edinburgh MP Joanna Cherry has called for “an independent inquiry into how the SNP dealt with these allegations”. Friends of Mr Salmond say that there must be a clear out of the SNP HQ “from top to bottom”.

The Crown Office has questions to answer, too, about why it went ahead with this prosecution when so many of the charges were obviously de minimis. It presumably thought that, under the infamous Moorov doctrine, these allegations would demonstrate a pattern of predatory sexual behaviour. In other words, that if they threw enough mud, some would stick. But the reverse happened. The jury thought most of the charges were ludicrous, and threw out the lot.

This has not silenced Mr Salmond’s many detractors on social media who say that the women should be “believed”. Why would they lie about something so serious? This has become the standard response when any figure is found not guilty of sexual offences.

In a very real sense, in the MeToo era, anyone charged with a sexual offence is assumed to be guilty. The presumption of innocence has been turned on its head.

But the jury, which was mostly female and which heard all the evidence, agreed with Mr Salmond that many of the charges were fabricated or exaggerated, and others should never have come to trial at all. Hair tugging, a kiss, a hand on the knee (allegedly) touching a woman’s bottom (allegedly). The definition of sexual assault has become so elastic as to be meaningless.

There have been calls from anti-rape campaigners to abolish the jury system in rape trials, on the grounds that ordinary people do not understand that all allegations of rape should be believed. But I think the men and women of the High Court jury understood only too well what was going on here. Mr Salmond’s defence said that the whole affair “stank” and they agreed.