I live in Sheikh Jarrah. For Palestinians, this is not a ‘real estate dispute’ 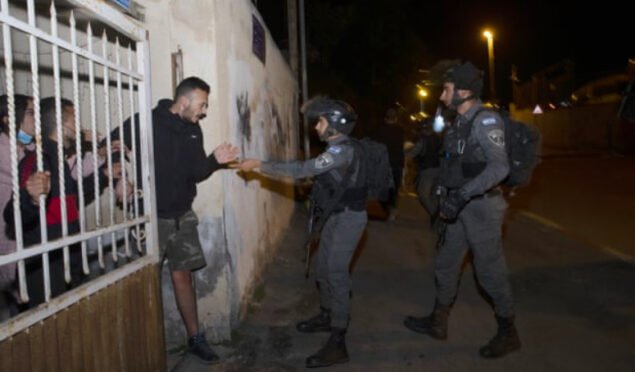 Sheikh Jarrah today smells of dirty socks and rotting flesh. Israeli police vehicles, known as “skunk trucks”, have been spraying Palestinian homes, shops, restaurants, public spaces and cultural institutions with putrid water at high pressure. The water causes vomiting, stomach pain and skin irritation, and was originally developed by an Israeli company to repel protesters. The stench lasts for days on clothes, skin and homes, leading Palestinians to joke that Jerusalem all smells like shit. Protesters are also targeted in other ways. They are brutally beaten, arrested by the police, some on mounted horses, attacked by settlers and sprayed with rubber bullets.

These forms of collective punishment aim to stop the growing movement to save Sheikh Jarrah and halt the dispossession of 27 Palestinian families of their homes there. My family has lived in Jerusalem for several generations since they fled the Armenian genocide in 1915. In 1948, during the Nakba, they were expelled from their home in West Jerusalem and found refuge in the city’s eastern part. Now we live in Sheikh Jarrah and my neighbours are about to be expelled from their homes.

Every day for the past month, Palestinians from all walks of life have gathered in the neighbourhood to share iftar, the breaking of Ramadan fast, outside homes that are under threat: laughing and sharing jokes, together despite the gravity of the situation. Chants and singing start after prayers, only to be met by settlers’ taunts and police repression.

Now the neighbourhood has been transformed into a military zone. Checkpoints at every turn allow residents only into the area, blocking us off from the world. We must endure this harassment from settlers and police alike for simply living in our homes.

While Sheikh Jarrah makes the headlines, this type of harassment and settler violence is not new. Last September, on the day my grandmother passed away, my car was graffitied with “Arabs are shit”. Just two weeks ago, to celebrate Orthodox Easter, I tried to attend the annual parade held by the Syriac and Armenian communities I am part of. Along with other Palestinians, I was assaulted by police officers and prevented from entering the Old City. A few weeks later, worshippers were brutally assaulted as they prayed in al-Aqsa mosque. As Palestinians, we feel every expression of our identity is being erased and marginalised.

Israel’s discriminatory policies in Jerusalem, including planned displacement, is constant. We are discussed as a “demographic timebomb” by Israeli planners and officials. In this city, the idea of a “demographic balance” between Arabs and Jews underpins municipal planning and state actions. Since the illegal occupation of East Jerusalem in 1967, Israeli policy has focused on keeping a 70:30 ratio of Jews to Arabs in the city – later adjusted to a 60:40 ratio when authorities said this was “not attainable”. This is done in myriad ways, including settlement construction wedging in Palestinian neighbourhoods, home demolitions and revocation of residency rights.

Since 1967, an estimated 14,500 Palestinians have been stripped of their residency status. In order to obtain ID cards, Palestinian Jerusalemites have to constantly prove that Jerusalem continues to be their “centre of life”, through proof of rental agreements and bills in their name. This comes with a surprise home visit, to check you really do live in the house, and has included looking to see if toothbrushes have been used in the bathroom. If Jerusalemites leave the country or reside in the West Bank, their residency status is revoked, leaving them without official documents and unable to return home. Every five years I must present myself at the Israeli Ministry of Interior with proof of my residence in Jerusalem and provide transcripts of any course I have taken during my university studies in the UK. On each visit, we are subjected to humiliating and invasive questioning, and each time we worry they may take away our only way to remain.

There have been many attempts to portray the cases of dispossession in Jerusalem, and Sheikh Jarrah specifically, as isolated, individual incidents, painting them as “real estate disputes” that drag on for years in court. But for Palestinians, Sheikh Jarrah is simply a microcosm of life in Jerusalem. It symbolises the continuing ethnic cleansing of our land and homes. Palestinians are enduring erasure, marginalisation and displacement, and they are prevented from the basic right of returning to their original homes and properties.

A grocery store owner in Sheikh Jarrah recently told me: “Our entire lives have just been this … oppression, oppression, oppression. They won’t let us live.” Now, Palestinians everywhere are taking to the streets and demanding their right to life, a life that is free and dignified in their homeland. Sheikh Jarrah is the battle for Jerusalem. After a long experience with Israel’s regime of dispossession, we know what is at stake: our very place in the city. And as bombs drop on Gaza and demonstrations erupt all over the country, Israeli mobs with police complicity march in the streets chanting “death to Arabs”, attempting to lynch Arabs and destroy Palestinian shops and cars. Palestinians, no matter where we reside, are standing up together. Our only option is to live free, and for that to happen, Israel’s impunity must end.

Lucy Garbett is a researcher at the London School of Economics and Social Science based in Jerusalem.