Nobody spoke about the elephant in the room

Russian Media Ban and Assange’s Arrest Demonstrate Doublethink, and all the while nobody spoke about the elephant in the room. In this case a rather poorly looking elephant, in a room with bars on the window.

The UK is currently hosting the inaugural Global Media Freedom Conference, a joint project between the British and Canadian governments. You can read the aims and itinerary on the government’s website, here. 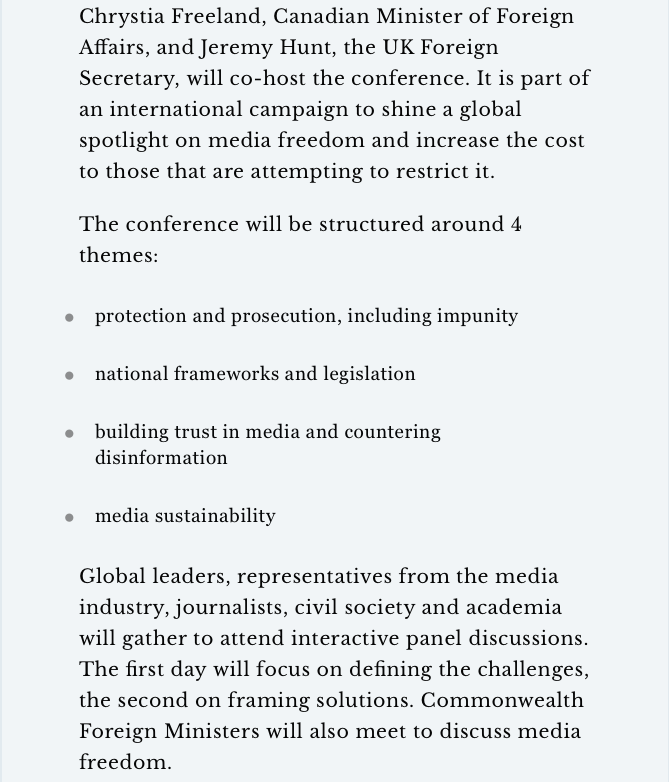 …which all sounds great, doesn’t it?

I mean, “countering disinformation” sounds like state-backed attempts to control what the media can (or can’t) say. Not really in the spirit “media freedom”. And I have no idea what “media sustainability” even means.

But pushing all that aside, the entire event is simply riddled with hypocrisy.

Freeland and Hunt stand at the podium and pontificates about media freedom. How important it is to democracy, and how journalists need to be protected. The pliable audience of mainstream journalists nods along in mute agreement. Happy to be told how important they are, their compromised souls ignored and their over-size egos well fed.

Nobody is talking about the elephant in the room.

In this case a rather poorly looking elephant, in a room with bars on the window.

The British government holding a “Media Freedom” conference around 12km from the prison where it holds Julian Assange is peak brazenness. https://t.co/DBMIiUW7hW

Julian Assange is in prison for holding power to account.
He faces extradition for revealing the crimes
He may be executed for telling the truth.

The UN Special Rapporteur called what the UK government has done to Assange, “tantamount to torture”. To have a “media freedom” event in this country, without mentioning that, is beyond absurd.

The second controversy surrounding this public-relations fuelled farce is the fact that Russian media agencies RT and Sputnik were denied accreditation by the foreign office.

We have not accredited RT or Sputnik because of their active role in spreading disinformation,”

…the UKFO said in a statement.

Two media organizations, banned from a “Defend Media Freedom” conference, because of what they have published.

RT’s statement was short, to the point and pretty much irrefutable:

It takes a particular brand of hypocrisy to advocate for freedom of press while banning inconvenient voices and slandering alternative media.”

In fact, this is just the latest attempt by the British government to undermine alternate media in general, and specifically RT.

Ofcom, the UK government’s media regulator, has called RT to task over it’s coverage of several times, and the channel had their UK-based bank accounts frozen in 2016.

It’s no better across the pond, where RT was forced to register as a “foreign agent”in 2017, under an arcane law dating back to WWII. (Why Trump allowed this to happen remains a mystery. Worst. Puppet. Ever.).

The BBC (formerly known as the British Broadcasting Corporation), in the spirit of defending media freedom, had a nice long write up about how terrible RT is, and why they don’t deserve to cover Western events.

The little video explainer they did, “What’s so different about Russia Today” was delightful enough to warrant its own write-up.

You could not fit more hypocrisy into less than two minutes of video if you tried.

Kit Knightly is co-editor of OffGuardian. The Guardian banned him from commenting. Twice. He used to write for fun, but now he’s forced to out of a near-permanent sense of outrage.