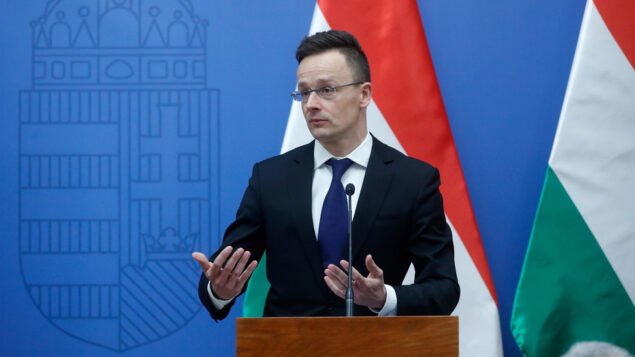 EU sanctions over China’s alleged human right abuses and against Myanmar officials for the on-going military coup, are the wrong move amid the need for stronger global ties, the Hungarian foreign minister said on Monday.

EU sanctions over China’s alleged human right abuses and against Myanmar officials for the on-going military coup, are the wrong move amid the need for stronger global ties, the Hungarian foreign minister said on Monday.

“Such a decision of strategic importance is particularly pointless at a time when the importance of international cooperation is growing tremendously, when lives should be saved instead of austerity measures,” Peter Szijjarto told reporters.

His comments came after the Council of the European Union on Monday imposed sanctions against 10 military officials in Myanmar, including the country’s de facto leader, Min Aung Hlaing, who seized power in a coup on February 1, 2021.

The EU also slapped sanctions on Myanmar’s elections chief for scrapping the results of the 2020 vote, which allowed the army to oust State Counsellor Aung San Suu Kyi and her democratically elected government.

On Monday, the council also announced sanctions against four Chinese regional party representatives and an organization in the northwestern Xinjiang province over the alleged forced detention of Uighur Muslims in the region.

The sanctions are the EU’s first against China for alleged human rights abuses since the Tiananmen Square protests in 1989.

Szijjarto suggested that, while the EU was busy imposing sanctions on the other side of the world, the bloc was failing to recognize alleged human rights abuses committed in Ukraine against the country’s Hungarian minority.

Around 150,000 Hungarians live in the Ukrainian border region of Transcarpathia, where they have allegedly faced suppression for using their native language and trying to express their own culture.

“We expect both the UN and the European Union to be at least as vocal on this issue as they are about alleged or real human rights violations thousands of miles away,” Szijjarto said.