How the West brought about Kiev’s sniper massacre

Whoever actually carried out the massacre, Western declarations that Yanukovich would be blamed for all and any violence played an indispensable role in setting up the scene for it 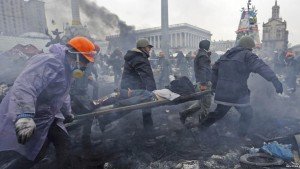 In the run up to today’s Kiev Sniper Massacre one year anniversary, we were treated to separate investigations by Germany’s Frankfurter Allgemeine Zeitung  and the BBC into the events of that day. Billed by the BBC as “The untold story of the Maidan massacre” the investigation reveals supposedly shocking new information about the protesters.

Actually, the gist of the new revelations – that Maidan protesters fired upon Ukraine policemen – is anything but shocking. It has never been a secret that scores of policemen were wounded by gunshots on that day, including some who died. To a lot of people, that has been a good indication the protesters did at least some of the shooting all along. The only really new thing here is that now we have a confirmation of that by a gun-toting protester who did some of that shooting – though he claims he only fired at the policemen’ feet.

What the BBC-FAZ tag team serve up, then, is no real investigation into the lethal side of the Maidan protest movement but merely the attempt to patch up and rejuvenate the story of Kiev Massacre as the work of Ukraine policemen.

Seeing the old story of Ukraine president Yanukovich ordering a massacre of protestors for no good reason seem more ludicrous with each passing day. Western press now concedes a few minor points about Maidan protesters to try to preserve and prop up the larger story of Maidan’s victimization at the hands of Yanukovich police.

In the new version, the Maidan protesters are not the unsuspecting victims of arbitrary brutality. Instead, they contributed to the violence in some small way, which helped provoke and trigger the disproportionate counter-violence and massacre by police snipers.

The basic problem of the Maidan mythology is explaining how did Ukraine policemen go from being the picture of restraint in the early hours of February 20th to stacking bodies six feet high later on in the day? The answer provided by the Maidan Massacre Narrative 2.0 is that they were provoked by protesters who used live fire against them. Specifically, to thwart the police in its near-successful attempt to clear the Maidan square using Western policing methods that rely more on water cannons than batons. Business New Europe provides a useful summary:

Now two accounts have come to largely the same conclusion: the police, having moved onto Maidan. and apparently gaining the upper hand against the protest camp, pulled back abruptly because they were fired upon by armed groups within the protest camp.

The two reports suggest that the protest camp on the Maidan did have an armed wing of riflemen, based in the Kyiv Conservatory, who fired on police at the moment on February 20 when it seemed that they might succeed in dispersing the camp. Suffering casualties, police pulled back up the hill abruptly, unarmed protestors spontaneously rushed after them intending to re-erect barricades, and it was then that police opened mass fire.

This finally makes the Maidan Massacre story at least plausible by establishing a motive. Accepting that police killed the 100 or so protesters and Maidan riflemen opened fire on them first is a somewhat plausible explanation of what could drive them to do so. It also means the question BBC and FAZ are answering is not what happened on that day in Kiev, but how did Yaunkovich’s police come to massacre protesters – which is accepted as a fact requiring no confirmation.

For some reason, the confirmation of presence of Maidan riflemen willing to inflict injury hiding in nearby buildings did not cause BBC/FAZ to re-examine their basic premise of police responsibility for the mass killings. Let’s pick up the slack for them. Here is the situation on the day of the massacre as given by the new and improved Maidan narrative, invaluably summed up by Business New Europe:

In the early hours of February 20, 2014, Ukrainian security forces successfully used three riot-control vehicles fitted with water cannons – newly acquired from Russia – to drive protestors back down from the steep hill leading up to the government district and onto Independence Square (known as Maidan) itself. Towards morning, police and interior ministry troops came in behind the riot-control vehicles to take up positions on the square itself, for the first time since the start of the opposition protest camp in early December 2013.

Apparently concerned to avoid any scenes of violence that might trigger sanctions against the government, as threatened by the EU, the riot police and interior ministry troops used Western methods of crowd control – moving in behind the water cannons, linking arms and using their massed weight to start dividing up the protest camp crowd – which at the start of working day totalled at the most a few thousand.

With the police taking up positions on Maidan itself, and protestors having no answer against the water cannons – except that one of the vehicles was reportedly disabled by a petrol bomb – it seemed that the protests camp would soon be dispersed.

Then something happened that seemed at the time to the protestors to be a miracle – the police abruptly pulled back from the square and disappeared back up the hill on Institutksa, towards the government district

What the account reveals is that just before the massacre Maidan was in its last throes and about to be defeated. It had dwindled to a few thousand protesters at most and was about to be cleared by police, which furthermore was effectively using methods of crowd control perfected in the West that do not produce graphic scenes.

Not only was Maidan about to be dispersed, but it was going to be done in a way that denied the protesters a PR victory. It makes perfect sense that in this moment, Maidan riflemen would fire on police, both to prevent the square from being cleared and to provoke the police into unleashing gory violence of its own, thus delivering the protesters a moral and media relations victory.

Throughout the months long government-protester standoff in Ukraine, the protesters enjoyed enthusiastic moral support from the West. Effectively, Western officials behaved as if Yanukovich was an illegitimate usurper of power that properly belonged to the protesters and the opposition. Western governments glossed over the violent nature of the Maidan revolt, but condemned any force used to contain them as illegitimate. On the eve of the Kiev Massacre, for example, US president Obama was still talking about “peaceful protesters” and warning about “consequences” if Yanukovich government came down too hard on them.

Just two days before the sniper massacre, 25-30 people were killed in clashes on the Maidan, including ten policemen. Though violence was, therefore, obviously two-sided, Western officials pinned all blame on Yanukovich government. What is more, they declared Yanukovich would be held responsible for any and all violence that would occur in the future.

“We must be clear: Ultimate responsibility for deaths and violence is with president Yanukovich. He has blood on his hands.”

US Ambassador to Ukraine, Geoffrey Pyatt:

“From this moment on, the USA holds Yanukovich responsible for everything that happens in Ukraine.”

Obama himself warned that Ukraine government was “primarily responsible” to ensure there would not be more violence. Clearly this gave the protesters every incentive to try and escalate the violence. However gory scenes came about, the West had just publicly proclaimed it was going to assign blame on the Yanukovich government.

Up until here, the FAZ-BBC take makes perfect sense. It is infinitely logical that in the morning of February 20th, elements of the Maidan protest movement would seek to escalate violence, including by firing on police to try to provoke mass counter-fire. The question is how likely was Yanukovich police to oblige them? Another question is would the Maidan riflemen have a fallback plan whereby if the police refused to take the bait, they would enact a massacre on the protesters themselves? It is impossible to definitely answer this question at this point, but here are some circumstances to consider:

This might imply police were not ready for radical steps but the Maidan shooters were. However, we can not know this for sure. What can be said without a doubt is that – whether the Kiev Sniper Massacre was a result of Maidan riflemen successfully provoking a police overreaction, or going as far as to kill protesters in their stead – the West is responsible for setting up the circumstances where both made perfect strategic sense.

Western obsession with de-legitimizing Yanukovich and declaring its moral supremacy over him led to a situation where any and all deaths worked in favor of the protesters. Nobody should be surprised then if Maidan riflemen on February 20th set out to do something that would produce the deaths the West seemingly thirsted for.