How the Media Manufactures Consent for Regime Change in Venezuela 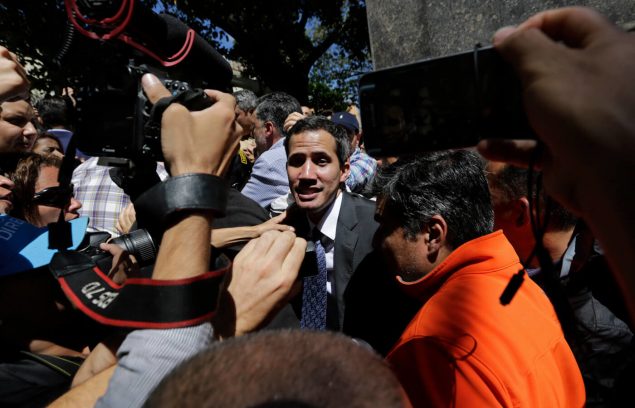 Juan Guaido speaks to the press as he leaves a public plaza where he spoke in Caracas, Venezuela, Jan. 25, 2019. Fernando Llano | AP

In this article, academic and author Alan MacLeod looks at the role of the media in fomenting popular support for the regime change operation in Venezuela.

The latest extraordinary chapter in the bizarre world of Venezuelan politics is playing out before our eyes. After winning the 2018 presidential elections, Nicolás Maduro was inaugurated in January, only for the head of the National Assembly, Juan Guaidó — a man whom, at the time, less than 20 percent of the country had even heard of — to declare himself President.

Guaidó was immediately backed by the governments of the U.S. and U.K., with Vice President Mike Pence stating, “Nicolás Maduro is a dictator with no legitimate claim to power. He has never won the presidency in a free and fair election, and has maintained his grip of power by imprisoning anyone who dares to oppose him.”

I’ve previously cataloged how the media has been quick to echo the ideathat Maduro is completely illegitimate and has been eager to position America’s stance towards Venezuelan politics as one of a neutral arbiter.

Why do mainstream media outlets, who resist Trump at home, neatly align themselves with his administration’s Venezuela policy? And why has there so little criticism of what is essentially an ongoing U.S.-backed coup attempt?

In a recent study, I analyzed how the media presented the 2018 elections in Colombia and Venezuela. Looking at how these two elections were covered can help us understand why there’s so little nuance in the media coverage of U.S.-Venezuela relations.

To study the 2018 elections, I used the propaganda model media scholars Edward Herman and Noam Chomsky outlined in their book Manufacturing Consent. Their propaganda model contends that mainstream, corporate media is not a neutral venue for truth. Instead, it is a vehicle that advances the interests of media owners and their advertisers.

The authors argue that, in contrast to the top-down censorship of authoritarian states, these outlets achieve uniform opinions through the pre-selection of “right-thinking” editors and reporters who have been trained at the “right” schools. They then disseminate information – or, at the very least, self-censor – in a way that protects or advances the ideology of ownership, advertisers and official sources.

Herman and Chomsky highlight this phenomenon through coverage of elections in three countries: Guatemala, Honduras and Nicaragua.

The Guatemalan presidential election of 1982 and the Honduran presidential election of 1984 to 1985 were held under what Herman and Chomsky describe as “conditions of severe, ongoing state terror against the civilian population.” They show how the U.S. media ignored the enormous waves of violence inundating these two elections. CBS’ Dan Rather, for example, described the events in Guatemala as “heartening.”

Meanwhile, Herman and Chomsky explain that the 1984 Nicaraguan elections were won by the Marxist sandinistas in a “model of probity and fairness by Latin American standards.” Yet American media coverage portrayed this election with a relentless tone of negativity. Time Magazine reported that the election mood was “one of indifference,” with voters “too apathetic to go to the polls” and that “the outcome was never in doubt,” suggesting a rigged system, while many articles discussed the “fear” of Nicaraguan voters.

Mainstream media coverage, they concluded, manufactured a reality that was conducive to the interests of the U.S. government – which sought to prop up their client states and demonize Nicaragua – and multinational corporations, who were eager to work with sympathetic right-wing governments to increase their foothold in Central America.

Using this paired example method to test the propaganda model I studied Western media coverage of the 2018 elections in Colombia – a key U.S. ally – and Venezuela, a sworn enemy. In Colombia, the conservative Ivan Duque triumphed; in Venezuela, the socialist Maduro won.

The elections in Colombia took place under a heightened state of terror, with the left-wing candidate Gustavo Petro narrowly surviving an assassination attempt and right-wing paramilitaries issuing generalized threats to those who tried to vote for him. The incumbent conservative party under President Alvaro Uribe had massacred over 10,000 civilians, while American election observers, such as University of Pittsburgh law professor Daniel Kovalik, were mistaken for voters and offered bribes to vote for Duque. There were over 250 official electoral fraud complaints.

The mainstream media, however, overwhelmingly endorsed the elections in the U.S.-ally state, presenting it as a moment of hope for the country and downplaying any negative aspects, especially violence. CNN reported that“though there have been isolated incidents of violence related to the election, they have been minimal.” The Associated Press went further, claiming the real danger facing Colombia was that Petro would push the country “dangerously to the left” while NPR described Alvaro Uribe as “immensely popular,” and failed to mention any connection to the massacres his government had implemented. 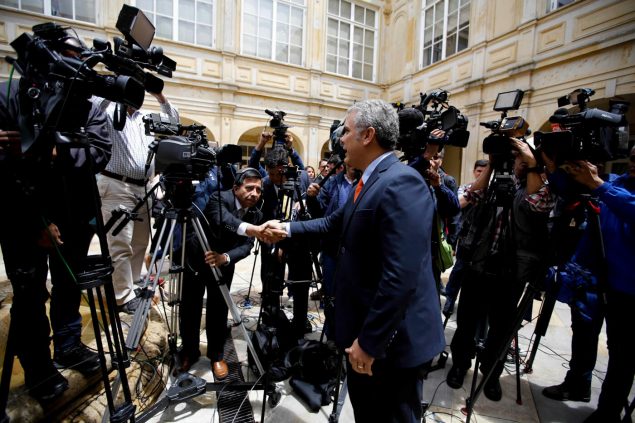 In contrast, the mainstream media virtually unanimously presented the simultaneously occurring elections in Venezuela as a travesty, the “coronation of a dictator,” according to The Independent. Other major outlets described them as “heavily rigged,” “the fortification of a dictatorship” and a “farce cementing autocracy.” The Miami Herald called them “fraudulent,” a “sham,” a “charade” and a “joke” in one column alone.

There were certainly some questionable aspects to the Venezuelan election. However, the idea of a full-blown “sham election” was flatly contradicted by every international election observation organization monitoring the elections, many of whom produced detailed reports attesting to their exemplary organization and implementation. There were a number of prominent international observers monitoring the 2018 elections, including former Spanish Prime Minister Jose Zapatero, who said he “did not have any doubt about the voting process” and the ex-President of Ecuador, Rafael Correa, who declared the “impeccably organized” elections proceeded with “absolute normalcy.”

But you would have been hard pressed to find any acknowledgment of this in Western media outlets.

The administration shows its true hand

Instead, since Maduro’s swearing-in, many seem to have been openly championing regime change in the country. One of the few positive things about the Trump administration is that it does not try to conceal its true intentions behind misleading, flowery words. John Bolton, Trump’s National Security Advisor, has openly described Venezuela as a business opportunity.

“It will make a big difference to the United States economically if we could have American oil companies really invest in and produce the oil capabilities in Venezuela,” he said.

With clear parallels to the build-up to the Iraq War, he also labeled Venezuela as belonging to a “troika of tyranny” and recently suggested sending Maduro to Guantanamo Bay. The U.K. government has blocked the transfer of Venezuela’s gold out of the Bank of England after it declared Guaidó its legitimate leader. At the same time, the U.S. has ramped up its sanctions on the beleaguered nation, in spite of pleas from the UN to do the opposite. The Human Rights Council formally condemned them, noting they made the crisis far worse. One Special Rapporteur declared them a possible “crime against humanity”.

And yet the press overwhelmingly abets the pretense of “democracy promotion” and protection of human rights. The Washington Post, for example, applauded the administration’s actions, urging it to work with the body to tighten the sanctions while claiming Guaido had given hope to the people of Venezuela.

The mainstream media seems to ignore the opinions of everyday Venezuelans. Eighty-six percent are against military intervention and 81 percent disagree with the current sanctions, according to a recent local poll. Perhaps there’s a ulterior motive to the mainstream media’s uniform approach in delegitimatizing Maduro’s regime: to undermine and attack the rise of socialist-inspired ideas back home.

When it comes to key issues such as foreign policy, the charade that the media cares about impartiality and truth withers away to reveal its true role in serving the powerful.