How Bosnia Became an Easy Target for the Far Right 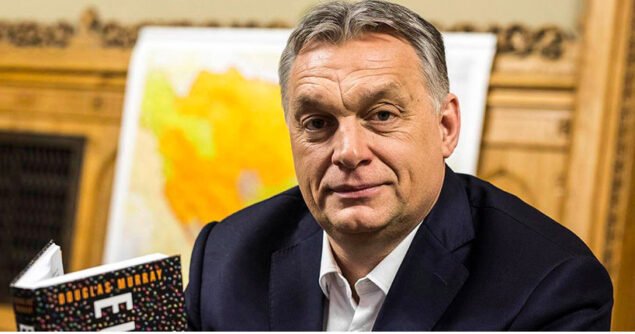 Far-right European politicians such as Hungary’s Viktor Orbán have been making common cause with Serb nationalists who seek to tear Bosnia and Herzegovina apart.

In February 2018, Giorgia Meloni, a seasoned Italian right-wing politician, tweeted a photo of Hungary’s far-right prime minister Viktor Orbán attending a roundtable meeting in his cabinet with a demographic map of Bosnia and Herzegovina directly opposite him. Shortly afterwards, another photo surfaced showing Orbán holding a book by then Associate Director of the UK’s Henry Jackson Society Douglas Murray, arguing that immigration is destroying Europe. Again, clearly in the background of Orbán was the same demographic map of Bosnia and Herzegovina.

Though Bosnia and Hungary are in relative geographical proximity to each other, they have never enjoyed particularly close relations. So why would Hungary’s prime minister have a map of Bosnia – depicting where its Bosniaks, Serbs and Croats were living – inside his cabinet room?

In recent weeks, Orbán and his closest associates have once again been making headlines in the Balkans with their unambiguously malicious comments about Bosnia and its majority Muslim population. In a recent speech, excerpts of which were tweeted by his spokesperson Zoltán Kovács, Orbán seemed to suggest that accepting Catholic-majority states such as Croatia into the EU – despite the block’s ‘enlargement fatigue’ – was permissible, but that it would be far more difficult to include countries like Bosnia and Herzegovina due to its large Muslim population. ‘I am doing my best to convince Europe’s great leaders that the Balkans may be further away from them than from Hungary, but how we manage the security of a state in which two million Muslims live is a key issue for their security too’, Orbán said.

However, Orbán has one friend in Bosnia and Herzegovina who is highly placed. His name is Milorad Dodik, and he is the Bosnian Serb member of the country’s tripartite presidency and the most powerful Serb political figure in the country. Dodik is a Serb ultra-nationalist and an ardent genocide denier who regularly insults the country’s majority Bosniak Muslim population by referring to them as ‘converts’ and a ‘servile nation’. With the support of Serbia and Russia, Dodik is currently in the midst of breaking up Bosnia and Herzegovina and creating a pro-Russian Abkhazia-like state that would border two NATO member states, Croatia and Montenegro. Russia’s efforts to destabilise the region have been helped immeasurably by the EU’s weak response.

Dodik has made the most of rising Islamophobia in Europe, a faltering EU enlargement process and a disinterested US

Hungary’s prime minister has thrown his full support behind Dodik, calling him a democratically elected politician and warning Western powers that the ‘exorcism of Dodik’ would be dangerous. Recently, Orbán invited Dodik to attend the fourth Demographic Summit in Budapest, an event that has turned into an annual party for illiberal leaders and far-right politicians from both sides of the Atlantic, including former US Vice President Mike Pence. During the summit, Dodik claimed that ‘Muslims will never abandon their values, and that is why I call upon all of us to defend Europe’.

So close are Orbán and Dodik that when the EU recently began pondering imposing sanctions on Dodik for tearing up the Dayton Peace Agreement, Budapest promised it would veto any proposal to impose sanctions and instead announced it would provide €100 million in assistance to Dodik’s government.

Orbán has another means of political leverage over the Balkans, this time through Brussels, in the form of fellow Hungarian Olivér Várhelyi, who is none other than the EU’s Commissioner for Enlargement, and who, according to leaked documents, seems to be colluding with the secessionist Serb leader behind closed doors.

Dodik plays a smart game. He has made the most of rising Islamophobia in Europe, a faltering EU enlargement process and a disinterested US. That is why he is aligning himself with right-wing populists who are on the rise, such as Orbán, Slovenia’s Janez Janša, the Austrian Freedom Party’s Heinz Christian Strache, France’s Marine Le Pen and Donald Trump’s former strategist Steve Bannon. In turn, far-right nationalist parties have a common front with Serb nationalists in the Balkans. In Austria, the Austrian Freedom Party has been at the forefront of rejecting Kosovo’s independence and advocating the dissolution of Bosnia and Herzegovina. The German far right has also been building ties with both Croatian and Serb nationalists.

Orbán and Dodik’s political views converge on a number of points.

First and foremost, they are both obsessed with identity politics and the purity of their nations, and reject the supremacy of higher decision-making bodies. Europe’s far-right parties have rejoiced at the UK’s vote to leave the EU, hailing it as a victory for their own anti-EU stances. Taking inspiration from the UK leaving the EU, Dodik coined ‘RS-EXIT’ as a portmanteau for the Republic of Srpska (‘RS’ for short) breaking away from Bosnia and Herzegovina. Far-right European parties very much support the Republic of Srpska in achieving its political goals.

Second, they both perceive the continent’s Muslims as a demographic time bomb and would rather see a far smaller number of Muslims living in their respective countries. As Bosnian political scientist Jasmin Mujanović cleverly concluded, ‘The essence of Mladić’s project is known to the contemporary, Western far right as the “Great Replacement” theory: the idea that Muslims are waging demographic warfare against white, Christian Europeans, seeking to outbreed and replace them and their civilization’. Serb nationalists portray their irredentist wars and genocide of Muslim Bosniaks in the 1990s as the defence of Europe against ‘Muslim hordes’ bent on establishing an ‘Islamic state’. European far-right parties, likewise, see themselves as part of the same Christian bulwark against Islamic invaders.

Finally, they both rewrite or even whitewash history at the expense of the facts as pertaining to the Jewish Holocaust and the genocide of Bosniak Muslims. At the same time, they glorify Serb war criminals such as Ratko Mladić and Radovan Karadžić, both of whom have become a staple in their discourse. The perpetrators of both the Christchurch mosque shooting in New Zealand that killed 51 people and the Utoya killings that left 77 dead in Norway explicitly cited Serb nationalist leaders as their role models.

These new geopolitical constellations make it easier for Balkan nationalists to hide their irredentist aspirations towards Bosnia’s territory and their animosity towards Muslim Bosniaks behind the banner of fighting a mutual and insidious enemy alongside the European far right. To be clear, what Milorad Dodik is advocating today is no different from what génocidaires such as Radovan Karadžić and Ratko Mladić fought for some 30 years ago. This time, they have rising Islamophobia and a resurgence of fascism on their side, and all this comes at the expense of Bosniak Muslims, as it makes it easier for Dodik to pursue his hostile secessionist ambitions, while facing no repercussions.

Dr Harun Karčić is a journalist and political analyst covering the Balkans, with more than a decade of reporting from the region. Most of his work focuses on foreign influences in the Balkans, Islam and regional politics.

Headline photo: Hungary’s Prime Minister Viktor Orbán holding a copy of The Strange Death of Europe by Douglas Murray. A map of Bosnia and Herzegovina can be seen in the background. Courtesy of Facebook / Viktor Orbán