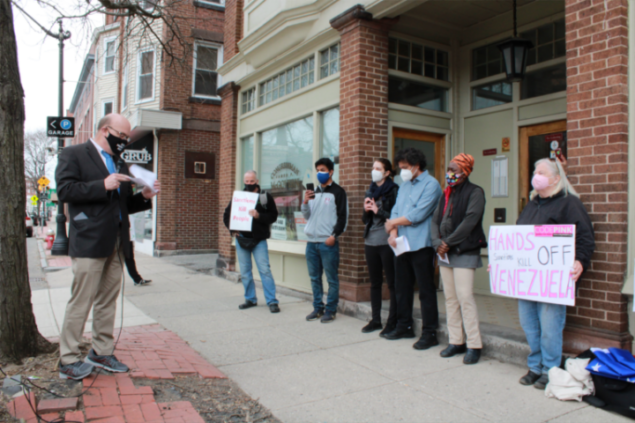 On a cold winter day in February 2019, activists gathered in downtown Northampton, Massachusetts, to denounce the attempted U.S.-backed coup in Venezuela. More than two years later, in the wake of ongoing rallies and discussions with Democratic Rep. Jim McGovern of Massachusetts, activists gained some ground as the congressman tweeted an open letter to President Joe Biden on June 14 in which he called on the president to end “all secondary and sectoral sanctions” against Venezuela.

On a cold winter day in February 2019, activists gathered in downtown Northampton, Massachusetts, to denounce the attempted U.S.-backed coup in Venezuela. More than two years later, in the wake of ongoing rallies and discussions with Democratic Rep. Jim McGovern of Massachusetts, activists gained some ground as the congressman tweeted an open letter to President Joe Biden on June 14 in which he called on the president to end “all secondary and sectoral sanctions” against Venezuela. The letter stated:

“While U.S. officials debate the sanctions policy in Washington, for people in Venezuela the ongoing crisis is a life-and-death matter. … I have never believed that sanctions should be used to punish whole populations for the actions of their leaders or to bludgeon an adversary into submission. … I believe it is time for a course correction on U.S. policy toward Venezuela. It is time to stop using the well-being of the Venezuelan people as a bargaining chip. Your administration must find other ways to pursue its foreign policy goals.”

These sanctions killed more than 40,000 people from 2017 to 2018 alone and put at least 300,000 others at risk of dying because they could not access essential medicines for over a year for treatable conditions such as diabetes, cancer, HIV, and kidney disease. In 2018, the Venezuelan Pharmaceutical Federation reported 85 percent shortages of medicine (compared to 55 percent in 2014). During the pandemic, the situation has only become more dire despite the country’s robust measures to break the chain of infection.

As activists pointed out in meetings and rallies at Rep. McGovern’s office, it is widely recognized that U.S. sanctions are a violation of the standards of the Geneva Convention (1949) and a crime against humanity as defined by the United Nations International Law Commission (1947).

Rep. McGovern’s Twitter feed is already alive with debate over his letter, with people both thanking him for his bold stance and attacking him with a list of unfounded accusations, among them being out of touch with his constituents. But his stance on the sanctions came from his constituents and local activists, including Venezuelan American citizens.

On March 24, 2021, Rep. McGovern joined constituents at a rally held outside his Northampton office organized by a coalition of local organizations to call for all sanctions to be lifted, among other demands. In the words of Héctor Figarella, a local Venezuelan American activist, member of the Anti-Imperialist Action Committee and Latin America Solidarity Coalition, and speaker at the rally:

“Sanctions have become a new type of warfare: a very cruel, inhumane, and immoral kind of warfare that our government, the United States government, is currently engaging [in] across the globe. … You no longer have to drop bombs to kill people; that’s no longer necessary. That’s what we call a hybrid war. Its purpose is to demoralize, starve, [and] kill the local population; to subjugate it, to create regime change. … Venezuela only wants to be respected, to determine their own path… without foreign intervention… without economic sabotage, and to choose their own leader.”

Figarella, who migrated to the United States in 1989, has felt the direct impact of the sanctions. He watched his family’s situation improve under former Venezuelan President Hugo Chávez’s administration (1999-2013) and has watched them suffer under the weight of the U.S. sanctions, from President Barack Obama’s 2015 executive order to the even more severe sanctions policies imposed by the Trump administration, which have continued under the Biden administration. “Sanctions imposed by the U.S. government on Venezuela killed my father. Because he couldn’t find anticoagulants, he developed blood clots that led to his death,” he told the crowd, a story that he has repeated many times in meetings and rallies over the years. “[That is] something you could easily walk up to a CVS and get right here. Sanctions killed my uncle because the medications that he needed to save his life could not be imported because of the killer sanctions. My family’s story is not unique. … Every day, people die as a consequence of U.S.-imposed sanctions.”

On June 21—the same day that Figarella and other activists met with Rep. McGovern’s office to thank the congressman and discuss next steps to gain support for his June 14 letter, and exactly two weeks after Venezuela was blocked from purchasing COVID-19 vaccines as a result of the sanctions on June 7—Figarella’s aunt died from COVID-19 in Ciudad Bolívar, Venezuela.

Rep. McGovern has a long history of standing on the side of human rights, from opposing the brutal state violence in El Salvador in the 1980s to fighting hunger in the United States to condemning the 2019 coup in Bolivia—also at the behest of his constituents—to, most recently, standing against the genocidal blanket sanctions in Venezuela. Though activists in his district insist that all sanctions must be lifted, that U.S. refiner Citgo Petroleum Corporation’s assets must be returned to the Venezuelan state-owned oil company Petróleos de Venezuela SA, and that the U.S. must cease recognition of so-called interim President Juan Guaidó, the congressman’s call to lift the broad and most brutal sanctions is nonetheless a tremendous step forward for human rights. “Venezuela has an oil- and import-dependent economy, and even targeted sanctions limit the government’s ability to purchase necessary goods for the general population,” organizers wrote in a letter to Rep. McGovern on March 19.

After hearing activists’ stories, demands, and perspectives at the March 24 rally, the congressman told the crowd:

“The bottom line is I think we do agree that our policy toward Venezuela [is] one [that] has been harmful to the Venezuelan people; it has resulted in needless death; it has resulted in people not getting the medical supplies that quite frankly can keep them alive. … We have an obligation to speak out about human rights halfway down the block or halfway around the globe, and the bottom line is that there are people in countries all over the world, there are people in this country, who are counting on you, who are counting on me and others, to not be silent when they get oppressed.”

As Rep. McGovern indicated, further action is unlikely to happen without public pressure. “I… want people to understand the value of activism,” he said to the crowd. “I wouldn’t be here today, I wouldn’t be saying [I plan] to raise this with the Biden people tomorrow when I talk to them if you hadn’t come here today.”

On May 28, after two months of reaching out to Rep. McGovern via phone and email, organizers once again rallied at the congressman’s office asking him to come through on his word. On June 14, the congressman released the open letter to Biden (dated May 28). Now it is up to his colleagues and President Biden to follow suit, and up to the public to hold them to their word and to the values they preach.

This article was produced by Globetrotter

Celina della Croce is a coordinator at Tricontinental: Institute for Social Research as well as an organizer, activist, and advocate for social justice. Previously, she worked in the labor movement with the Service Employees International Union and the Fight for $15, organizing for economic, racial, and immigrant justice. 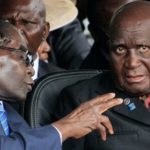 What Western Appraisals of Kenneth Kaunda Left OutAfrica, No voice is lost 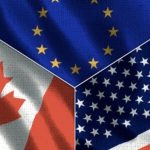