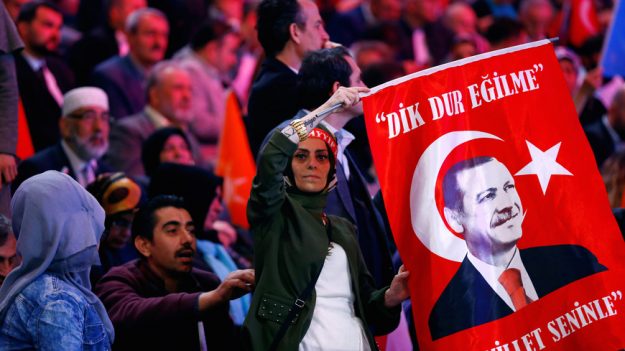 There’s not much time left before what could become Turkey’s most consequential elections. On June 24, about 60 million people are expected to vote in what could lead to a regime change. All candidates, notably President Recep Tayyip Erdogan, have stepped up their campaigns. But the three different “hats” Erdogan wears in his campaign have made Turkey’s civilian-military relations — already strained by the 2016 attempted coup — more fragile.

As Erdogan campaigns across the country, he is representing the commander in chief of the Turkish Armed Forces (TSK) on behalf of the Turkish parliament. He is the president of Turkey, but also a political party leader stumping for re-election. In cities he visits, he is accorded presidential protocol. That being the case, generals serving in those locations are required to attend his campaign events.

On June 2, Erdogan — as the leader of the ruling Justice and Development Party (AKP) — spoke at a dinner at Malatya and targeted Muharrem Ince, the presidential candidate for the Republican People’s Party. Erdogan said, “You can entrust your shop to an apprentice. You cannot entrust Turkey to political apprentices. We can never entrust the country to those who have had no success, no experience in politics. My brothers, there is nothing that those who have lost every contest they entered can give to themselves and to this country.”

Among those gleefully applauding Erdogan for his words about “apprentices” was Lt. Gen. Ismail Metin Temel, the commander of the Second Army, in his full uniform. Photos of the event show Temel making no effort to conceal his grin when applauding Erdogan’s sarcasm about Ince.

Temel, labeled the “warrior general” in the TSK, is known for his stern anti-US/anti-West views. He most recently commanded Operation Olive Branch (January-March 2018), which the TSK carried out with the Free Syrian Army. That explains his popularity with the conservative and nationalist segments of the AKP voter base.

Ince reacted sharply to the photos of Temel smiling at Erdogan’s remarks.

“For the first time in the republic’s history, a general is applauding Erdogan [when he] wasn’t talking about the country, our flag and our nation. Instead, he is applauding Erdogan who was criticizing me,” Ince said at a news conference as he campaigned in Yalova. “He will be the first general I will retire, and [I will] remove his epaulets on Aug. 30,” which is the traditional date for TSK promotions, retirements and assignments.

“Are you a general of the Turkish army or a provincial leader of the AKP?” Ince asked. “All must know their limits, comply with rules, with laws and the constitution. A general cannot do this. I won’t let him do it; you will see.”

In subsequent speeches, Ince ratcheted up his declarations of how he will retire Temel.

This is how Temel’s smile as he applauded Erdogan became one of the most prominent topics of the campaign. Actually, the military’s interference in politics started long before the general’s applause. In April, when it was widely predicted that former President Abdullah Gul might run for the presidency this year, he was visited by Chief of General Staff Hulusi Akar, a childhood friend of Gul’s, and Erdogan’s chief adviser, Ibrahim Kalin, in an effort to dissuade him.

This nighttime visit — via a military helicopter that landed in the backyard of Gul’s Istanbul residence — shows how obscure the line demarcating politics and military bureaucracy has become in post-putsch Turkey.

According to the Internal Service Act — widely considered the TSK gospel — members of the armed forces are forbidden to join political parties or associations, participate in political demonstrations and meetings, give political speeches, make statements or write articles. Even worse, doing any of these things while in uniform is a serious disciplinary offense punishable by one to five years in prison, according to the Military Penal Code.

Since the beginning of the 1900s, Turkish political history has been full of examples of how costly it’s been for the army and the state when the army becomes politicized. Despite the TSK’s occasional involvement in coup attempts, it’s still possible to assert that the TSK maintains robust principles of staying away from daily political polemics and not becoming a subject of such drama. Now, everybody’s arguing about whether Temel’s applause of Erdogan was a political gesture: Should we condone Temel’s applause because Erdogan is commander in chief and the current president, or condemn it because Erdogan was speaking as a leader of a political party running for president?

Pro-AKP journalists and academics emphasize that Temel, who has commanded operations against the Kurdistan Workers Party (PKK) and most recently led Operation Olive Branch, is a national hero, that his applause was perfectly normal and that there are no problems in civilian-military relations. Pro-AKP media constantly note that Temel is now commander of Turkish military operations in Iraq.

The same media are now on a quest to introduce Temel as the officer who will command the pending anti-PKK operation in Iraq’s Qandil Mountains. They criticize the opposition’s presidential candidate, Ince, for demanding Temel’s dishonorable discharge. Columnist Taha Akyol of the daily Hurriyet (which was recently bought by a pro-AKP media baron) wrote that Temel must show more care in the future.

The opposition stresses that the military cannot work to ensure a political party’s success and insists that Erdogan’s speech was election propaganda and not about national defense or any related military subject. Opposition leaders also ask what would have happened if another general had attended, in uniform, a dinner honoring Ince.

What’s obvious is that in the time left before the elections, civilian-military relations will be a key polemical issue in the country’s increasingly heated politics. These debates will drag soldiers into political quarrels and weaken the relations, despite efforts to repair them since the 2016 failed military uprising.

Do these developments indicate the TSK has become the army of Erdogan? It might be too early to say, but the June 24 elections may well provide the answer.