How a lawbreaking international coalition failed to overthrow Venezuela’s government 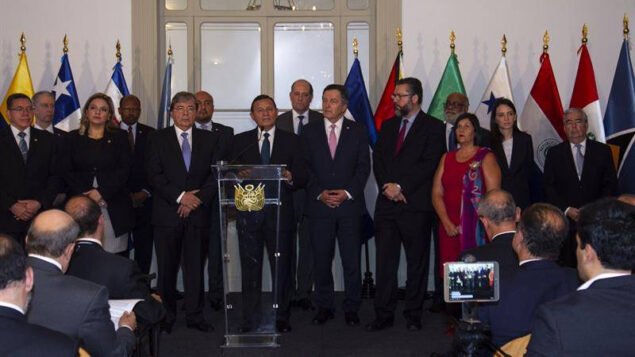 On January 5, the Lima Group called for countries around the world to “disregard” Venezuela’s new elected Legislative Assembly. This is yet another instance of the Lima Group’s diplomatic war which is in violation of UN and OAS charters

By Vijay Prashad and Carlos Ron

On January 5, 2021, the newly elected National Assembly took its seats in Venezuela’s capital. That day, the Lima Group released a statement most of its members signed saying that they did not recognize the legality of the assembly. They called upon countries around the world to “disregard” the assembly and to recognize instead the leadership of a former member of the assembly, Juan Guaidó. The Lima Group felt that it was appropriate for its signatories to call for a “transition process” inside Venezuela; in other words, the Lima Group affirmed its mission, which is to overthrow the government of Venezuela’s President Nicolás Maduro and the Bolivarian Revolution.

What is the Lima Group?

On August 8, 2017, 12 countries in the Americas came together in Lima, Peru, to create this group. Led by Canada, these countries had right-wing governments with a close relationship with the United States of America (from Brazil to Colombia, from Honduras to Paraguay). This group was formed to “contribute to the restoration of democracy” in Venezuela, which meant—in fact—to contribute to the overthrow of the elected government of Venezuela.

The founding declaration made two related points. First, that Venezuela was in the midst of a “critical situation,” which included the “breakdown of the democratic order in Venezuela.” Second, that the remedy for this “breakdown” is the “restoration of democracy,” to be conducted by a “peaceful and negotiated” process.

The problem faced by the Venezuelan people in 2017 was not a deficit of democracy—in fact, the country has had 26 elections since Hugo Chávez came into office in 1999—but the suffocating US illegal sanctions regime against Venezuela. Sanctions are only part of the range of US-imposed hybrid war techniques, which include sabotage and armed insurrection. The Lima Group says that it rejects violence and any option that “involves the use of force.” Since 2017, there have been many conventional attempts to overthrow the government in Venezuela, and in none of these instances has the Lima Group made a statement against the use of force.

The Lima Group represents a key tool in the hybrid war arsenal: diplomatic war. In the years before 2017, the United States did not have a sufficient majority in the Organization of American States (OAS) to use that body to isolate Venezuela; therefore, the US worked with its oligarchic allies in the Americas to form a fake regional bloc with Latin American countries alongside Canada. The United States has hovered at the Lima Group meetings, setting the agenda and driving the policy.

Is the Lima Group legal?

Each of the members of the Lima Group is a member of the United Nations (UN), which means that they have to abide by the UN Charter of 1945. That charter says that “regional arrangements” are perfectly legal and that such arrangements could assist in the “maintenance of international peace and security” (UN Charter, Chapter VIII, Article 52, Paragraph 1). If the Lima Group was set up to further the goals of the UN Charter, there would be no illegality.

Where the Lima Group strays into illegality is when it decides collectively to enforce decisions upon Venezuela, which is a member state of the UN. The UN Charter says explicitly that no “enforcement action” is permitted by a regional arrangement “without the authorization of the Security Council.” The UN Security Council can use these regional bodies to take “enforcement action under its authority”; to do so, however, would require a UN Security Council resolution (UN Charter, Chapter VIII, Article 53, Paragraph 1). There is no UN Security Council resolution that provides the Lima Group with the authority to pressure Venezuela’s government to resign and agree to a transfer of power.

The UN Charter says that it does not authorize its members to “intervene in matters which are essentially within the domestic jurisdiction of any state.” The only exception to this is if there is a UN Security Council resolution under Chapter VII of the UN Charter, which allows such intervention. If there is no such resolution, then the UN member states are obliged to respect the “domestic jurisdiction” of other members. This is the concept of non-interference, violated by the Lima Group in each of its meetings.

The OAS Charter twice takes a position against interference and intervention. First, in the opening sections of the Charter, member states pledge to follow the “principle of non-intervention” (OAS Charter, Chapter I, Article 2, Section b). Second, later in the charter there is a long explanation of non-intervention, which extends beyond military attacks to include a range of interventions:

“No State or group of States has the right to intervene, directly or indirectly, for any reason whatever, in the internal or external affairs of any other State. The foregoing principle prohibits not only armed force but also any other form of interference or attempted threat against the personality of the State or against its political, economic, and cultural elements.” (OAS Charter, Chapter IV, Article 19)

Both the UN Charter and the OAS Charter are clear that any conspiracy to overthrow another member of the UN and the OAS is illegal. There is no other way to understand the actions of the Lima Group than that its members are in breach of its obligations to these two foundational charters.

By the start of this year, the original 12 countries in the Lima Group were joined by five others to make 17. However, for the statement against Venezuela on January 5, there were only 13 signatories (including two non-member countries). Key Lima Group member countries such as Argentina, Bolivia, and Mexico had not signed this statement. Part of the reason is that most of these countries are now governed by left-wing governments who do not believe in the regime change policy against Venezuela. They understand the Lima Group for what it is, namely a conspiracy against the UN Charter.

Since 2017, Peru has lurched through one political crisis after another from corruption cases implicating politicians and overthrowing governments; massive protests, including recently over an agrarian law, have gripped the country in its own democratic convulsions. Peru’s presidents, often charged with corruption, came in and out of office in quick succession, and yet—in a very forced and insincere way—they called for democratic processes in Venezuela; Pablo Pedro Kuczynski—charged with corruption—was out of office seven months after the Lima Group was created, while his successor Martín Vizcarra was impeached for “permanent moral incapacity.” Manuel Arturo Merino who came next lasted for five days before handing over the reins to Francisco Sagasti. Sagasti, whose hold on the presidency is fragile, took time out of the crisis in Peru to attack Venezuela in late December 2020; nonetheless, Peru seems to be losing its appetite for this operation against Venezuela.

More fundamentally committed to regime change in Venezuela are Canada and Colombia, which is why the Lima Group could be more accurately known as the Ottawa Group or the Bogotá Group. Whatever the group is called, there is no doubt that it is—based on the UN and OAS Charters—an illegal conspiracy against Venezuela. The sooner the group is disbanded, the better. Venezuela, with a new National Assembly, is exercising its political sovereignty against the hybrid war attempt to destabilize the country.

Carlos Ron is Venezuela’s vice minister of foreign affairs for North America and president of the Simón Bolívar Institute for Peace and Solidarity Among Peoples.