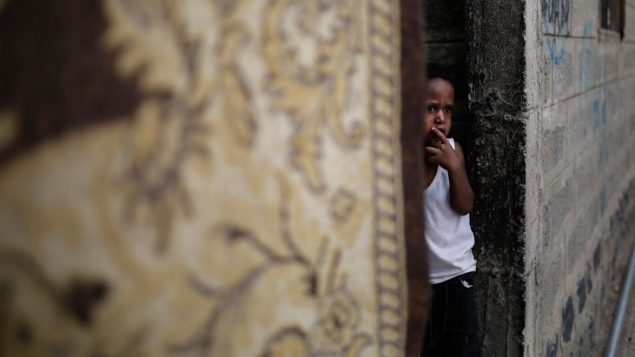 Saudi Arabia has stepped up its seizure and detention of ships carrying food and fuel into Yemen, sparking shortages that experts warn will push the country’s civilians into even more dire straits.

SANA’A, YEMEN — Recent political developments have offered a glimmer of hope to some that the end of the humanitarian crisis in Yemen may be near. But a new report by the United Nations Development Programme shows that a recent tightening of the Saudi-led Coalition’s blockade against the country, and the fuel shortages it has sparked, not only are exacerbating Yemen’s humanitarian crisis but also are slated to make Yemen the world’s poorest country by 2022.

In the nursery at the Maternity and Childhood Hospital in Amran, doctors and families alike fear that fuel shortages will lead to power cuts, plunging the ward into darkness and rendering its life-saving machines inoperable. One mother in the ward diligently watches a heater placed near her infant, knowing that it the electricity-powered medical device stops, her child will die.

Dr. Hadi Al-Hamzi, the director-general of the hospital, said that 30 infants could die if their incubators stop for just two hours. He added, “We have a severe shortage of generator fuel, and we have no prospect of getting more in the coming days.” Mohammed Mujahed, the director of Amran Governorate’s Health Office, warned that intensive care for pregnant mothers and nurseries in the province could be stopped in a matter of hours if no generator fuel is secured.

The Saudi-led Coalition has stepped up its seizure and detention of ships carrying food and fuel into Yemen and the effects of those seizures are already being felt by ordinary people. Thousands of Yemenis already facing acute food shortages could die, as stocks of stored food dwindle and cannot be replenished. Sultana Begum, a representative of the Norwegian Refugee Council humanitarian organization, told Reuters that “fuel shortages in Yemen exacerbate the already dire humanitarian situation in the country and lead to unacceptable levels of suffering.”

For 40 days, the Coalition, led by Saudi Arabia and the United Arab Emirates, has continued to hold 13 ships loaded with oil derivatives at sea, preventing them from entering the port of Hodeida. The UN has already inspected and licensed the ships in compliance with a decision issued by the Saudi-backed Hadi government that requires customs duties to be paid in Aden before ships can discharge in Hodeida.

The seizures are taking place despite a September 20 announcement by the Houthis that they would cease retaliatory attacks against Saudi Arabia in the wake of their attack on a Saudi Aramco oil facility and secret negotiations reportedly taking place between Ansar Allah (the Houthis’ political wing) and Saudi Arabia.

As in other regions, in Sana’a lines as far as the eye can see have become a common sight, as people queue at gas stations hoping to secure fuel. Government-imposed rationing has been enforced and only 40 liters (about 10 gallons) of fuel are allowed per vehicle every six days. Many gas stations have already been forced to close as a result of the shortages, and black-market fuel now costs three times the official price.

Garbage trucks have not been able to operate either, leaving enormous piles of uncollected rubbish littering major cities, including Sana’a, a city already struggling to cope with cholera amid a doubling of its population since the war began.

Fuel and food and health

The impact of the Saudi-led sea blockade has already reached Yemen’s hospitals. Dr. al-Mutwakil, the minister of health based in Sana’a, said operations and intensive care departments in a number of hospitals are about to close owing to the shortage of oil derivatives and the prevention of their access to Hodeida port.

Ministry spokesman Dr. Yousef al-Hadhri said in a statement that more than 120 hospitals, 3,000 health centers, private hospitals, pharmacies, laboratories, and blood banks are at risk of “catastrophe” if the Coalition continues to prevent the arrival of oil derivatives.

Dr. al-Hadhri went on to say:

The number of health facilities in the private sector affected by the shortage of oil derivatives is estimated at 183 hospitals, 165 dispensaries, and 555 medical centers — a total of more than 903 facilities, including private hospitals, which service more than 60 percent of the population.”

Aside from its acute effects on Yemen’s hospitals, the fuel shortage is causing a public health crisis, as spikes in cholera and other waterborne diseases are expected on account of the inability of water filtration systems to operate and trucks to deliver safe drinking water, as well as desalination plants that are unable to operate without fuel. 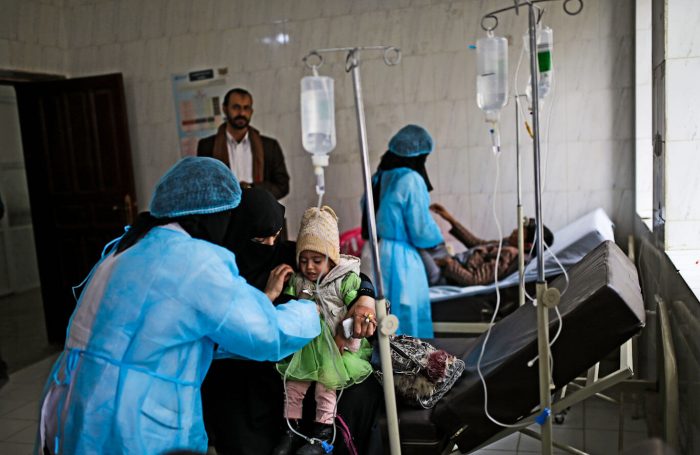 A girl suspected of cholera infection is treated at a hospital in Sana’a, Yemen, Sept. 9, 2019. Hani Mohammed | AP

Fuel is needed not only to power the generators that have been the sole source of electricity for hospitals since a widespread blackout hit in 2015, but also for transportation. Shortages have caused fuel prices to spike up to 200 percent in some areas, making the transportation of life-saving aid to communities-in-need more expensive. Deliveries that used to take one day now take three days, as trucks have to wait for fuel, resulting in major delays in getting food and medicine to the most vulnerable communities.

Save the Children said in a statement in October:

Fuel prices have hiked 100% over the past 40 days as the internationally recognized [Saudi-backed] government imposed customs duties in the interim capital Aden. That caused a 60% decrease in the amount of fuel coming through the key port of Hodeida.”

The group explained that the resulting health crisis has led to a mounting risk of more cases of cholera and other waterborne diseases.

Hundreds of thousands of children and their families are already stricken by Yemen’s five-year-long humanitarian crisis. Save the Children Director Tamer Kirolos, said that the fuel crisis is already impacting Save the Children’s humanitarian operations, as they rely heavily on fuel availability to transport aid to the facilities they support.

The public-health crisis gripping Yemen has grown steadily worse since the war began. As it enters its fifth year, Yemen now has the fastest growing outbreak of cholera ever recorded. Swine flu, rabies, diphtheria, and measles have also emerged in the country; and all of this while Yemen is in the midst of the world’s worst famine. Nearly 18 million people do not have enough food to eat, and the malnourished are even more susceptible to disease. Vaccines used to prevent the further spread of the myriad diseases gripping Yemen are also at risk, as the specialized storage facilities used to maintain the specific temperatures needed to assure their effectiveness go without electricity.

Tip of the iceberg

The Houthis have responded to the blockade by warning Saudi Arabia that the recent attacks on the Saudi Aramco oil facility were merely the tip of the iceberg and that if Saudi Arabia does not lift its siege on Yemen, it will be the target of more violent attacks. A Houthi military source told MintPress that large-scale operations were already being prepared in case the blockade is not lifted.

A fresh wave of demonstrations has taken place almost daily across Yemen since the blockade began, the largest in Hodeida and in front of the United Nations office in Sana’a. Protesters are calling for Saudi Arabia to lift its restrictions on fuel and are encouraging the Houthis to carry out more painful retaliatory attacks against the Kingdom if the blockade remains in place. Some protesters could be heard shouting slogans that the world ignores their suffering, yet sheds tears when Saudi oil facilities are targeted.

Yemen’s Houthi-allied Army has announced that it considers the blockade a violation of conditions for peace talks and that Saudi Arabia and the UAE face military strikes deep inside their territory if they do not lift the siege, which they said has already lead to the deaths of Yemeni civilians.

Speaking at a press conference in the capital Sana’a on Tuesday afternoon, Houthi spokesman Brigadier General Yahya Saree said potential upcoming “military operations aim to alleviate the suffering of the Yemeni people and defend them. He added that the blockade confirms that Saudi Arabia has no real intention to pursue peace.

Negotiations between Ansar Allah, the political wing of the Houthis, and Saudi Arabia — led by Saudi Deputy Defense Minister Prince Khalid bin Salman and Abu Dhabi Crown Prince Sheikh Mohammed bin Zayed al-Nahyan — are reportedly ongoing following an offer for a truce by Ansar Allah, but many Yemenis are not optimistic that peace talks will end the war.

Numerous negotiations between Ansar Allah and Saudi Arabia have failed, including UN-brokered peace talks in Switzerland last year. Previous talks also broke down in 2016, when 108 days of negotiations in Kuwait failed to yield a deal and separate talks that same year in Dhahran between the Houthis and Saudi Arabia also failed.

The war on Yemen began in March 2015 and has taken a heavy toll on the country’s infrastructure — destroying hospitals, schools, and factories. The UN has said that a record 22.2 million Yemenis are in dire need of food, including 8.4 million threatened immediately by severe hunger. According to the world body, Yemen is suffering from the most severe famine in over 100 years, leaving many Yemenis to believe that attacks on Saudi Arabia are the last hope to stop the war and lift the blockade on their country.

Ahmed AbdulKareem is a Yemeni journalist. He covers the war in Yemen for MintPress News as well as local Yemeni media.