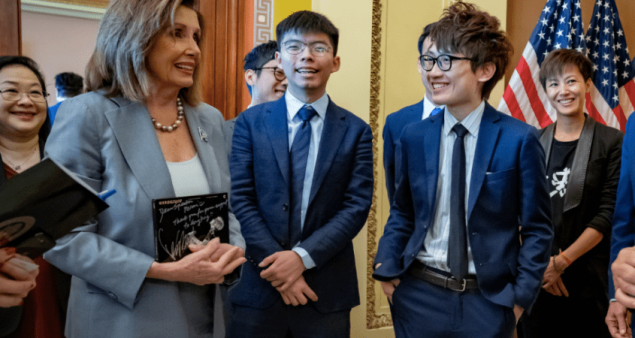 While claiming to fight for “self-determination,” Hong Kong opposition leaders are collaborating with regime-change neoconservatives in Washington to “preserve the US’s own political and economic interests.” A new DC lobbying front has become their base of operations.

The U.S. Senate unanimously passed the Hong Kong Human Rights and Democracy Act on November 19, without any opposition. Despite loudly proclaiming to protect “human rights” and “democracy,” a closer look at this legislation reveals the imperial agenda underlying Washington’s actions in Hong Kong.

Behind its humanitarian cloak, the Senate bill advances the threat of economic sanctions in order to impose Washington’s foreign policy interests on China and the region, while turning up the heat on North Korea and Iran. At the same time, the bill pledges to “safeguard United States businesses in Hong Kong.”

The legislation is a long-term project of neoconservatives and leading Hong Kong opposition activists like Joshua Wong, a protest poster boy who has been present in meetings in Washington to develop the sanctions legislation since November 2016.

In fact, the act was passed in the immediate wake of a lobbying junket to the U.S. by prominent Hong Kong opposition figures, including Wong.

The September visit highlighted the opposition’s close bond with Washington, as the National Endowment for Democracy (NED) – the engine of the U.S. regime change machine – recruited Hong Kong opposition leaders onto the board of a new DC-based anti-China front called the Hong Kong Democracy Council (HKDC).

While claiming to be struggling for Hong Kong’s “self-determination,” the opposition is openly coordinating with Washington, and aiming at nothing less than surrendering Hong Kong to the U.S.’s geo-strategic agenda. 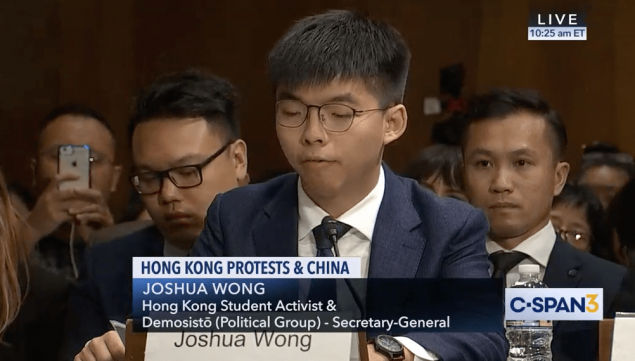 Joshua Wong testifies before Congress in support of the Hong Kong Human Rights and Democracy Act on September 17, 2019

As part of an international tour to build support for the Hong Kong protests, Wong and several prominent opposition figures traveled to Washington in September to lobby Congress to “take action” against China.

As Dan Cohen reported for The Grayzone, Wong has been previously “trumpeted in Western media as a ‘freedom campaigner,’ promoted to the English-speaking world through his own Netflix documentary, and rewarded with the backing of the U.S. government.”

Testifying on Capitol Hill before the Congressional-Executive Commission on China (CECC), headed by neoconservative Senator Marco Rubio, Wong and others lobbied U.S. lawmakers to pass the Hong Kong Human Rights and Democracy Act.

The legislation would amend the Hong Kong Policy Act of 1992, which governs U.S. relations with Hong Kong. The new act would direct the U.S. government to regularly assess and certify “whether Hong Kong is sufficiently autonomous from China”.

Yet according to the act, the question of Hong Kong’s autonomy appears to directly correspond to how closely the city toes the line of Washington’s foreign policy agenda.

First, the bill requires the U.S. government to closely scrutinize whether Hong Kong “enforce[s] sanctions imposed by the United States” against North Korea and Iran in particular, along with any other country that Washington deems “present a threat to the national security, foreign policy, or economy of the United States.”

If the U.S. government finds that such “fundamental freedoms and autonomy in Hong Kong” are being undermined  — i.e., that Hong Kong is not sufficiently advancing the interests of U.S. foreign policy, in terms of sanctions against Officially Designated Enemies and the Trump administration’s trade war with China — the new act provides legal justification for the U.S. to impose sanctions on China.

By working with Washington to pressure Hong Kong into aligning with U.S. foreign policy or face an escalation in economic warfare, the opposition has discredited it own claims to be fighting for “autonomy,” or “self-determination.”

Indeed, its willingness to sacrifice the city’s independence to Washington’s imperial interests in the region has been laid bare.

Hong Kong opposition lobbyists have worked with Washington to “strengthen the bill” by removing the requirement that protesters be “peaceful” in order to apply for U.S. visas without obstruction. This provision makes it abundantly easier for violent protesters to flee to the U.S.

Sunny Cheung, an opposition activist who testified before Congress alongside Wong, cheerfully declared that “this strengthened version [of the U.S. congressional bill was] the achievement of Hong Kong’s various lobbying groups.”

Around 30 young protesters sit in one corner of the Polytechnic University campus in Hung Hom, manufacturing petrol bombs while others cart them away to the frontline.

In recent weeks, Hong Kong protesters have murdered a 70-year old street cleaner with a brick, and attempted to kill another resident who disagreed with them by setting him on fire.

Shocking photos sent to CNN from inside PolyU campus show gas canister covered in bolts. Unclear if the canister has any fuel inside or could be detonated. Police spox told CNN they are aware of gas canisters being used as weapons against them. https://t.co/VRzNn4BMAx pic.twitter.com/0xqUXhO0Gi

By offering impunity to those who commit such extreme violence, Hong Kong opposition lobbyists and the U.S. government have signaled their tacit approval of these ghastly acts and many more to come. 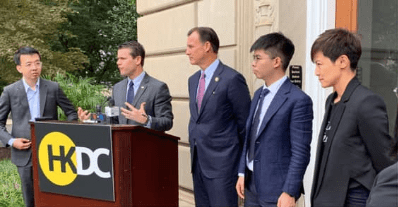 The opposition’s symbiotic relationship with Washington was further underscored by the establishment of a brand new Hong Kong lobbying organization in Washington.

The Hong Kong Democracy Council has brought leading Hong Kong activists together with prominent members of Washington’s foreign policy establishment with the aim of “pushing the US to uphold its commitment to Hong Kong’s basic freedoms and autonomy and to preserve the US’s own political and economic interests in Hong Kong.”

This nakedly imperialist language further highlights how far the Hong Kong opposition has strayed from its stated mission to preserve “autonomy” and “self-governance.”

HKDC was launched on September 16, 2019, with Wong and other Hong Kong opposition figures attending the opening reception.

The organization features a number of prominent Hong Kong activists as board members. These include:

In addition, the advisory board features leading movement figures such as:

HKDC communications director Samuel Chu did not respond to an emailed request for comment.

The majority of HKDC’s advisory board is made up of members of the NED, the Open Society Foundations of anti-communist billionaire George Soros, the Council on Foreign Relations, and Freedom House.

The tight coordination between the Hong Kong opposition and the regime change-obsessed U.S. foreign policy establishment is now undeniable.

Far from righteous freedom fighters struggling for “self-determination,” leaders of the Hong Kong opposition have mobilized behind a singular goal of handing over their city to Washington’s imperial agenda.

Ajit Singh is a writer and lawyer, based in Canada.