Hong Kong and the Audacity of the United States 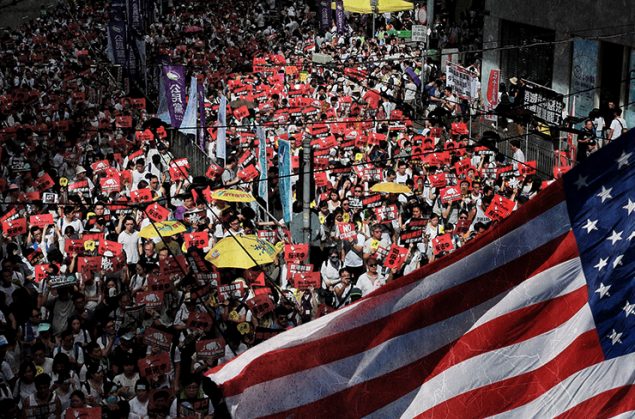 The French Yellow Vests know what they are fighting for. The Hong Kong protesters, most of them, follow a few leaders under false pretenses against their country, against Beijing. Granted, many of the protesters are pro-westerners, they sing the US National Anthem, and wave the British flag – the flag of their former colonialists.

People often ask and hint at the similarities between the Hong Kong protests and the French Yellow Vests. The former started on 31 March and are approaching their 19th week – the Yellow Vests (YV) have celebrated last weekend their 40th week of protests. As of recently some voices of Macron-infiltrates into the YV movement – or Fifth Columnists – have suggested that the YVs may support the Hong Kong protesters in solidarity for freedom…

Well, that didn’t go down well with the highly educated and well informed YV. Many of them actually felt insulted by the Macronites – ‘for whom does this guy [Macron] take us?’ – And right they are. There is not a shred of comparison between the two movements, except that they are protests – but for widely different reasons, and serving widely different agendas. The YV can in no way be associated with the Hong Kong “protests” – which are equal to US funded Color Revolutions.

We, the YV leaders said, are fighting against an ever more totalitarian French government that is ever more stealing our legitimate income in the form of all sorts of taxes and keeps a minimum wage on which ever-more French families cannot survive. Life is unaffordable on a regular workers pension. The Macron Government is creating poverty, by shifting the financial resources – the few that are left, from the bottom to the top. – That’s what we are fighting and protesting against. We want a fundamental change in the French economic structure and the French leadership. You see, all of this has nothing to do with the Washington funded Hong Protests that are directed on Washington’s behalf by Hong Kongers against the Government of Mainland China.

It couldn’t be clearer. The French Yellow Vests know what they are fighting for. The Hong Kong protesters, most of them, follow a few leaders under false pretenses against their country, against Beijing. Granted, many of the protesters are pro-westerners, they sing the US National Anthem, and wave the British flag – the flag of their former colonialists.

Washington pours millions into creating unrest in Hong Kong, similarly as in Ukraine, when the US State Department financed the preparation of the 2014 coup at least 5 years ahead at the tune of US$ 5 billion, according to Victoria Nuland’s, Deputy Secretary of State, own admission, directly and through NED, the National Endowment for Democracy, an “NGO” which it isn’t. It is rather the extended or soft arm of the CIA, receiving hundreds of millions of dollars from the State Department for their ‘regime changing’ activities around the globe.

In 1991, The Washington Post quoted a NED founder, Allen Weinstein, as saying “a lot of what we do today was done covertly 25 years ago by the CIA”. – Couldn’t have been said better. We see the results all over the world.

Precisely this has happened in Hong Kong and is going on until this day – and probably way beyond. The US will not let go. Especially now that most people who have at least a limited understanding on how these western manipulations work, comprehend and see for themselves who is sowing the unrests. Take the 22-year-old student and western hero of the 2014 Umbrella Revolution, Joshua Wong,trained programmed and funded by the US State Department / NED / CIA. He is again a main player in the current protest movement. Wong is the on-the-ground boy for the local media tycoon, Jimmy Lai, who has spent millions of his own money in the 2014 “Occupy Central” protests (Umbrella Revolution).

The oligarch uses his funds widely to finance protest leaders and protest groups. He also created his own National Party, with significant xenophobic connotations. Yet Mr. Lai is very close to the Trump Administration and met, along with many of his protest leaders, with the US envoy in Hong Kong, as well as with National Security Advisor John Bolton – and other US officials. On July 8, Mr. Jimmy Lai met US Vice President Mike Pence at the White House.

Lai has full support of the US Government to fire-on and promote these protest groups. Yet, if asked, the protesters have no precise plan or strategy of what they want. The island is largely divided. By far not all protesters want to separate from the mainland. They feel Chinese and express their disgust with Jimmy Lai’s radical anti-Beijing propaganda. They call him a traitor.

Mr. Lai was born in 1948 in mainland China, in an impoverished family in Canton. He was educated to fifth grade level and smuggled to Hong Kong in a small boat at age 13. In HK he worked as a child laborer in a garment factory at about the equivalent of US$ 8 per month. In 1975 he bought a bankrupt garment factory for a pittance and created Giordano, producing sweaters and other clothing for mostly US clients, like J.C. Penny, Montgomery Ward and others. Mr. Lai today is openly criticized even by his own people as a conspirator behind the violence of the HK riots, or protests, as he prefers to call them.

The protests started with a ‘controversial’ extradition law – which, by the way, exists between most States in the United States, as well as between nations in Europe and to a large extent internationally. Therefore, this is nothing unusual. Yet, its importance was blown out of proportion by the western media and by Mr. Lai’s own local media to distort the picture. A minority, of course, would like their full independence from China which is totally against the agreement signed between the UK and Beijing at the so-called 1997 Handover.

A few days ago, the US sent a couple of war ships into China waters at Hong Kong. They had the audacity to ask Beijing to grant them the right to dock at Hong Kong harbor. Beijing, of course, refused and warned Washington – do not meddle in our internal affairs. Of course, Washington has no intention to heed China’s advice – they never do. They have been inoculated with the view that the exceptional nation calls the shots. Always. Nobody else should even dare to contradict them. Period.

On July 3, The China Daily pointedly reported “The ideologues in Western governments never cease in their efforts to engineer unrest against governments that are not to their liking, even though their actions have caused misery and chaos in country after country in Latin America, Africa, the Middle East and Asia. Now they are trying the same trick in China.”

The US tactics in Hong Kong, may be combined with Trump’s trade war, with the Pentagon’s greater presence – mainly new military bases and navy presence in the Indo-Pacific region – Obama’s (in)famous Pivot to Asia which prompted Obama to order 60% of the US Navy fleet to the South China Sea.

All of this and more are part of a destabilization war with China. Washington is afraid of China’s rising economic power in the world, of China’s monetary system, that is based on economic output and on gold, not fiat money like the US Dollar and the Euro and other currencies following the western turbo-capitalist system; and Washington is afraid of losing its dollar hegemony, as the Chinese yuan is gradually taking over the dollar’s role as world reserve currency.

Hong Kong was basically stolen by the Brits in 1842 at the heights of the Opium Wars. Under pressure of the British military might, China ceded Hong Kong under the Treaty of Nanking, signed on 29 August 1842. Hong Kong became, thus, a Crown Colony of the British Empire. In 1898, Hong Kong’s Governor Chris Patten and Prince Charles agreed on a 99-year lease and pledged to return Hong Kong to China in 1997.

After 155 years of British colonial oppression of the people of Hong Kong, it was time to normalize the status of Hong Kong as what it always should have been, namely an integral territory of China. The “One Country, Two Systems” agreement of 1997, returned Hong Kong to the People’s Republic of China, but the parties agreed to leave the capitalist system in place for 50 years. The agreement also stipulated that all intervention and colonial claims on Hong Kong were supposed to end. Full sovereignty was to return to China. What’s happening now – US-UK fomented riots to seek independence of the island, is in total disregard of the 1997 Handover Treaty.

The US inspired and funded protests are destined to challenge the HK-China sovereignty clause, by mobilizing public opinion that wants full “freedom” – i.e. independence from China.

The 50 years of the usual abusive capitalist continuation, would allow the imperialist US and UK to maintain economic control over Hong Kong and thereby exert economic influence over the PRC. How wrong they were! – In 1997 Hong Kong’s GDP constituted 27% of the PRC’s GDP – today that proportion shrunk to a mere 3%. China’s rapidly growing level of development, especially the Belt and Road Initiative (BRI), which the west chose to literally ignore until about a year ago, has become a vital threat to the US corporate world.

What the US and UK – and the rest of the West – is particularly interested in is HK’s special banking position in the world. Through Singapore and Hong Kong, Wall Street and key European banks, in cohorts with their not so ‘ethically-clean’ and often fraudulent HSBC partner, pretend to control and influence Asian economics – and especially attempt to prevent China to take over the Asian financial markets. Hong Kong has the most liberal banking laws, possibly worldwide, where illegal money transactions, money laundering, shady investments in the billions can be carried out and nobody watches. Maintaining HK as long as possible with this special nation status and wielding influence and control over PRC’s financial markets is one of the western goals.

But little does the West understand that China and other eastern countries, plus Russia, India, Pakistan, have already largely detached, or are in the process of detaching from the dollar economy and are members of the Shanghai Cooperation Organization (SCO). Let’s face it, the SCO comprises about half of the world’s population and controls about one third of the globe’s economic output.

Therefore, the SCO members do no longer depend on the western financial markets and monetary manipulations. In fact, Shanghai has in the last decades grown to become China’s financial hub with way more importance for China than Hong Kong. So, it is very unlikely that China will crack down on Hong Kong for the protests. There is too much political capital to be lost by interfering. The West and Hong Kong protesters may as well riot themselves into rot.

But if China gets tired of these incessant western provocations and really wants to put an end to them, the PRC could take over Hong Kong in less than 48 hours, abridge the 50 years of western capitalism and make HK a full-fledged province of China, no privileges, no special status, just a part of sovereign China. End of story.

Peter Koenig is an economist and geopolitical analyst. After working for over 30 years with the World Bank he penned Implosion, an economic thriller, based on his first-hand experience. Exclusively for the online magazine “New Eastern Outlook.”