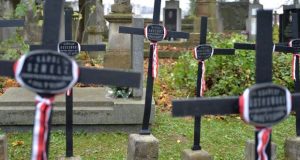 Polish graves at the Lychakiv Cemetery in Lviv, Ukraine. Lviv was a Polish city until 1939 (photo by Darek Delmanowicz, EPA, in Irish Times)

Poland and Ukraine have clashed again over their second World War history, a period of bloody and disputed events that threatens to poison a key eastern alliance against a belligerent Russia.

Ukraine’s 2014 revolution and subsequent conflict with Moscow, and the election of the populist Law and Justice party in Poland in 2015, stirred nationalism in both countries and recrimination over how they treat the grim legacy of the 1940s.

Warsaw accuses Kiev of glorifying far-right fighters who killed tens of thousands of Poles in what is now western Ukraine, and failing to prevent the desecration of cemeteries where victims are buried and monuments to their memory.

Ukraine accepts that wartime pro-independence militia committed atrocities but rejects Warsaw’s claim that they amount to genocide, and says Poland has done nothing to halt vandalism at Ukrainian burial places and memorials on its territory.

Polish foreign minister Witold Waszczykowski said his government would “launch procedures that will not allow people who hold extreme anti-Polish positions to come to Poland”.

“We are aware of just how important Ukraine is to us for geopolitical reasons,” he added.

“But the Ukrainians, aware of their country’s significance for our security, believe that issues that divide us, especially historical ones, should be relegated to the second or even third tier in terms of importance.”

Mr Waszczykowski did not explain how the new procedures would work, but said Poland would bar “people who dress up in SS Galician uniforms”, referring to a Nazi unit formed in the eponymous region of Ukraine that was made up mostly of local men.

Jan Zaryn, a senator for Poland’s ruling party, went further by saying: “Ukraine does not want to belong to Roman civilisation. It is behaving like a barbarian in questions of historical memory.”

Volodymyr Viatrovych, the head of Kiev’s institute of national memory, said that in the last three years four Polish monuments in Ukraine were vandalised and all had been restored, while crosses in Ukrainian cemeteries in Poland were damaged 14 times and not repaired.

“In general, this reminds me a bit of our eastern neighbour [Russia] that sees itself as the third Rome. I fear that a few politicians have already appeared in Poland who see it as the fourth Rome,” he said.

Amid the mutual criticism, Ukrainian and Polish officials have called the attacks on monuments and cemeteries part of Russia’s efforts to undermine their relations.

[This is a sympathetic description of how the U.S., UK and Canada military training mission in Ukraine is aiding the armed forces and neo-Nazi paramiliaries of that country, written by the same Irish Times writer as the article above.] 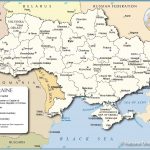 More drumbeat for Western military intervention into Ukraine under the guise of ‘peacekeeping’Roger Annis, Ukraine