The U.S. political/media establishment only permits the propaganda version of the Syrian conflict – and Hillary Clinton fully embraced it in her belligerent comments in the second presidential debate. 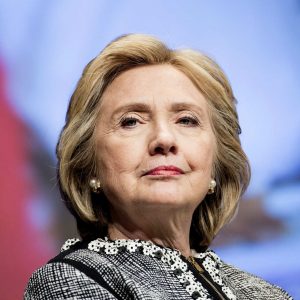 In case there was still any uncertainty, Hillary Clinton banished all doubt in her second debate with Donald Trump on October 9. A vote for her is a vote not only for war, but for war on behalf of Al Qaeda.

This is clear from her response to ABC reporter Martha Raddatz’s painfully loaded question about the Syrian conflict. With Raddatz going on about the hundreds killed by the evil twins, Bashar al-Assad and Putin and even tossing in the Holocaust for good measure, Clinton saw no reason to hold back:

Well, the situation in Syria is catastrophic and every day that goes by we see the results of the regime – by Assad in partnership with the Iranians on the ground, the Russians in the air – bombarding places, in particular Aleppo where there are hundreds of thousands of people, probably about 250,000 still left, and there is a determined effort by the Russian air force to destroy Aleppo in order to eliminate the last of the Syrian rebels who are really holding out against the Assad regime.

Russia hasn’t paid any attention to ISIS. They’re interested in keeping Assad in power. So I, when I was secretary of state, advocated, and I advocate today, a no-fly-zone and safe zones. …  But I want to emphasize that what is at stake here is the ambitions and the aggressiveness of Russia. Russia has decided that it’s all in in Syria, and they’ve also decided who they want to see become president of the United States too, and it’s not me.  I stood up to Russia, I’ve taken on Putin and others, and I would do that as president.

It was an astonishing performance, even for a presidential debate. Rarely have more lies and misstatements been crammed into a single two-minute statement. 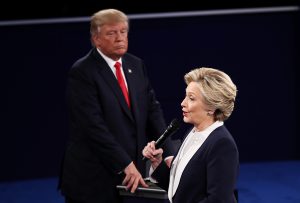 Where to begin? For starters, there are not 250,000 people in Aleppo, but somewhere around 1.75 million, only a small portion of whom live in a rebel-controlled enclave in the city’s east. Despite Clinton’s claim that Russia is trying to “destroy Aleppo,” most of the city manages to carry on quite peacefully despite rebel “hell cannons” lobbing explosive-packed gas canisters into government-controlled areas at regular intervals.

“One of the most striking things about Aleppo,” New York Times reporter Declan Walsh wrote last May, “is how much of the city appears to be functioning relatively normally. Much of the periphery has been reduced to rubble. But in the city center, I saw people on the sidewalks, traffic flowing, hotels and cafes with plenty of customers, and universities and schools open for students.”

Not so in the rebel-held east, however. Juan Cole described the area as “a bombed-out slum,” a ghost town with a population conceivably as low as “a few tens of thousands.” Life under the rebels is “miserable,” he went on. “Some neighborhoods are controlled by Al-Qaeda, some by the hard line Salafi Jihadi ‘Freemen of Syria’ (Ahrar al-Sham), some by militias of, essentially, the Muslim Brotherhood.”

The truth about the rebels

When Secretary of State John Kerry tried to persuade “moderate” rebel forces to sever ties with Al Nusra during last month’s brief ceasefire, The Wall Street Journal reported that some of the largest factions responded by “doubling down on their alliance” and drawing even closer to Al Qaeda. In other words, they flipped Kerry the bird.

The people Clinton supports are thus the same forces that brought down the World Trade Center 15 years ago, killing nearly 3,000 people and triggering a global war on terror that has allowed Al Qaeda to metastasize across half the globe, including its spinoff group, the Islamic State or ISIS.

The statement that “Russia hasn’t paid any attention to ISIS” was similarly bizarre. When ISIS converged on Palmyra, in central Syria, in May 2015, it was the U.S. that held off bombing even though the ISIS fighters would have made perfect targets as they crossed miles of open desert. Why didn’t the United States attack and possibly keep the antiquities of Palmyra out of ISIS’s hands?

Explained The New York Times: “Any airstrikes against Islamic State militants in and around Palmyra would probably benefit the forces of President Bashar al-Assad. So far, United States-led airstrikes in Syria have largely focused on areas far outside government control, to avoid the perception of aiding a leader whose ouster President Obama has called for.”

In other words, the U.S. allowed ISIS to take one of the richest archeological sites in the Middle East even though it could have stopped it in its tracks. By the same token, it was Russian air strikes – some of the heaviest, in fact, since Moscow entered the war in September 2015 – that enabled Syrian forces to retake the city the following March.

The idea that Russia doesn’t care about ISIS stood reality on its head. Moreover, when U.S. jets killed at least 62 government soldiers outside the ISIS-besieged town of Deir Ezzor last month, ISIS took advantage by launching an offensive just minutes after the bombing had ceased.

So, by holding its fire in the case of Palmyra and unleashing it in the case of Deir Ezzor, Washington – inadvertently or not – enables ISIS to advance and then gets huffy when anyone objects. As U.S. Ambassador to the United Nations Samantha Power declared when Russia dared call an emergency U.N. Security Council meeting in response: “Even by Russia’s standards, tonight’s stunt, a stunt replete with moralism and grandstanding, is uniquely cynical and hypocritical.”

The words were shocking not only because scores of people were dead, but also because Power was defending a bombing raid that had taken place on Syrian territory in flagrant violation of international law. While Syria’s sovereign government has requested Russia’s assistance, it has objected to the violation of its territory by the United States and its allies. That means the U.S. coalition has no legal right, under international law, to be operating in or over Syria.

As for the “no-fly zone” that Clinton invoked, Gen. Martin E. Dempsey, chairman of the Joint Chiefs of Staff, warned in early 2012 that it would mean mobilizing as many as 70,000 U.S. military personnel to neutralize Syria’s extensive anti-aircraft network – and that was before Russia decided to buttress Syria’s defenses by installing sophisticated S-300 and S-400 missiles. A “no-fly-zone” also would be an act of war in which the U.S. would not only have to fire on Syrian forces, but on Russian and Iranian forces, too. Instead of peace, the result would be a vast escalation.

Finally, Clinton’s reflexive Russia-bashing showed just how bellicose her worldview has become. If Trump was the first person in a presidential debate to threaten a rival with jail, Clinton was the first to label her opponent an agent of a hostile foreign power.

Yet, Clinton’s efforts to blame Russia for the Syria debacle make little sense. After all, Russia didn’t enter the war until September 2015, more than four years after the blood had started to flow. Rather than ambitions and aggressiveness, it’s clear that it concerns are far more practical. Russian President Putin knows all too well that if Assad falls, it will be a repeat of the Taliban victory in Afghanistan in 1996, but on a far grander scale.

Russia recalls how, after the Afghan war, radical Wahhabi-style Islam spread out from Afghanistan and reached up into Central Asia. Russia also recalls how the CIA and Saudi Arabia inflamed and used the Chechen insurgency to weaken Russia. …

But equally, President Putin shares the perception of many in the region that America and its allies are not serious about defeating ISIS. And sensing that the West was finally about to be lured by Turkey toward a no-fly zone – which would only end, as it did in Libya, in chaos – Putin played his surprise hand: he entered the war on ‘terrorism,’ blocked Turkey’s project to ‘re-Ottomize’ northern Syria, and challenged the West to join with him in the venture.

The idea was to force the U.S. into waging a real war against violent Salafists who were threatening Russia via its soft underbelly. If so, the effort backfired since the only thing it accomplished was to anger Washington’s hardline foreign-policy establishment, which will undoubtedly be beside itself with fury if the rebels in east Aleppo are defeated.

Trump, fatuous businessman that he is, mostly seemed lost in a fog of his own making. Once or twice, though, he seemed to have a glimmer of an idea of what was at stake. “Now, she talks tough,” he said of Clinton:

She talks really tough against Putin and against Assad. She talks in favor of the rebels. She doesn’t even know who the rebels are. You know, every time we take rebels whether it’s in Iraq or anywhere else, we’re arming people. And you know what happens? They end up being worse than the people [they overthrow]. Look at what she did in Libya with Gaddafi.  Gaddafi is out. It’s a mess. And by the way, ISIS has a good chunk of their oil. I’m sure you’ve probably have heard that. It was a disaster. The fact is almost everything she has done has been a mistake and it’s been a disaster.

Trump’s comment was correct, more or less. Either Clinton doesn’t know who the rebels are or is so consumed by enmity for Putin and Assad that she doesn’t care.

Trump was also right that rebels often turn out to be worse than the strongmen they topple. In real life, Muammar Gaddafi was a grotesque goon. But compared to some of the Salafist head choppers who have filled the resulting power void in Libya, he seems more like Desmond Tutu in retrospect.

Much the same can be said for Assad.  Arguably, he is little more than a Syrian Michael Corleone. But after somehow managing to survive five years of a U.S.-Turkish-Saudi onslaught – and in comparison to the barbarous Al Qaeda and ISIS fanatics operating in Syria – he now seems like Nelson Mandela.

In any event, Hillary Clinton has made it crystal clear. Anyone who votes for her is voting for greatly expanded warfare in the Middle East and probably military confrontation with Russia elsewhere as well. As bad as things are in Syria, in a few months they could get a lot worse. Don’t say you weren’t warned.

[For more on this topic, see Consortiumnews.com’s “Yes, Hillary Clinton Is a Neocon.”]

Daniel Lazare is the author of ‘The Velvet Coup: The Constitution, the Supreme Court, and the Decline of American Democracy’ (Oct 2001); ‘America’s Undeclared War: What’s Killing Our Cities and How We Can Stop It’ (April 2001); and ‘The Frozen Republic: How the Constitution Is Paralyzing Democracy’ (June 1997). His articles on the history of right-wing nationalism in Ukraine can be found on the website of New Cold War.org, including: Who was Stepan Bandera? (Sept 2015) and Timothy Snyder’s Lies (June 2014).

Brushing aside key issues, the second presidential debate took U.S. politics to new lows with Hillary Clinton bashing Donald Trump over his abuse of women and bigotry toward others while Trump vowed to put her in jail.