As reckless as George W. Bush: Hillary Clinton helped create disorder in Iraq, Libya and Syria — and, scarier, she doesn’t seem to understand how 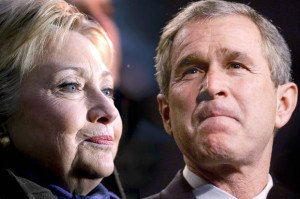 As of the voting in various primaries last week and this week, Hillary Rodham Clinton has the surest way to the White House of any candidate who seeks the presidency from either of the major parties. She may not complete the journey, it is true. But even the most ardent Bernie Sanders supporters must now recognize that a lot of brush has been cleared from her path, and 1600 Pennsylvania Avenue may once again be Clinton’s address.

It is time, then, to bear down on Hillary Clinton yet more than we have and determine just who she is and what a Clinton II presidency will be all about. Forget the frivolous attacks of rightists. Those who might be inclined to vote for Clinton are the responsible parties now. They must bear down on themselves, so that we can rid the forward-thinking side of our political conversation of its many encrustations—its mythologies, conventions, orthodoxies and the stale assumptions that have been placed over many years in some zone wherein they are taken to lie beyond questioning.

As you may surmise, I take the prospect of a Clinton II era to be a grave matter. It is not that she is a pathological variant of the political shape-shifter, to borrow a phrase from Charles Blow’s excellent column on the collapse of American ideals in the march 7 New York Times. It is Clinton’s consistency that should concern us most.

This is a dangerous figure, and I use the word advisedly, not rhetorically. Over eight years as First Lady, eight more as a New York senator and four as secretary of state, Clinton has proven repeatedly abusive of social order and careless of human life. It is time we face these facts and act accordingly. This holds especially for those given to false consciousness or lesser-of-evils arguments as they decide what to do next November 8.

I make special reference to American conduct abroad when I consider the prospect of a Clinton II presidency. Two reasons.

One, President HRC, in the event there is one, is destined to make very little difference in the domestic context.  Thoroughly captive to the banks, corporations and special interests that have paved her political road for decades, Clinton will get next to nothing done in any of the countless domestic spheres wherein so much needs to be rectified. She has told us this herself, if subtly.

Some weeks ago, Michelle Alexander published an instantly celebrated piece in The Nation that demolished the reputation Clinton shares with her husband as an advocate for women, the disadvantaged and minority communities in America. I would not change a syllable of Alexander’s argument. We must attend to it closely; it should be an orientation document for those who will cast votes in this election. So should an essay by Liza Featherstone that The Nation also published recently.

Scrupulously diminished ambition, a narrow definition of the possible and a condescending dismissal of new thinking solely because it is new are elevated to principles in the Clinton campaign. One would have to be deaf not to hear “We can act only at the margins” as Candidate Clinton’s prudential leitmotif.

As anyone who looks out the window with clear eyes knows, this is effectively a prescription for continued regress. Clinton is another Nero. She simply does not register what time it is, and it is past time for incremental trench warfare with irrational rightists and brazen dismissals of the urgency of the present moment in American politics.

Clinton offers yet less prospect of substantive change on the foreign side, and here the need is very arguably more urgent.  Much of the world is in chaos. Parts of it burn. South to north, east to west, many millions of desperate, displaced people swarm over it in search of safe haven. In several places there are regional wars, and global conflict could ignite in others. Societies and the earth itself have tolerances, just as machines do, and the present forms of violence and disorder now active against both far exceed these tolerances.

No one can seriously question Hillary Clinton’s influential role in creating the disorder that envelops us. Yet Clinton shows no sign of understanding our condition as it is or her place among its creators. The element of denial in her foreign policy platforms is self-evident. She brings no new tools to our crises and has no new thoughts. To assume that such tools are unavailable and that such thoughts cannot be thought is likely to prove a fatal mistake in this election.

Clinton manifests but one foreign policy premise: American primacy must be sustained at all cost. In this she is the liberal exceptionalist par excellence. Her tools to this end remain the Pentagon, the intelligence services, diplomacy by intimidation, bribery when it serves the desired purpose and straight-out coercion when it does not. Anyone who can add to this list is invited to use the comment box.

I am hard pressed to suggest what it will be like for Americans and all others to endure a Clinton II presidency. It is easy, on the other hand, to imagine that any forecasts one may come up with will fall short of the reality. But let us leave the precise future to the future, as we are likely to arrive in it soon enough.

In any case, we have another question before us now. It is this: How did we get here? How can so many of us eagerly await a president who has already proven more given to imperial adventure than any postwar leader other than Richard Nixon and Bush II—and far more hardened into ideological rigidity than Nixon was?

President Obama brought a new attitude to America’s conduct abroad, but he has done shockingly little to improve on Bush II’s record. In some respects, he has worsened things, just as Bush II worsened what Clinton I handed him, and Clinton I worsened what Bush I handed him, and so on at least as far back as Kennedy. (And I exclude neither Johnson nor Carter.) There is a malign momentum in the conduct of American foreign policy that must be broken. In this regard, Hillary Clinton holds out no prospect other than continuity.

Other questions: How can any of us fail to recognize that American foreign policy, never right since it was structured as imperial strategy in the late 19th century, is now a net contributor by a long way to an acute crisis of global disorder? How can anyone view Hillary Clinton in this context and come up with the idea of voting her into the White House?

I have already suggested my answers: mythologies, orthodoxies, muddled thinking, no thinking. And I have used the word “urgent.” Yes, it is urgent we get ourselves beyond these impediments to achieve a clear view of where we are and what to do about it.

Patrick Smith is Salon’s foreign affairs columnist. A longtime correspondent abroad, chiefly for the International Herald Tribune and The New Yorker, he is also an essayist, critic and editor. His most recent books are “Time No Longer: Americans After the American Century” (Yale, 2013) and Somebody Else’s Century: East and West in a Post-Western World (Pantheon, 2010). Follow him @thefloutist. His website is patricklawrence.us. 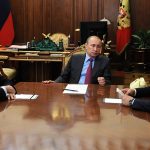 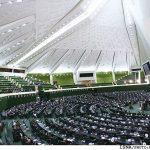 How Iran views the Russian withdrawal from SyriaMultipolarity