Recently, Crimea celebrated the second anniversary of its reunification with Russia, marked on the day of the referendum that ended the Ukrainian occupation. Much has been written about the political and geopolitical aspects of the reunification as well as the social sentiments of the people, but little has been said about the economy. I want to lift the lid on that because the results of the economic transition are in fact quite impressive, especially considering the arduous hurdles that had to be overcome in the process.

The transition from the Ukrainian economy to the Russian one meant a transfer from a much less developed economy with a significantly lower price level to a more mature economic environment. Under Ukrainian rule, the black market and corruption were widespread and tax collection a rare occurrence. The problems were compounded by a dramatic suspension of the whole banking system as the Ukrainian banks left the peninsula, to be slowly replaced by Russian banks. Hereby, for fear of sanctions, the major Russian banks abstained. Trade and logistics patterns were disrupted and new ones had to be created with the Russian mainland, while the direct land access to Crimea from Russia was cut off due to the civil war in Eastern Ukraine.

The first nasty act of humanitarian war occurred when the Ukrainian regime cut off the main water supply to the North Crimean Canal by blocking it with a dam.

At the same time, the Crimeans were punished for their democratic choice by the Western powers, which slapped severe sanctions on Crimea virtually prohibiting all trade and investments, the way the U.S. had punished the Cuban revolution.

A new wave of problems started when the Ukrainian regime became increasingly frustrated with the apparent success of the breakaway republic. They virtually prohibited their citizen to travel to Crimea, then they moved on to declare a trade embargo. When nothing worked, in a last desperate effort they cut off the electricity supplies in November 2015 as so-called  “activists” blew up the electricity pylons that supplied Crimea, a Ukrainian state-sponsored act of sabotage.

But the Ukrainian saboteurs increasingly remind me of the cartoon villains who continuously go after the lucky-go-happy hero, only to have the joke on themselves. That was the case with their food embargo, which only blew back on the Ukrainian farmers and traders, and so it was with electricity. With great foresight, President Putin had launched an underwater electricity transmission line from the mainland across the Kerch Strait. Working against the clock, the Russians were able to open ahead of schedule in early December the first of four cables. The second leg opened in mid-December, thus neutralizing the Ukrainian threat. The remaining two lines are due for April and May respectively.

‘Lucky-go-happy’ is an understatement. More correctly, I would characterize the Russians in this respect as ‘lucky-go-smart’, masterly handling the whole political and economic transition. Let’s look at the economic facts.

Wages running ahead of prices

Crimea suffered in 2014 and 2015 from seemingly runaway inflation totaling 70.1% for the two years. This would be very bad news if not for the fact that at the same time, nominal salaries rose by 112%, thus the real salaries rose by some 40%. What is remarkable is that the salaries in Crimea grew faster than anywhere else in Russia. From January to December 2015, average monthly salaries grew from 17,000 rubles to 30,000 rubles. Real wages actually declined in Russia on an average, while Crimean wages at the beginning of 2015 were at 57% of the national average but reached 70% in December. What this tells, then, is that Crimea has successfully undergone a period of adaptation to the higher Russian price levels in leaving behind the Ukrainian economic structures.

In the same period, inflation in the Ukraine was 68.2%, but contrary to the case of Crimea, the Maidan coup translated into sinking salaries with 16.5% real decline for the two years. The net result is then that the Crimean workers gained 50% over their Ukrainian peers.

The factories are up and running again

Industrial production grew by 12.5% on the year in 2015, and with a whopping 25% in December year-on-year. The extraordinary positive dynamics continued in 2016 with a record gain of 32.2% for January-February.

The construction industry also reported impressive results with a value growth of 73.9% after considering the effects of inflation, with completion of 249 thousand square meters of new housing.

The agriculture and food industry have not fared as well, with a 13.4% contraction in 2015, including a bigger 19.3% decline in livestock production. In crop farming, there were two contradictory trends: cereal crops were up by one sixth while garden plants and wine grapes were down.

The drop in grapes was the result of an unusually cold January. A combination of other reasons affected the agriculture in general, which all derived from the interruption of economic relations with the Ukraine and problems with water supplies, caused by the Ukrainian diversion of the water duct that used to supply Crimea. These problems will all be overcome in due course with alternative supplies being arranged from mainland Russia and new investments, including with significant state subsidies. For example, an investment in a pork production facility will grow already this year the total Crimean industrial capacity for this meat by 35% (corporate produced, excluding homesteads). Another project will raise the production of milk one and a half times (excluding homesteads).

The tourism industry is coming along very nicely, indeed, with a 21% growth of visitors in 2015 bringing the total to 4.6 million for the year. This is often contrasted with the six million tourists who used to visit before the liberation, of whom four million were Ukrainians. The comparison is, however, quite misleading as the purchasing power and habits of that segment of Ukrainian visitors was quite different. They did not require a high standard of service in accommodation and catering and so did not bring in a profitable business and thus did not stimulate investments. Already in the difficult transition year of 2014, the proceeds from the tourist industry doubled to a value of about $1.5 billion from the level of the Ukrainian years of $700 million.

This year promises to be even better with an expected 20% growth of both amount of visitors and prices (net increase about 10% considering inflation). What is interesting is that Russians have taken to visit Crimea all-year round and not only in the hot summer months.

This hardly tallies with the grim picture that Reuters wanted the world to believe in its propaganda piece dedicated to the 2nd anniversary of the liberation, or “annexation”, in their Orwellian parlance. This is the Reuters version: “Crimea once prospered as a Black Sea tourist hub. Now its businesses are starved of tourists and international investment is barred by Western sanctions.”

Russia has been quick to ensure that all possible ways of bringing visitors and supplies to the peninsula have been explored and used. As a result, five million passengers traveled by air to and from the regional capital Simferopol, almost doubling from the previous year. There are now direct flights with competitive prices from all major Russian cities, with 70 flights monthly from Moscow alone, even in March.

In addition to that, the ferry across the Kerch Strait shuttled 4.7 million tourists.

The bridges, and other infrastructure 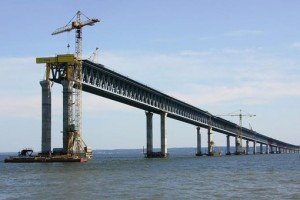 Future bridge across the Kerch Strait, pictured under construction in 2015

The big one that everyone is waiting for is the Bridge, the bridge over the Kerch Strait that has been promised for completion in December 2018 with full traffic in 2019. The way things are going, I would expect it to be ready even earlier, that seems to be the Putin-way of making things, as it was with the electricity supplies.

Interestingly, the cost of the Bridge seems to be so competitive that the Western propaganda center has so far not cared to produce a Nemtsov-Navalny style report on the “horrendous cost and corruption” in connection with it, as they did on the Sochi investments.

The Bridge when completed will have an enormous effect on the economy of Crimea and all aspects of life, but there are other very important infrastructure investments as well.

Another bridge, the energy bridge as the Russians call the electricity cables drawn underwater across the Kerch Strait have already been completed to a large extent. I already reported above on the success of this project. In addition to the electrical transmission lines, three electricity power stations will be constructed or reconstructed by 2018, after which Crimea will have surplus power for significant growth of the economy.

Furthermore, Russia is in the process of laying an undersea gas pipeline to Crimea. The investment is estimated at 20 bn rubles (~$300 million) with a completion by 2018.

The Bridge is accompanied with construction of a new highway between Kerch and Simferopol as well as other roads.

The Russian liberal faux-opposition has a cant that goes like “Stop feeding Crimea”, an adaptation of Alexey Navalny’s original “Stop feeding the Caucasus”. Based on the results of my little investigation into the reality of the Crimean economy, I would rather turn the question around and tell that what actually happened is that by aiding Crimea, Russia “Stopped feeding the West.” By that, I mean that the economic results of the investments in the reunification are overwhelmingly positive. The infrastructure projects reported above come with an approximate cost of 700 bn rubles (approximately $10 bn). On top of that, Russia has supported the regional budget of Crimea by a couple of billion dollars in 2014 and about one billion in 2015, approximately the same level could be expected for this year.

But, the interesting fact is that all these investments have already been paid back in one year in 2015. Proceeding from the economic logic of the opponents of reunification, I compare the savings of Russia on outbound tourism to the investments in Crimea. As three million more Russians tourists traveled to Crimea instead of going abroad, the national economy saved about $10 billion in 2015 and probably 12 to 15 billion in 2016. Thus the savings from 2015 covered the whole infrastructure investment program in Crimea up to 2020 as well as the budget transfers. The 2016 savings will then cover the next ten years of budget transfers, if any will be needed. And each coming year after that the whole amount of savings translates into a profit for the national economy.

By the way, this is not fantasy, but economic facts confirmed by the balance of payment statistics of the Central Bank of Russia. The statistics show that expenditure on outbound tourism was down in 2015 over the previous year by some $25 billion. Luckily, there are enough savings to feed Sochi, other Krasnodar resorts, and many other beautiful parts of Russia.

Crimeans will hardly pine for the bad old Ukrainian days when the central government invested annually about $120 million in the economy, as reported by the ousted former prime minister Nikolay Azarov. 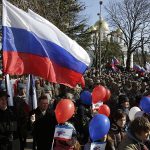 Russian Congress of Canada: ‘Respect the decision of the Crimean people to rejoin Russia’Crimea, Feature Articles 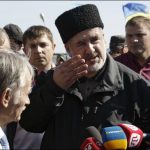