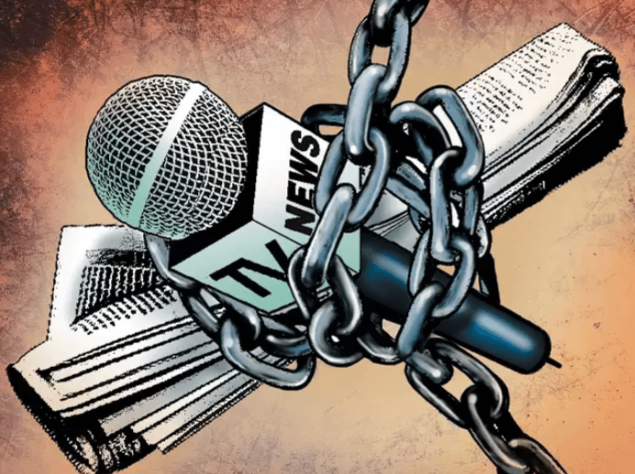 On December 3, the Latvian State Security Service searched the apartments and detained seven Latvian journalists, writing in Russian. Their articles were published by news agency Baltnews.lv. Among them are Andrey Yakovlev, Vladimir Linderman, Andrey Solopenko and Alla Berezovskaya.

On December 3, the Latvian State Security Service searched the apartments and detained seven Latvian journalists, writing in Russian. Their articles were published by news agency Baltnews.lv. Among them are Andrey Yakovlev, Vladimir Linderman, Andrey Solopenko and Alla Berezovskaya.

After their apartments were searched, all the office equipment and means of communication were seized (including those of their family members), afterwards they were interrogated in the premises of the State Security Service. After the interrogations the journalists were released, but their equipment, bank cards and money in cash were not returned.  On the same day, all pages of Baltnews on Facebook were blocked.

Following the interrogations, all journalists were declared suspected of violating policies concerning EU sanctions against Russia.

The official statement of the State Security Service (SSS) says “The procedural activities were performed within the criminal proceedings led by SSS and initiated on 16 January 2020 pursuant to Section 84 Article 1 of the Criminal Law (for the violation of sanctions imposed by the United Nations, European Union and other international organisations or sanctions imposed by the Republic of Latvia). The information obtained from the investigation provides ground to suspicion that economic resources were passed onto a person who is subject to the European Union sanctions for activities which undermine the territorial integrity, sovereignty and independence of Ukraine”. (https://vdd.gov.lv/en/useful/publications/vdd-performs-procedural-activities-related-to-violation-of-international-sanctions.art198).

The sentence foreseen for this crime is up to four years of imprisonment.

According to SSS, the work of the journalists provided that “economic resources were passed onto” Dmitry Kiselyov, who is as a person included to the personal sanctions list. However, Mr. Kiselyov is not an owner of the news agency Baltnews.lv. This agency is a part of state holding “Russia Today”, and the holding itself is not a subject of the sanction regime. Mr. Kiselyov is indeed one of the managers of this holding, but there is no logical reason to assume that journalist’s work for a state media can provide personal “economic resources” to its manager.

In order to understand the real reasons of these repressions we have to take a look at recent developments of situation with Latvian media publishing or broadcasting in Russian. These media are providing information for the Latvian public whose native language is Russian representing almost 40% of the whole population.

During the past 10 years the media market in Latvia has declined. A major part of local newspapers in Russian disappeared from the market, and some local journalists found a new job in the online media of  neighbouring Russia. All seven persons who were detained by the State Security Service on December, 3 are Latvian residents working for diverse media of the Russian Federation.

Since the beginning of this year, the Latvian authorities launched a mass scale campaign against media working in the Russian language.

The Latvian TV-channel “The First Baltic Channel” broadcasting in Russian came under  pressure from state institutions. They had to stop producing and broadcasting local news as of March 20, 2020.

On June 11, 2020 the Latvian Parliament excluded a major part of TV channels broadcasting in Russian from the main broadcast package of local cable operators. It is crucial to realise that the aim of these new restrictions was not a fight against the “Russian state propaganda on TV” but limitation of all TV channels broadcasting in Russian, even the ones belonging to the opposition or being “pro-Western”, cultural or educative.

In November, 2020 the Latvian authorities decided to stop from 2021 broadcasting in Russian in state owned channel LTV-7.

Therefore we can assume that the recent arrests of local journalists writing in Russian fits perfectly in the main state strategy of suppressing and complete destruction of local media in Russian.

The well-known Latvian journalist Alla Berezovskaya writing for diverse Latvian Russian newspapers for 35 years, commented on the recent repressions as follows: “How can a musician be blamed for playing? A poet for writing poems? A journalist for writing news and analysis? How can it happen in democratic Latvia in the 21st century? I see it as a war launched against us. A war is a war, it requires prisoners and captures the spoils of war. Fortunately, friends helped by giving away their old computer…”

We need the assistance of the international community to pressure Latvian authorities to enter into a constructive dialogue with the Russian-speaking minority instead of political intimidation.

Dr. Tatiana Zdanoka is a Member of the European Parliament

Mirsoslavs Mitrofanovs is a member of the Riga City Council