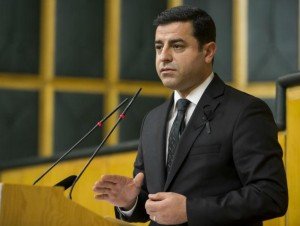 Demirtaş, whose party is frequently accused by both President Recep Tayyip Erdoğan and the government of siding with the outlawed Kurdistan Workers’ Party (PKK), described the attack as a “massacre that makes the blood run cold.”

“A terror attack that is understood to have entirely targeted civilians was launched. Once more, on behalf of my party and its members, I want to state that we curse and condemn the attack. It was an atrocity that can never be justified for any reason,” Demirtaş said on March 15, speaking at a parliamentary group meeting of his party.

On Feb. 17, after a suicide bomb targeted a military convoy in Ankara and killed 29 people, the HDP did not sign a joint condemnation released by the other three parties at parliament.

On March 15, Demirtaş said the reason for not signing that condemnation was because the text of the joint proposal did not make any reference to previous attacks, including the suicide attack that killed at least 100 people attending a peace rally in Ankara on Oct. 10, 2015. That incident was the deadliest attack in Turkey’s history and was blamed on the Islamic State of Iraq and the Levant (ISIL).

The HDP co-chair also stated that his party’s proposal to establish an inquiry commission into the attacks was refused, with objections from the ruling Justice and Development Party (AKP) and the Nationalist Movement Party (MHP).

“A massacre takes place and they say, ‘Let’s draft a joint statement and save our faces.’ Can such cheapness exist? ‘Let’s come together as groups in parliament and release a one-page text ignoring the government’s responsibility.’ Is it the job of a legislator or a party leader to ‘condemn’?” Demirtaş said.

Three of the four political parties represented in Turkey’s parliament have published a joint declaration condemning terrorism after a suicide attack hit central Ankara on March 13 and killed at least 37 people, however, the Kurdish problem-focused Peoples’ Democratic Party (HDP) declined to sign the document.

“We say that expressing and sharing this common grief is more important than any political or ideological attachment,” the statement signed by the ruling Justice and Development Party (AKP), main opposition Republican People’s Party (CHP) and the Nationalist Movement Party (MHP) on March 15 said.

The declaration argued the acts of terror targeting the country originated from “historic aims against the republic’s unity” and hoped to destroy the idea of a common future by creating bitterness and weariness among its people.

The parties also underlined that Turkey was part of a “complex and problematic region,” and called for calm and caution by all persons and institutions in the face of terror attacks.

The group deputy chairpersons of each of the signee parties, Naci Bostancı of the AKP, Levent Gök of the CHP and Oktay Vural of the MHP, signed the statement on behalf of their parties.

The only political party which did not agree to sign the declaration was the HDP, the third largest party in parliament, which argued that releasing a joint declaration only served to evade parliament’s responsibility to prevent the recurrence of such attacks.

“The parliament is the place to solve problems. To confine oneself to releasing a declaration after attacks is not an answer to problems,” the group deputy chairpersons of the HDP, Çağlar Demirel and İdris Baluken, said at a press briefing released in response to the declaration.

Insisting on releasing a joint declaration was a “fascist indicator” of an attempt by the AKP government and the presidency to “exculpate” themselves after failing to prevent an attack, the HDP claimed. The party also called on parliament to form a commission to tackle the issue of terrorism.

Turkish President Recep Tayyip Erdoğan said late March 14 that “some circles, at home and abroad,” had to make a choice between siding with the state or with terrorists.

“There is no middle way,” he said while also expressing his desire to broaden the definition of terrorism to include “accomplices” – including MPs and intellectuals – who allegedly support acts of terror.

… Chris Stephenson, a lecturer in computer science at Istanbul’s Bilgi University, was taken into custody in Istanbul on March 15, after he went to the Istanbul Police Department in a show of support for three Turkish academics detained on March 14. The three academics had been detained in relation to an investigation into signatories of a petition calling for an end to clashes between security forces and PKK militants in January, and they were set to appear at court on March 15. 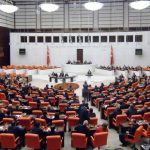